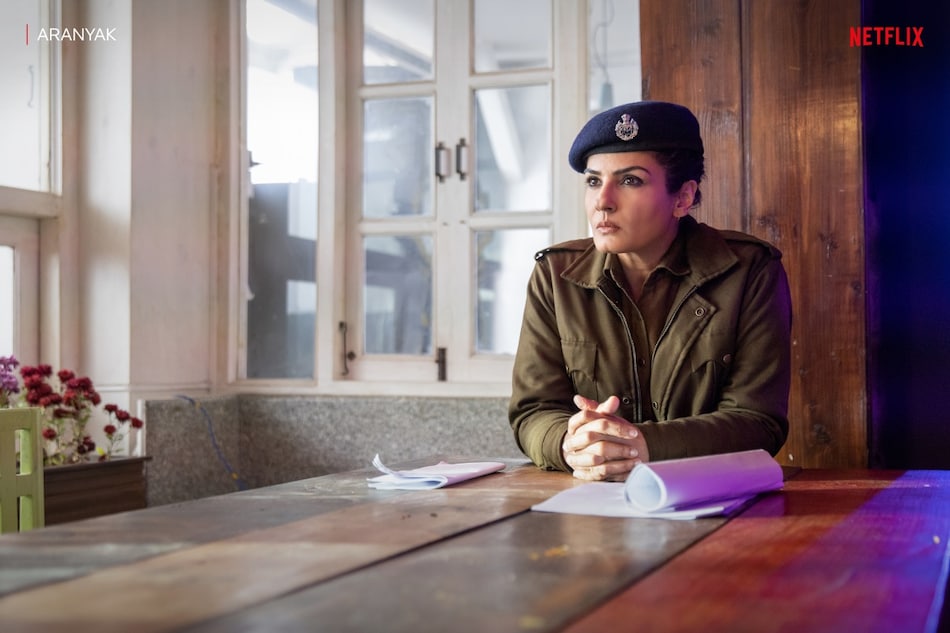 Alongside, Netflix unveiled new seasons of seven existing series that you can read about above. The remaining three series have been announced earlier, though we're getting new titles, cast members, or first looks alongside, as is the case for all the new originals as well. They are the Mumbai-set drama Bombay Begums from Alankrita Shrivastava (Lipstick Under My Burkha) and starring Pooja Bhatt in the lead, the Madhuri Dixit Nene family drama which now has a title: Finding Anamika, and the Anushka Sharma-produced crime drama Mai led by Sakshi Tanwar.

The slate of 15 Indian original series were part of Netflix's “See What's Next India” event on Wednesday, where the world's largest subscription streaming service unveiled a slate of 41 titles — across original series, films, documentaries, reality TV, and stand-up comedy specials — most of which will release in the 2021 calendar year.

On Aranyak, starring Tandon, after a foreign teenage tourist disappears in the misty Himalayan town, a harried, local cop Kasturi must join hands with her city-bred replacement Angad, on a big-ticket case that digs up skeletons and revives a forgotten Himalayan myth of a bloodthirsty, serial killing entity in the forest. Parambrata Chatterjee, Ashutosh Rana, Zakir Hussain, and Megna Malik also star. Sippy is the showrunner, Vinay Waikul the director, and Charudutt Acharya the writer. Aranyak is a production of Roy Kapur Films and Ramesh Sippy Entertainment.

Decoupled, from Joseph (A Serious Men), follows Arya Iyer, a man who suffers from chronic objectivity, extreme clarity and the debilitating capacity to see in any situation what others are trained to ignore. It gets him in trouble with people wherever he goes. Naturally, his marriage is over, but he has persuaded his estranged wife (Surveen Chawla) to continue living with him in a large villa in Gurgaon to create the myth of family for their tween daughter, who is terrified of their divorce.

Arya, as the second highest-selling pulp fiction writer in India after his old foe Chetan Bhagat, is a celebrity who has everything a man wants — fame, money, a daughter who adores him, a home run by a woman and a hot young girlfriend. Yet, he is always somehow fleeing a crisis. Mining from the banal realism of daily life, Decoupled is an uncompromising comedy about the true nature of people, India and marriage.

Joseph created Decoupled, and Hardik Mehta (Kaamyaab) is set as director. Decoupled is a production of Bombay Fables and Vikramaditya Motwane's Andolan Films.

Ray, previously announced as X-Ray by Voot in 2018, is an anthology series based on Satyajit Ray's short stories, in a contemporary setting. The episodes will vary vastly in genre and style, and will be “full of thrills, twist and turns and a strong emotional core”. Srijit Mukherji, Vasan Bala, and Chaubey have directed the four episodes. Niren Bhatt and Siraj Ahmed wrote. Ray is a production of Viacom 18's Tipping Point.

The Yeh Kaali Kaali Ankhein synopsis states: “Think of the most dreaded villain! What if he has a daughter who truly, deeply, madly falls in love with you? What if you don't love her back? What if you are in love with someone else? How will you say no and get out of the situation? After all, quite like her father, she's not likely to take 'no' for an answer. A romantic simpleton finds himself in the middle of this crossfire in Yeh Kaali Kaali Ankhein, a dark comical pulpy desi thriller about three things that matter the most in the country: paisa, taqat aur pyaar.”

And the three Netflix Indian series we have previously known about —

Bombay Begums — out March 8 on Netflix — was announced in July 2019, and was also part of Netflix's last big Indian announcement when it unveiled 17 titles. It follows Five women across generations as they wrestle with desire, ethics, personal crises and vulnerabilities to own their ambition in contemporary urban India. As glass ceilings are shattered, and hearts are broken, difficult choices have to be made. And as each woman strives to find her own truth, they find in each other an unexpected understanding, and the sliver of a bond.

Finding Anamika, with Dixit Nene in the lead, was announced in December 2019. It's now being described as a suspenseful family drama about a global superstar, wife, and mom who suddenly vanishes without a trace. As police and loved ones search for answers to her disappearance, her perfectly crafted facade is stripped away, revealing hidden truths and painful lies in the life of an iconic actress.

Mai, from Anushka and Karnesh Sharma's Clean Slate Films, was announced in July 2019. In it, following a personal tragedy, Sheel (Tanwar), a docile 47-year-old wife-and-mother finds herself accidentally entangled in a web of white-collar crime and dirty politics pushing her into a rabbit hole of violence that forever changes her and the world she inhabits.

Netflix Renews Fabulous Lives of Bollywood Wives, The Big Day for Season 2
10 Reasons Why You Should Upgrade to Samsung Galaxy S21 | S21+ This Year