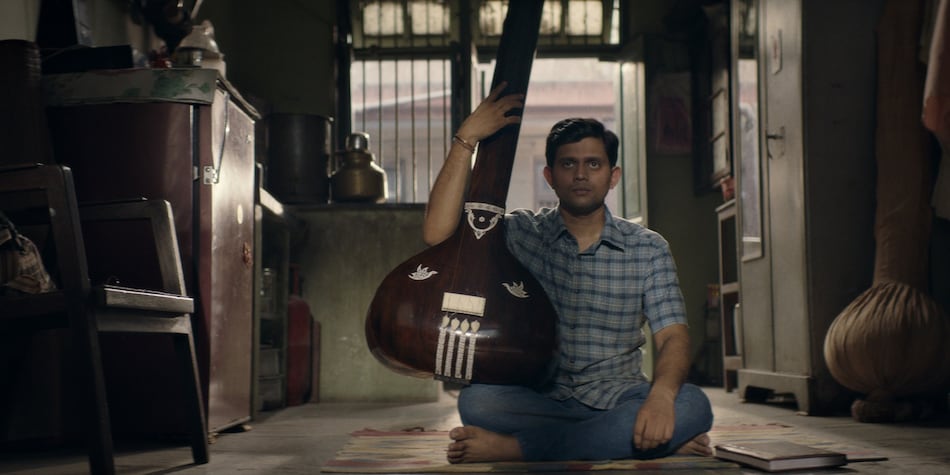 Aditya Modak in The Disciple

Netflix is going to have a big April in India: it has announced four originals from the country. Chaitanya Tamhane's award-winning drama The Disciple — executive produced by Alfonso Cuarón — closes out the month on April 30. Ajeeb Daastaans, a Karan Johar-produced anthology starring the likes of Aditi Rao Hydari, Jaideep Ahlawat, Fatima Sana Shaikh, Konkona Sensharma and Shefali Shah, drops April 16 on Netflix. The Johar-produced hourlong documentary Searching for Sheela — about the infamous Ma Anand Sheela, who worked for Osho — arrives April 22. And the wedding reality series The Big Day returns in less than two months on April 7 with its second collection. There's a couple more too, but they are not “Netflix originals”: Fahadh Faasil is stuck in the whodunit Irul, releasing April 2, and Yogi Babu-led darkly comedic social drama Mandela drops April 5.

Internationally, on April 23, we'll get the Shadow and Bone series based on Leigh Bardugo's best-selling dark fantasy Grishaverse novels. April 14 brings the monster adventure movie Love and Monsters — led by Dylan O'Brien and Jessica Henwick — to India, six months after its US video-on-demand release. A similar thing happens with the Sarah Paulson-led psychological thriller Run, which released in November on Hulu and arrives April 2 on Netflix. As is also the case with crime drama The Serpent; it premiered in January on BBC One and comes to Netflix on April 2. Two Stranger Things stars appear in Netflix movies in April: Caleb McLaughlin is opposite Idris Elba in Concrete Cowboy (April 2), while Natalia Dyer is alongside Amanda Seyfried in Things Heard & Seen (April 29).

From The Big Bull to Mortal Kombat, What to Watch in April

There are some American comedies worth keeping an eye out for as well. Melissa McCarthy and Octavia Spencer suit up in the superhero spoof Thunder Force, releasing April 9 on Netflix. Jamie Foxx is the creator and star on the sitcom Dad Stop Embarrassing Me! — premiering April 14 — inspired by his his relationship with his daughter. And finally, The Lego Movie directors Phil Lord and Chris Miller (as producers) bring us The Mitchells vs. The Machines, a new animated family action comedy featuring the voice talents of Abbi Jacobson, Danny McBride, and Maya Rudolph.

Beyond Netflix originals, April brings a number of critically-acclaimed and beloved (licensed) titles too. On April 1, we saw the likes of Shrek, Everest, Zodiac, GoodFellas, Steve Jobs, Schindler's List, How to Train Your Dragon, and The Curious Case of Benjamin Button. While Godzilla vs. Kong romps its way in theatres and on HBO Max, its predecessor Godzilla: King of the Monsters is moving from Prime Video to Netflix on April 10. That is also the case for a few other Warner movies, including It Chapter Two (also April 10), Pokémon Detective Pikachu (April 17), and the Joaquin Phoenix-led Joker (April 20). Also on April 20, the How to Train Your Dragon closing chapter, The Hidden World, also arrives on Netflix India.

With that, here's the full list of movies and TV shows coming to Netflix India in April 2021. We've marked Netflix Original titles in bold for your convenience.

April 6
The Last Kids on Earth: Happy Apocalypse to You 🇨🇦

April 8
The Kitchen (2019)
Story of Kale: When Someone's in Love
The Way of the Househusband: Season 1 🇯🇵

April 10
Don't be the First one: new episode
Godzilla: King of the Monsters
It Chapter Two