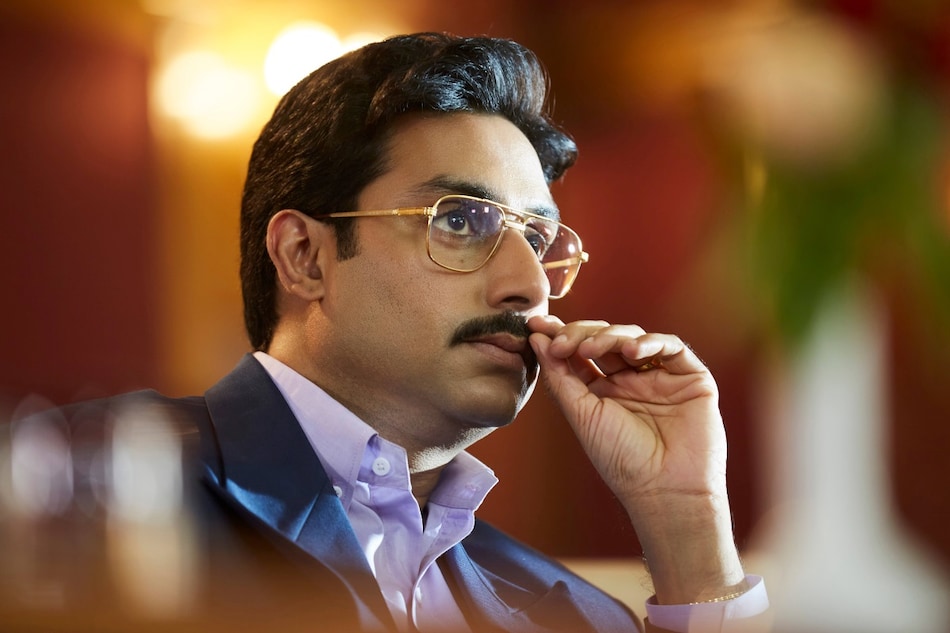 Abhishek Bachchan in The Big Bull

The Disciple, Chaitanya Tamhane's award-winning drama, looks set to be the Indian highlight in April 2021 — it's out on Netflix at the end of the month. There are a bunch of big names outside of that. The Harshad Mehta story gets a Bollywood movie treatment after getting a series in Scam 1992, with Abhishek Bachchan in the lead on The Big Bull, releasing April 8 on Disney+ Hotstar. Karan Johar gives us anthology movie Ajeeb Daastaans — on April 16 — from four different directors that feature actors such as Aditi Rao Hydari, Jaideep Ahlawat, Konkana Sensharma, and Shefali Shah. Farhan Akhtar is producing a bizzarro comedy called Hello Charlie, out April 9. And Fahadh Faasil has two movies releasing five days apart.

Internationally, we're getting a new Mortal Kombat movie on April 16, a week before it drops on HBO Max. Kate Winslet returns to TV after a decade with HBO miniseries Mare of Easttown, premiering April 19. Idris Elba is an urban cowboy in Netflix's Concrete Cowboy, dropping April 2. Michael B. Jordan is gunning for vengeance in Without Remorse, April 30 on Prime Video. Joss Whedon's new superhero series The Nevers is also from HBO, coming April 12. Anna Kendrick is an astronaut headed to Mars in Stowaway, on Netflix April 22. Justin Theroux moves to the jungle in The Mosquito Coast, premiering April 30 on Apple TV+.

Idris Elba plays an absent father to a 15-year-old rebellious son (Caleb McLaughlin, from Stranger Things) in Ricky Staub's debut movie that is based on Greg Neri's 2011 young adult coming-of-age novel “Ghetto Cowboy” that gives us a peek into the urban African-American horseriding culture present in the American city of Philadelphia. It got fairly favourable reviews when it premiered at Toronto International Film Festival last year.

Fahadh Faasil, Soubin Shahir, and Darshana Rajendran lead this self-described “old-fashioned whodunit” that follows a stranded couple and a stranger caught in an abandoned and haunted house on a dark rainy night. Who is the killer and who is the victim? And what's happening with that dead body in the basement? Naseef Yusuf Izuddin makes his directorial debut.

Charles Sobhraj (Tahar Rahim) — the serial killer who preyed on tourists across Southeast Asia in the 1970s — is the topic of this eight-part miniseries co-produced by BBC One and Netflix, which charts his murderous exploits and the efforts to bring him to justice. Sobhraj spent two decades in Indian jails, and is currently serving a life sentence in Nepal. All episodes on release date.

When: April 7
Where: Amazon Prime Video

Fahadh Faasil isn't happy with being on one platform in a month (I imagine), which is why he'll also be seen in this Shakespearian Macbeth-inspired drama about an engineering dropout and the youngest son (Faasil) of a rich plantation family who, driven by father's jabs, greed and blind ambition, embarks on an ambitious plan after a family tragedy.

When: April 8
Where: Disney+ Hotstar

Abhishek Bachchan steps into the shoes of Hemant Shah (likely for legal reasons) in this feature-length take on the financial scandal that powered the critically-acclaimed 10-episode Scam 1992: The Harshad Mehta Story (on SonyLIV). That's a big ask — and The Big Bull trailer only further hints that this will be a much more Bollywood-ised take on the whole shebang.

When: April 9
Where: Amazon Prime Video

Jackie Shroff dons a gorilla suit (which means he didn't need to be on set) in this wacko comedy that follows Mumbai dreamer Chirag “Charlie” Rastogi (Aadar Jain) who's tasked with helping a financial defrauder (Shroff) escape to Dubai. Naturally, what ensues are some zany (and eye-rolling) adventures, involving a circus and a real gorilla.

When: April 9
Where: Amazon Prime Video

Emmy-winner Lena Waithe (Master of None) is a producer on this horror anthology from writer and creator Little Marvin — he makes his TV debut — that adopts the same format as American Horror Story: each season is standalone. The first one, subtitled Them: Covenant, centres on a black family that moves into an all-white Los Angeles neighbourhood in 1953.

Deborah Ayorinde, Ashley Thomas, Alison Pill, Shahadi Wright Joseph, and Ryan Kwanten are part of Them: Covenant cast. Amazon has greenlit Them for a second season.

When: April 9
Where: Netflix

Real-life best friends Octavia Spencer and Melissa McCarthy play estranged childhood best friends in this superhero spoof. After they reunite, Lydia (McCarthy) discovers that Emily (Spencer) has come up with a genetic formula to give people superpowers. Lydia accidentally triggers it and becomes super strong. Emily reveals she's invisible. They team up to fight crime in Chicago, which includes the likes of The King (Bobby Cannavale), The Crab (Jason Bateman), and Laser (Pom Klementieff).

When: April 12
Where: Disney+ Hotstar

Created by The Avengers director Joss Whedon — who has since quit the show citing exhaustion due to COVID-19 challenges, though some wondered if it's actually tied to the abuse and harassment allegations around Justice League — this superhero series is set in Victorian-era London and follows a group of gifted women, including a mysterious quick-fisted widow Amalia True (Laura Donnelly) and brilliant young inventor Penance Adair (Ann Skelly), who must protect their kind and battle brutal forces.

Whedon also served as the writer, director, and showrunner until the time he quit. On the first batch of six episodes — there will be 10 in total, but The Nevers season 1 has been split into two parts due to COVID-19 again — Whedon is credited as the writer on one and director on three. Philippa Goslett (How to Talk to Girls at Parties) is the new showrunner. New episodes weekly.

When: April 16
Where: Netflix

But what is Ajeeb Daastaans about? It explores jealousy, entitlement, prejudices and toxicity through fractured relationships that at times involve a third “other” in a two-person dynamic. The four short films will also attempt to blur the lines between what's right and what's wrong.

In this reboot of the video game movie series, an MMA fighter Cole Young (Lewis Tan) who loses for money discovers his special heritage and sets out to train with experienced supernatural warriors, in order to save his family and help defend Earth from the Outworld's otherworldly ice-expert Sub-Zero (Joe Taslim) who has been tasked to hunt Cole down.

Watch the Mortal Kombat Trailer in Hindi, Tamil, and Telugu

When: April 19
Where: Disney+ Hotstar

Kate Winslet returns to television after 10 years (her last miniseries Mildred Pierce was also at HBO) and is reunited with her co-star Guy Pearce (from Mildred Pierce). Here on the seven-part Mare of Easttown, Winslet plays a struggling detective investigating a small-town murder in the US state of Pennsylvania.

Brad Ingelsby (The Way Back) is the creator and writer. Julianne Nicholson, Jean Smart, and Evan Peters also star in Mare of Easttown.

When: April 22
Where: Netflix

Three astronauts — Anna Kendrick, Toni Collette, and Daniel Dae Kim — on their way to Mars for a two-year mission discover that a launch support engineer (Shamier Anderson) has accidentally ended up on the spaceship with them. He just wants to get back home but that's not an option. Things further spiral out of control after the life support systems are damaged, which essentially means they will suffocate before they even make it to Mars. Joe Penna (Arctic) directs.

When: April 23
Where: Netflix

Arrival and Bird Box writer Eric Heisserer is the creator, head writer and showrunner on this adaptation of Leigh Bardugo's best-selling young adult fantasy “Grishaverse” novels — five books across a trilogy (Shadow and Bone) and a follow-up duology (Six of Crows) — that draw on Russian mythology. But there are many changes here, chief among which is the fact that characters from both those series co-exist somehow. All episodes on release date.

When: April 30
Where: Netflix

Court writer-director Chaitanya Tamhane returns with his second feature — executive produced by Oscar winner Alfonso Cuarón (Gravity) — that is also set in his native Mumbai and is the journey of the titular Indian classical music vocalist trainee (Aditya Modak) who is starting to question the years he has spent diligently following the traditions and discipline of the old masters (his guru and his father), as she struggles to achieve the excellence he's been striving for.

Watch the New Trailer for The Disciple

The Mitchells vs. The Machines

When: April 30
Where: Netflix

In a bid to reconnect (the movie was called “Connected” at one point) with his aspiring filmmaker and device-addicted daughter (Abbi Jacobson) who is leaving for college, a nature-loving father (Danny McBride) plans a cross-country road trip that turns into a lot more after the machines decide it's time to take over the world.

Justin Theroux leads this adaptation of his uncle Paul Theroux's 1981 novel of the same name — previously a 1986 movie with Harrison Ford — about an American family that has the bonkers idea of moving to the Latin American jungles to start a new life. Melissa George and Gabriel Bateman also star.

Neil Cross (Luther) is the creator and head writer on The Mosquito Coast. Rupert Wyatt (Rise of the Planet of the Apes) has directed the first two episodes. Two episodes on release date, and then one weekly thereafter for a total of seven episodes.

When: April 30
Where: Amazon Prime Video

Michael B. Jordan stars as US Navy SEAL officer John Clark in this Jack Ryan film spin-off who loses his pregnant wife in a Russia-sponsored attack on his home, and then sets out to uncover a conspiracy — with the help of fellow SEAL Karen Greer (Jodie Turner-Smith) and CIA officer Robert Ritter (Jamie Bell) — that threatens to engulf US and Russia in all-out war. It's adapted from a 1993 novel, so naturally it's full of Cold War paranoia.

Stefano Sollima (Sicario: Day of the Soldado) directs off a screenplay by Taylor Sheridan and Will Staples. Without Remorse, a Paramount Pictures movie, was meant for theatres but thanks to COVID-19, it was sold off to Amazon, also the home for the John Krasinski-led Jack Ryan series.