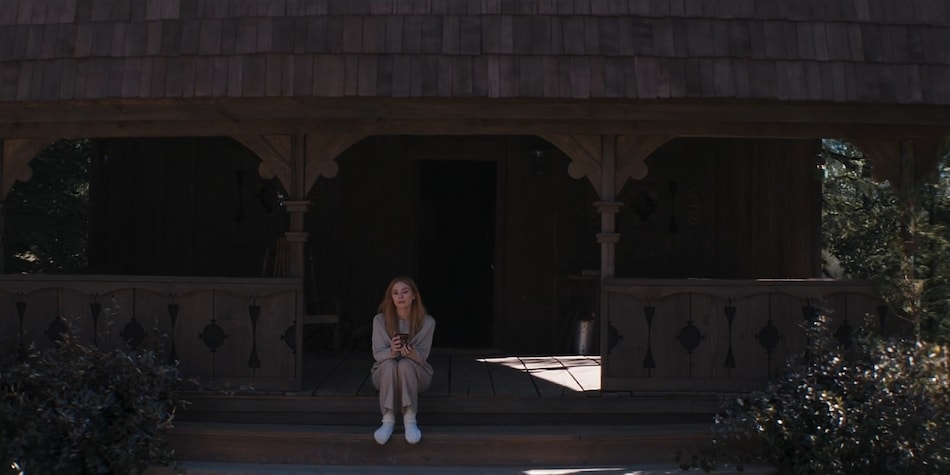 Spoilers ahead for WandaVision episode 9 “The Series Finale”.

The first scene during the WandaVision episode 9 credits appears after we get the title card. It picks up where we left off in the Westview town centre, with FBI Agent Jimmy Woo (Randall Park) coordinating the investigation now that Wanda Maximoff (Elizabeth Olsen) has departed the New Jersey town for good. He turns around to be greeted by Monica Rambeau (Teyonah Parris), suggesting this is only a little time after the end of WandaVision episode 9, when Wanda flew away as the police pulled in.

Woo wonders about Darcy Lewis' (Kat Dennings) whereabouts and is told by Monica that she thinks “debriefs are for the weak”. Monica then notes that they can thank Darcy for the arrest of SWORD's (acting) director Tyler Hayward (Josh Stamberg), who if you'll remember, slowly went full crazy — from monitoring Wanda, then resurrecting Vision as a weapon, and eventually firing at Wanda's kids in the WandaVision series finale. Darcy had hacked into Hayward's servers earlier in the season, so the evidence she collected has clearly helped bring him down.

Just then, a female FBI agent (Lori Livingston) shows up and tells Monica that they are looking for her in the theatre. Except there doesn't seem to be anyone actually waiting for her in the theatre. “I was sent by an old friend of your mother,” the female FBI agent says, as she reveals herself to be a member of the shapeshifting alien race Skrull — we first met them on Captain Marvel. Is she talking about Talos (Ben Mendelsohn)? I think so. The agent then adds that “he” would like to meet Monica, and when asked where, points up to suggest outer space.

This is naturally a set up for Captain Marvel 2. Parris is officially part of the cast, alongside Brie Larson as Carol Danvers / Captain Marvel, and Iman Vellani as Kamala Khan / Ms. Marvel who is set to get her own Disney+ series later in 2021. WandaVision episode 9's mid-credits scene suggests that Mendelsohn might be part of Captain Marvel 2 as well. We'll have to wait till November 2022 — that's when Captain Marvel 2 comes out — to discover where this leads.

The second WandaVision episode 9 post-credits scene is at the tail end of the credits, after the Dolby Vision and Panavision logos. We open in a mountain range somewhere, far off from any kind of civilisation. Pull in to a remote cabin in the middle of nowhere, with Wanda Maximoff (Elizabeth Olsen) dressed in plain clothes and sitting on the porch.

She turns around and heads in to refill her mug from the whistling kettle, but the camera moves past her and heads into another room. There, we are met with the Scarlet Witch (Olsen), who is floating in mid-air and poring through the Darkhold — that's the book Agatha mentioned during WandaVision episode 9. What's going on? Has she learned how to clone herself/ her mind?

But that's not all. The Scarlet Witch is then interrupted by the screams of her twin boys Tommy and Billy, who are pleading for help. Wait, they are still around? How does that work? The answer will likely come in Doctor Strange in the Multiverse of Madness, of which Olsen is officially a part of. This might seem ripe for a WandaVision season 2, but Marvel has already revealed that WandaVision would set up the Doctor Strange sequel — and that it has no plans for a season 2.

WandaVision episode 9 is now streaming on Disney+ and Disney+ Hotstar.