The story follows a small-time dance choreographer, who turns into a murder suspect when his abusive wife’s antics get too far. 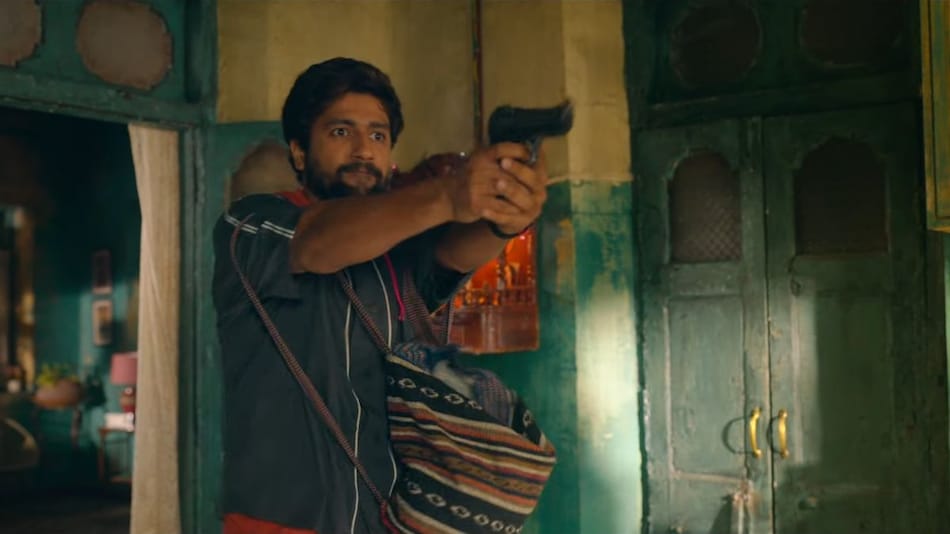 Vicky Kaushal in a still from Govinda Naam Mera

Vicky Kaushal-led Govinda Naam Mera trailer is out. Disney+ Hotstar dropped a musical trailer for the upcoming tale of a small-time dance choreographer, who turns into a murder suspect when his abusive wife's antics get too far. Shashank Khaitan, who rose to prominence with Humpty Sharma Ki Dulhania, writes and directs the film under Karan Johar's Dharma Productions banner. Oddly enough, the film was originally marketed as part of Amazon Prime Video's lineup in April and has now shifted hands to Disney+ Hotstar. Govinda Naam Mera is out December 16 on the platform.

The Govinda Naam Mera trailer opens with our titular character (Kaushal) dreaming of his co-worker/ girlfriend Suku (Kiara Advani), whom he hopes to spend his life with. That fantasy is soon broken, when his wife Gauri (Bhumi Pednekar) kicks him awake to attend to the ringing doorbell, treating him as a loser, of sorts. The already dysfunctional relationship is only worsened when Govinda is introduced to his wife's unnamed boyfriend, played by Viraj Ghelani (Little Things). Tired of the constant arguments and his hypocrisy when it comes to extramarital affairs, he begs Gauri for a divorce, only to be met with a clap-back response: “You want a divorce, right? Give me Rs. 2 crores and get what you want.” Turns out, Govinda is already deep in debt and on the verge of losing his house.

Midway through the Govinda Naam Mera trailer, our lead snaps and pulls out a gun, with the intent to kill. “Hey Manju, please don't scream,” she tells the panicking housekeeper. “He doesn't have the guts to shoot me.” While not explicitly shown, the trailer implies that Govinda was successful in his act, albeit not at the exact moment, causing the housekeeper to inform the local cops. Dayanand Shetty (C.I.D.) plays the senior officer, taking charge of the investigation, and locking up both Govinda and Suku, albeit he's been unable to locate the body. “Everyone knows about the murder, except for the police,” he speaks directly to the audience. “How sad.”

Production on Govinda Naam Mera began in March 2021, after Kaushal replaced Varun Dhawan (Bhediya) in the Karan Johar-produced film. Filming had to be halted for several weeks in April, when leads Kaushal and Pednekar tested positive for COVID-19. At the time, the film was reportedly titled Mr. Lele.