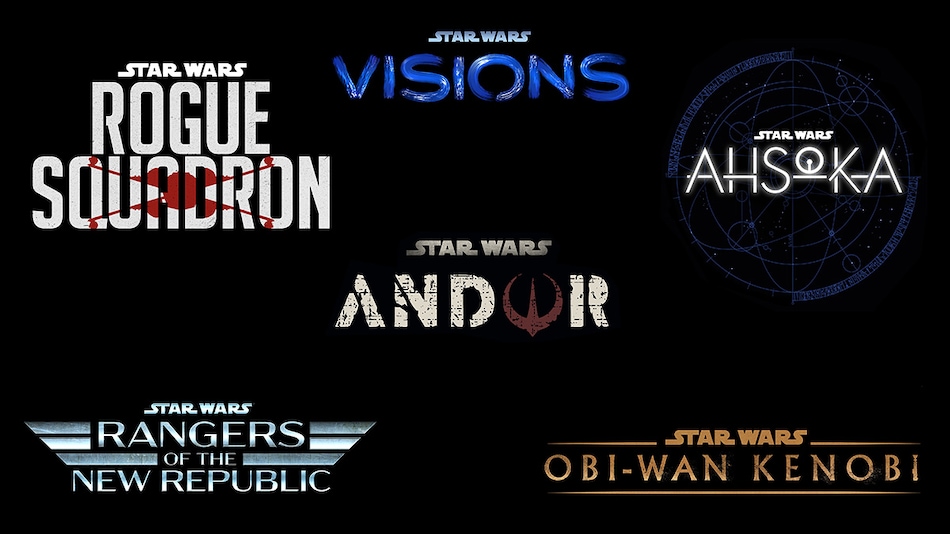 The next Star Wars movie is called Rogue Squadron. It will be directed by Patty Jenkins of Wonder Woman and will release in December 2023, Disney and Lucasfilm have announced. Alongside, Lucasfilm has revealed four new Star Wars series: Ahsoka, Lando, Rangers of the New Republic, and Star Wars: Visions; and an animated film: A Droid Story. Additionally, Hayden Christensen will return as Anakin Skywalker / Darth Vader on Obi-Wan Kenobi. Lastly, Andor is the title for the Rogue One prequel series, and Leslye Headland's female-centric mystery thriller is called The Acolyte.

Rogue Squadron will introduce a new generation of starfighter pilots as they earn their wings and risk their lives in a boundary-pushing, high-speed thrill-ride, and move the saga into a future era of the galaxy. It will be the next big-screen Star Wars adventure releasing on December 22, 2023. That means Taika Waititi's Star Wars movie, which Disney also confirmed, won't arrive before December 2025.

Ahsoka will naturally follow Ahsoka Tano, played by Rosario Dawson, who made her live-action debut in late November on The Mandalorian season 2. Dave Filoni will write Ahsoka, and executive produce alongside The Mandalorian creator and showrunner Jon Favreau.

Filoni and Favreau are also behind Rangers of the New Republic, another live-action series which is set within the timeline of The Mandalorian, that will intersect with future stories and culminate into a climactic story event. This sounds like a Marvel's The Defenders, and might bring in characters from all Star Wars series.

Lando is being developed by Justin Simien, creator of Netflix's Dear White People. Disney is calling it an event series. It will focus on Lando Calrissian no doubt. There's no mention of Donald Glover returning to reprise his role — he was originally seen in Solo: A Star Wars Story — though you'd expect that to happen.

Andor will also star Stellan Skarsgård, Adria Arjona, Fiona Shaw, Denise Gough, Kyle Soller, and Genevieve O'Reilly (as Mon Mothma), in addition to Diego Luna returning as Cassian Andor from Rogue One: A Star Wars Story. Tony Gilroy is behind Andor, which flies in 2022 on Disney+ and Disney+ Hotstar.

Obi-Wan Kenobi opens 10 years after Star Wars: Revenge of the Sith, with Ewan McGregor in the title role, and now being joined by Hayden Christensen as Anakin Skywalker / Darth Vader, whom he defeated in that culminating chapter but lost the bigger battle as his best-friend turned to the dark side. Deborah Chow, who helmed episodes of The Mandalorian season 1, is directing Obi-Wan Kenobi.

The Acolyte is a mystery-thriller that will take viewers into a galaxy of shadowy secrets and emerging dark-side powers in the final days of the High Republic era. It was originally revealed back in April as a female-centric Star Wars series that's set in a different timeline than all other shows. Leslye Headland, the co-creator and showrunner on Netflix's Russian Doll, is behind the idea.

Star Wars: Visions will be an anthology series of 10 animated short films from the world's best anime creators and leading Japanese anime studios, who will deliver “all-new, creative takes on the galaxy far, far away” and a “fresh and diverse cultural perspective”.

A Droid Story brings back R2-D2 and C-3PO for an animated adventure film that will introduce a new hero guided by the droid duo. Lucasfilm Animation will work with Lucasfilm's visual effects team, Industrial Light & Magic (ILM), on A Droid Story.