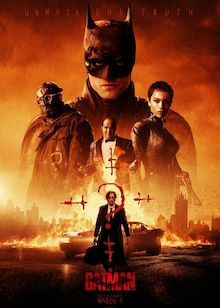 When a killer targets Gotham's elite with a series of sadistic machinations, a trail of cryptic clues sends the world's greatest detective on an investigation into the underworld, where he encounters such characters as Selina Kyle/ Catwoman (Zoë Kravitz), Oswald Cobblepot/ the Penguin (Colin Farrell), Carmine Falcone (John Turturro), and Edward Nashton/ the Riddler (Paul Dano).

As the evidence begins to lead closer to home and the scale of the perpetrator's plans becomes clear, Batman must forge new relationships, unmask the culprit, and bring justice to the abuse of power and corruption that has long plagued Gotham City.

Two sequels are in the works, as is a spin-off TV series for HBO Max.

The Batman — out Thursday in IMAX and Friday in all cinemas — is both a big-swing risk and the safest bet one could make in Hollywood. The latter because it's a movie about one of the most popular comic book characters of all time. So popular in fact that even an irresponsible movie about his archenemy grossed over a billion dollars at the box office a few years ago. The former because The Batman director and co-writer Matt Reeves, driven by Robert Pattinson's emo sulking Mr. Vengeance, has made a Batman movie grimmer than Zack Snyder's visions, much stranger than Christopher Nolan's trilogy, and so bleak that I was reminded more than once of the Batman: Arkham games and Frank Miller's graphic novels, “Batman: Year One” and “The Dark Knight Returns”.