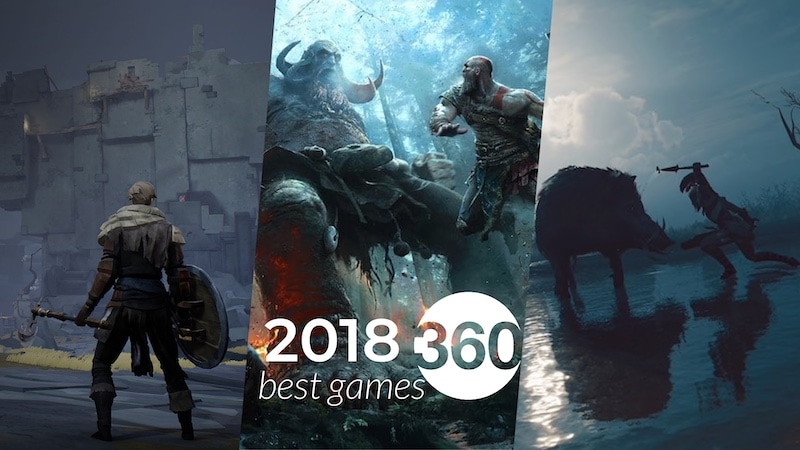 God of War, Spider-Man, and PUBG Mobile made the shortlist for the best PC game of 2018

Whether you play games on the PS4, Xbox One, PC, Nintendo Switch, or even on Android or iOS, 2018 was a fantastic year for gaming. From ultra-detailed big budget spectacles like Assassin's Creed Odyssey that cost Rs. 3,999 ($60 at launch) to exceptionally polished yet free battle royale titles like PUBG Mobile, 2018 has proved that video games are for everyone on every budget. Aside from a wealth of games on nearly every platform, the experiences on offer wildly differ too. Be it the satisfying moment to moment combat in God of War to the sheer lunacy of racing against trains and planes in Forza Horizon 4 or the simple joys of swinging from building to building in Spider-Man PS4, there's a lot to choose from, and we've done just that.

Thanks to its fantastic traversal and enjoyable story, Spider-Man on the PS4 is one of the rare current generation games where obtaining its platinum trophy — earmarked for completing everything it has to offer — an attainable affair. You simply want to explore every nook and cranny of Insomniac Games' rendition of New York due to how good swinging and leaping across rooftops feels.

It helps that you're never overburdened by a collection of pointless goals or tasks, as each side-quest filters back in to give you new powers, suits, and abilities. Granted it's not a new approach to game design, but its done in way that makes the game world feel ripe for exploration rather than an unwieldy to do list that most open-world games tend to be.

In an age where franchises like Call of Duty are forsaking single-player hijinks for multiplayer only affairs, clever open-world design makes Spider-Man on PS4 one of the rare single-player titles you want to finish and keep coming back to.

We weren't big fans of God of War protagonist Kratos' past outings. In them he was portrayed as a genocidal Greek warrior hellbent on killing every member of the Greek pantheon. God of War for the PS4 however, presents a mellower, stoic Kratos. He's not alone either.

Joined by his son Atreus, you'll travel across a mystical Norse world hiding secrets aplenty, regale in some of the most satisfying combat this side of Dark Souls, and experience an expertly crafted story that requires no understanding or knowledge of past God of War games. Fan boys may deride the lack of spectacle and its nuanced take on a well-loved protagonist may not be for everyone, but it's rare to see a reimagining to a series handled as deftly and with such polish and care.

Another year another Forza and that's not a bad thing at all. Forza Horizon 4 ditches the micro-transaction-fuelled malpractices that marred 2017's Forza 7. In its place are the ever-changing seasons of the UK, giving you weather changes that shape the game world and its tracks which in turn impact the cars you use from the compact Mini Cooper to the exotic Lamborghini Huracan in an attempt to progress through the game's many races and events to claim the ultimate prize — a golden wristband to indicate your accomplishments as one of the greatest racers around. Oh and being one of the best looking racing games in recent memory helps too.

Yakuza 6 is the final chapter of Yakuza protagonist Kiryu Kazuma long-running tale. And it delivers with a memorable cast, fantastic story, and of course, the series staple of bizarre mini-games. From creating your own army in the real-time strategy-inspired Clan Creator, to managing a cat cafe, you'll find plenty to do.

Although the biggest upgrade is in the game's technical performance. With this being Sega's first Yakuza game that's exclusive to the PS4, it looks better than any of the previous iterations of the series. Locations like Kamurocho at night, in particular, are a spectacle to behold and there are no loading screens when you enter or exit combat.

It's hard to believe that Tencent took the battle royale genre popularised by PUBG Corp with PUBG on PC and turned it into the spectacle it is in less than a year. But here we are. PUBG Mobile features console-like visuals, a suite of options to enhance performance, and of course a robust, responsive set of controls that make earning the coveted chicken dinner just a little bit easier.

Granted, it's not as colourful or inventive as Fortnite with its cartoony presentation and emphasis on building, but PUBG Mobile is playable on a wider range of smartphones ensuring that everyone can give it a go. If the game's popularity in India is any indication, it seems that everyone is.

Assassin's Creed Odyssey is what happens when Ubisoft had the bright idea to fuse gameplay elements from The Witcher 3 and Mass Effect with the company's prowess for detailed historical settings. You're a Spartan warrior in Ancient Greece and your actions shape the world around you and unlike other games, your choices aren't colour coded or signposted as good or bad options.

You'll see how they play out across the game as you maim, stab, and spartan kick your way across a 40-hour campaign and maybe even slay a minotaur or two along the way. Its gameplay and narrative come together in such a fashion that you wonder how the next game could improve upon it if at all.

The Monster Hunter franchise has been far from accessible until Monster Hunter World. It's as if Capcom was just waiting for the PS4 and Xbox One to roll out to bring in wholesale changes that made the series more approachable with Monster Hunter World. There's a sprawling open-world that feels organic compared to the small maps of past entries, modern day conveniences like easy online co-operative play, and hordes of different monsters to slay.

From the thunder-spewing Tobi-Kadachi to the highly dangerous T-Rex-like Anjanath, each foe in Monster Hunter World is almost always bigger than you and requires a different strategy to defeat, as each monster has specific weaknesses and attack patterns, making every encounter different from the last.

It may have '3' in the title but the events of Darksiders 3 take place in parallel to Darksiders and Darksiders 2. You're Fury, one of the Four Horsemen of the Apocalypse and you're tasked with slaying the Seven Deadly Sins that have made Earth their home. The journey is made interesting thanks to a protagonist that has more personality than the last two games put together complete with quips aplenty and an equally chatty side-kick.

There's agile combat to partake in with whips, magic, and the ability to slow down time as well. Coupled with a large, well-designed world to explore, all of it comes together fittingly to bring back a once dead franchise roaring back to life.

This Xbox One and Windows PC exclusive may wear its Dark Souls inspiration on its sleeve, right down to mimicking the control scheme of From Software's classic, but Ashen's tone is the biggest differentiator. Gone is the oppressive atmosphere that marks most Souls games and their clones. In its place is a theme of rejuvenation, what with you building a town as you explore Ashen's pastel-hued world.

The sense of dread that fills every character is replaced here by helpful AI-controlled allies that make your foes just a bit easier to kill, and the environments, while being dangerous have a lot more colour to them. These might seem like minor changes, but they're greater than the sum of their parts, making a game world you whose secrets you want to uncover until the wee hours of the morning.

All of this makes Ashen the most approachable and addictive expression of the Dark Souls formula of tough but fair combat and minimal story-telling.

It's filled to brim with easter eggs for fans of franchises like Mega Man, Final Fantasy, and Metal Gear Solid to collect in the form of spirits that augment your stats, making each battle easier than the next. World of Light also lets you unlock its massive roster with ease too. The game's many fighters are ridiculously fun to control and the with the promise of more on the way, this is one fighting game we'll be playing well into 2019.

What were your favourite games of 2018? Let us know via the comments.

Xiaomi Mi Play Rumoured to Be Bundled With 10GB of Free Mobile Data a Month for a Year
Steam Winter Sale Kicks Off, Includes Discounts on Yakuza 0, Assassin's Creed Odyssey, and More