You play as Ryas, a former Shadow Carja Warrior, who is recruited on a dangerous mission to investigate a threat in the Sundom. 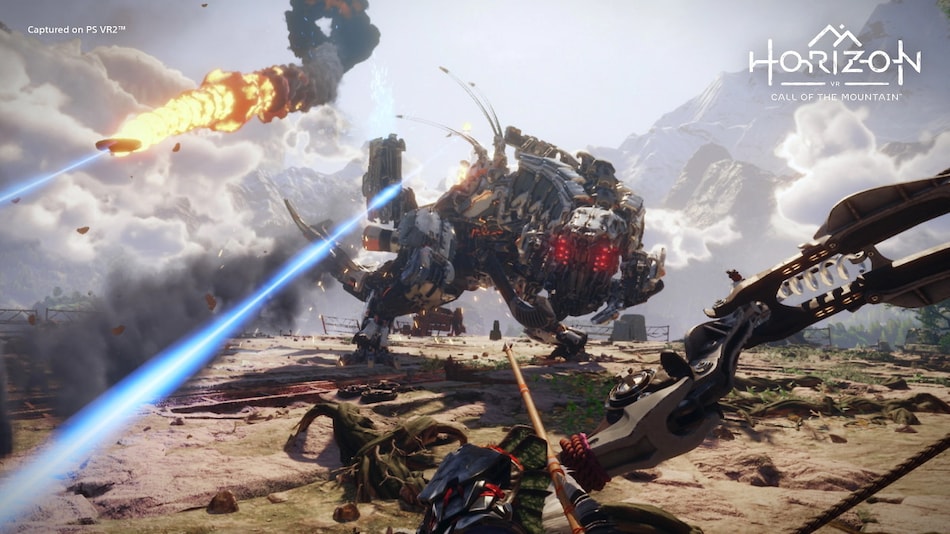 Obviously, the VR spin-off game for Horizon is set to first-person perspective

Horizon Call of the Mountain will launch alongside the PlayStation VR2 on February 22, 2023. Guerilla Games dropped an announcement trailer for the title, in which you play as Ryas, a former Shadow Carja warrior, who is recruited on a dangerous mission to investigate a new threat in the Sundom. Pre-orders are now up on the PlayStation Store, costing $59.99/ Rs. 4,999, further noting that it's a single-player experience. That said, buying a Horizon Call of the Mountain PS VR2 bundle is the cheaper option here, which costs $599.99 (about Rs. 49,000). The VR headset by itself costs a hefty $549.99 (about Rs. 45,000), so you can save a few bucks by avoiding the standalone game.

The Horizon Call of the Mountain trailer focuses on the gameplay aspect, continuing from where we left off during its initial CES 2022 presentation. Our character Ryas is being escorted to the central part of the map in exchange for freedom — something to do with a “difficult past.” Using the skillset at his disposal, which includes archery and a penchant for climbing, players must topple down gigantic beat-like machines, and uncover a new threat looming in the Sundom. We never get to see the PS VR2 live, in action, but the footage offers a glimpse at the acts one could perform in the first-party PlayStation title, which includes swimming levels, ziplining across valleys, and the tightening of the bowstring as you draw an arrow. Sony previously confirmed that the orb-shaped PS VR2 Sense controllers will include adaptive triggers, so the rigidity can be felt.

During our time in the game, Guerilla Games promises that we'll encounter both new and familiar characters from the Horizon universe, including Aloy the huntress, who will aid us in quests. The studio's blog post also notes that weaponry isn't limited to the default ones, as players would come across several tools that'll need to be mastered in their pursuit of survival in the wild. Horizon Call of the Mountain is being developed in collaboration with Firesprite, who previously worked on the survival horror game The Persistence, for the original PlayStation VR.

PlayStation has also made seven other PS VR2 titles available for pre-order in its store. The first six of them launch alongside Horizon Call of the Mountain on February 22, 2023, while The Walking Dead: Saints & Sinners - Chapter 2: Retribution drops March 21, 2023.

Here's the list of PS VR2 titles available for pre-order with their respective prices:

During its initial launch phase, only those in the US, UK, France, Germany, Belgium, Netherlands, and Luxembourg will be able to pre-order PlayStation VR2 through the online storefront at direct.playstation.com. Interested players can register for pre-orders today, with the first shipments going out during the launch week.

Both Horizon Call of the Mountain and the PS VR2 will launch on February 22, 2023. Currently, there is no word on an India launch.

Intel Hit With $949 Million Verdict in US Trial Over Violation of VLSI Computer Chip Patent
Featured video of the day
iQoo 11 vs OnePlus 10T: The Battle of the Snapdragon Powerhouses