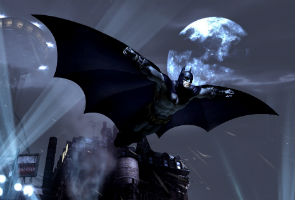 Highlights
In 2009, critics were blown away by a game that finally bucked the trend of bad superhero games. An obscure  studio called Rocksteady brought us the caped crusader in a way we had never imagined before in Batman Arkham Asylum.

Two years later, Rocksteady Studios has added a plethora of content to this anticipated sequel. The environment is five times larger and "open world" to traverse and virtually every Batman supervillain imaginable has been added to the mix. Is it enough to keep the Dark Knight rising? The story of Batman Arkham City is a follow up to 2009's Arkham Asylum. DC comics have released a comic book linking the events of both the games for the loyalist fans to read.

Without spoiling anything, Mayor Sharp has closed off one section of Gotham City quarantining it with prison. As expected, things don't go according to plan and the caped crusader is on hand to save the day.

Hugo Strange sets the mastermind plot but the story brings in all the antagonists from the Batman universe. Expect to encounter quite a few of them in the main story including Mr. Freeze, the Joker, Penguin and Two Face to name a few. And that's seriously just naming a few.

There are a whole lot of villains who aren't a part of the main story but their subplots are so cleverly intertwined with the game flow that you will subconsciously drift into these side missions leaving the main quest at bay. Two noteworthy side missions include tracing the sinister Zsasz to his hideout and the other, fighting alongside Bane and destroying the Titan Virus. There are many of these missions throughout the story and you can come back to the side quests even after completing all the main story missions. The Riddler is back in a much more sinister avatar and has hidden riddles, puzzles and collectables all over Arkham City. Randomly appearing taunts from the Riddler are incentive enough to switch on Batman's "Detective Mode" and go hunting for the "Riddler Trophies"

Overall, the story is very well packaged and presents a sense of urgency no matter what mission you undertake. All the aspects are very well layered too, just like a Christopher Nolan film. The ending however is a mixed bag. Some may be awed by the outcome of Protocol 10 (Protocol 10 is something Hugo Strange keeps announcing throughout the game) and its implications, others may feel that it was all too rushed.

For those who purchase the game new, get the Catwoman DLC (Downloadable Content) for free. There are four story missions that you can play as Catwoman and all these missions are intertwined with the caped crusader's tale. If you thought Arkham Asylum nailed the controls and combat mechanics of the game, then get ready to be blown away by Arkham City. The best part of the controls is that it will appeal to amateur gamers and pros alike. The overall gameplay is divided into two parts: platforming and traversing, and combat.

Platforming and traversing: Newcomers to the franchise may feel that the Dark Knight is stiff in his movements but spend some time with the controls and you will be amazed at how natural it begins to feel. Since Arkham City is an open world game, and Rocksteady claims that the environment is five times bigger than Arkham Asylum, Brucie boy has some new tricks up his sleeve in terms of traversing and navigating the environments. It is possible for you to glide from one end of the city to the other without touching the ground. These gliding mechanics are very intuitive and fun to maneuver so much so that it will put every Superman game to shame.

Batman also has his trusty arsenal of gadgets that are not only useful in combat but navigation as well. You can use the grapple hook to reach remote locations and cornered off places, use freeze bombs to create platforms to walk on, use the batarang to reach unreachable switches, so on and so gadgety.

The elements of platforming and traversing mixed with gadgets keeps the gameplay elements fresh through and through. Combat:  Combat in Arkham City is AWESOME! We'll repeat that - AWESOME! It is also so simple that we handed the controller to anon-gaming friend and he managed to get the Dark Knight to perform some spectacular moves.

The controls are simple for amateurs. Press the attack button to attack (Duh!) and the counter button to counter (double duh!). But that's not where it ends. You can use your array of gadgets to spice up the mix quite a bit. Cornered by too many heavily armed enemies? Just throw a smoke bomb, use the freeze bomb to momentarily freeze enemies, the batarang to stun them, grapple hook to pull enemies closer, so on and so forth. The sheer number of permutations and combinations in combat is so varied that you will be compelled to try new tricks with the billionaire superhero's gadgets. Did we mention you can now take down three enemies with a single counter? Yes, you can! These are some of the most satisfying moves to be incorporated in an action game. Add to the mix the fact that you can use the environment for stealth takedowns, glide to take down enemies and use destructible objects in the environment as well and you have a game that will keep you coming back for more. Catwoman has her own set of moves and gadgets. Sure, they aren't as varied and dynamic as the Dark Knight's but they are a lot of fun to use nonetheless. The controls for the feline predator's moves remain the same as Batman with the variation being in the takedown animation and gadgets at her disposal.

Catwoman feels a lot more agile as a playable character. She too has her own set of Riddler trophies scattered all around Arkham City so there is additional incentive to play as the Catwoman.

Last but not least, all of Batman's gear is upgradable from his armored suit to the simple batarang. You earn experience points that help you upgrade your arsenals capabilities. The environment is dynamic, representing themes borrowed from the animated series, the comic books and even some dark themes from the Chris Nolan movies. You could just prop yourself on the highest tower and admire the scenery and beauty of the world created by Rocksteady.

The character animations look stunning as well. From all the supervillains to the thugs running free in the city, all of them look great. The way the Batman's cape flutters at his heel when he runs to the combat animation and even the gliding mechanics, all look incredible.

The only flaw with the graphics we noticed was that the lip-syncing was a bit off at points and a few characters weren't very well animated.

The dark and gritty look of the city along with the theme-based areas over run by the supervillains adds some variation and unique life to each environment you visit.

But most commendable of all is the animation of the caped crusader himself. As the story progresses, Batman's suit and cape begin to tear and wounds are distinctly visible on the Dark Knights body as he takes a hit. There is an orchestral soundtrack humming in the backdrop of the game that changes in intensity depending on the situation you are in. There is a fast thump in the music every time you are presented with a sense of urgency, and a melodramatic tune plays out every time you have limited time to complete a task.

But that isn't the real highlight of the game. It's the voice acting that steals the show completely. The legendary Kevin Conroy dons the role of the lead protagonist and Luke Skywalker a.k.a. Mark Hamill lends his voice as the Joker bringing back nostalgic memories from our childhood Cartoon Network days. The infamous Nolan North lends his voice as the Penguin and the Black Mask. Danny Jacobs does a fantastic job as the vindictive Victor Zsasz.  The voice acting in the game is superb and the shrill laugh of the Joker still send shivers down our collective spine.

As you glide throughout Arkham City, you will pick up the chatter of the local thugs and there are points where you cant help but sit up on a high ledge and listen to the progressing chatter. The surprising element - the chatter is very relevant to the story progression point at which you are at the given point in time.

Add to the mix the thuds and whacks of Batman breaking bones and you have a game that is worthy of one of the best kick ass audio systems out there. Batman Arkham City is an awesome game. We finished the story in about 10 hours and invested another few in the side missions and the statistics say that we have onlyt finished 60% of the game. Add to that the plethora of challenge maps accessible for you trophy hungry gamers and the future DLC (Downloadable Content) of Robin and Night Wing as playable characters and you have a game that will give you many sleepless nights! Batman Arkham City is a must play whether you are a fan of the series or not.