An ambitious port that's a few steps away from past PlayStation-to-PC games. 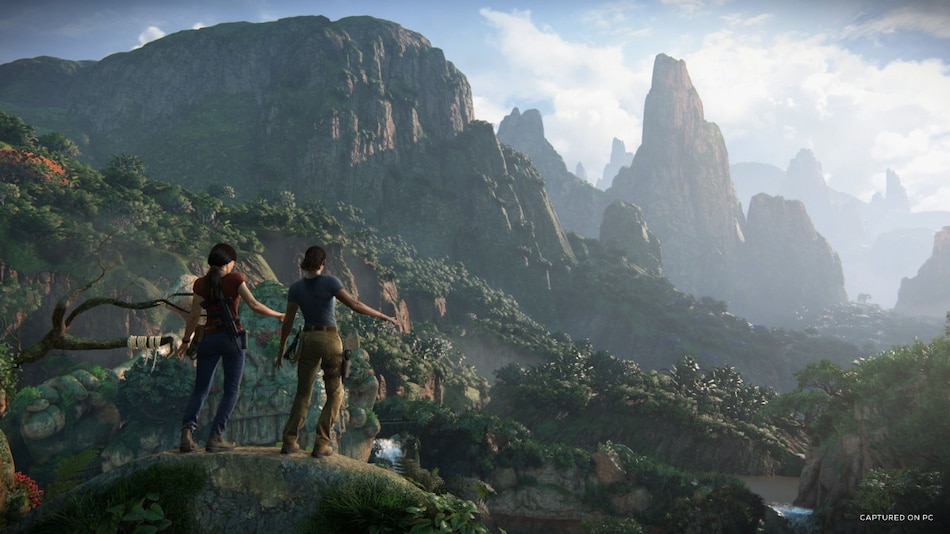 Uncharted: Legacy of Thieves Collection will be out on Steam and Epic Games Store

Uncharted: Legacy of Thieves Collection — out Wednesday on PC — is no doubt a potent brew of blockbuster storytelling and epic-scale thrills. Its arrival marks the first time PC players get to experience this globe-trotting adventure franchise since its founding nearly 15 years ago, as it has been PlayStation exclusive starting with the PS3. This version expectedly comes with added enhancements, which are foreign to even the recent PS5 remaster. Seeing Iron Galaxy Studios at the helm of Uncharted: Legacy of Thieves Collection, I had been erring on the side of caution, as these are the same folks behind Batman: Arkham Knight's terrible PC port. Now, to be fair, that was outsourced to a small team of 12, under heavy time constraints — grounds for all kinds of technical issues. Even so, I kept my fingers crossed and dove into Uncharted PC with a sliver of hope. Here's my full review.

As was the case with the PS5 remaster, Uncharted: Legacy of Thieves Collection is essentially a refined version of Naughty Dog's latest treasure-hunting games. It's a charming crate that holds together 2016's Uncharted 4 and its subsequent spin-off title, Uncharted: The Lost Legacy, letting a new generation of players experience Nathan Drake and Chloe Frazer's adventures in the wild.

Let's talk about distribution first — my primary point of concern. Iron Galaxy took the literal definition of “collection,” and bundled both games into a single application. This amounts to an 89.6GB download for Uncharted: Legacy of Thieves Collection, which after extraction and installation, takes up 124GB of drive space. Even if you lack interest in one of the titles, you'd still be forced to dedicate that massive space to both of them.

The Uncharted: Legacy of Thieves Collection homescreen lets you switch between Uncharted 4 and Uncharted: The Lost Legacy at will. However, it's a bizarre process. Attempting to do so triggers a forced restart, making you sit through a loading screen before you can get into the actual game. As evidenced by the install folder, it's clearly jumping between two different .exe files. This begs the question, why aren't they offered separately? “Convenience” isn't the answer, as it takes the same amount of time to manually launch a different game anyway.

First-time setup for Uncharted: Legacy of Thieves Collection can feel like a chore, especially on lower-end PC builds, owing to a "shader building" process (according to a message on screen). This could take anywhere from 15 to 20 minutes for each game, depending on your specs — in turn, affecting Steam's two-hour refund policy. Sure, you can still play the game while this happens in the background, but it would be far from an optimal experience, with flickering screens, lag, and maybe even a hard crash. So, it's recommended that you wait it out.

Uncharted 4 is clearly the more optimised out of the two
Photo Credit: Naughty Dog

I wouldn't be the first to suggest that the Uncharted series has lost its lustre over time, with predictable plot beats, corny dialogue, and dated mechanics. Don't let that distract you from the bigger picture though, which still manages to be an absolute blast to play through. Be it parkouring along wet scaffoldings, disassembling a clock tower, or gunning down foes in that cinematic chase sequence in Madagascar, the Uncharted: Legacy of Thieves Collection screams unbridled mayhem.

The keyboard and mouse control scheme, which is super responsive, benefits mildly from the game's accessibility features. While not as intricate as the PS4 and PS5's The Last of Us Part II, you get basic aids such as lock-on aim, a persistent centre dot, and mono audio, aimed at those suffering from unilateral hearing loss. Hand-to-hand combat segments in Uncharted: Legacy of Thieves Collection require some button-mashing — my sworn enemy — building up tendon pain in my wrist and palm. Luckily, I could just configure the ‘Hold' action, making the ordeal near effortless.

Core gameplay remains the same, with grappling hooks to swing around, puzzles to solve, and driving segments, all of which are slightly expanded in The Lost Legacy. Tiptoeing along narrow beams requires some precision, but you can continue making far-off, physics-defying leaps with ease. I was hoping for some minor conveniences such as ammo auto-pickup, which would streamline the run-and-gun experience, but unfortunately, all changes are limited to the technical side.

In keeping with past PlayStation-to-PC ports, Uncharted: Legacy of Thieves Collection prioritises character models above all else, and what better setting than the snow-capped vistas of Scotland, bursting with vibrant vegetation and ancient pirate ruins. Heading into Chapter 8, I was worried about how the ‘Low' graphics preset would affect inscriptions, a vital type of clue in the quest for Henry Avery's gravestone. As it turns out, Uncharted: Legacy of Thieves Collection makes an exception for objects that characters interact with, akin to 2D animation, adding an extra level of detailing that sets these apart from other assets.

For example, angular objects such as doors and vehicles have blurry decals, and text is prone to jagged edges. However, humans remain pristine, with sweat-glossed foreheads, realistic skin texture, and attire that collects dust and grime over time. When thrown into the same cutscenes in Uncharted: Legacy of Thieves Collection, there's a jarring effect, as the subject and background textures do not match. And honestly, that might be the only blatantly obvious downside to playing at the lowest settings. Unlike Marvel's Spider-Man Remastered on PC, there isn't much to fiddle around with in the graphics menu. Fine-tuning shadows, reflections, and ambient occlusion do add that oomph, but it's not significant to gameplay — at least not at full-HD 1080p.

Spider-Man Remastered PC Review: A Tad Overpriced, but Worth the Wait

Compared to their original PS4 builds, both Uncharted games look breathtaking. Hightailing across the sandy terrains of Madagascar feels hypnotic, as the scorching heat drenches you in growing streaks of sweat. That allure is amplified by the rugged, real-time dirt tracks you leave behind, packs of lemurs scurrying about, and locals cowering in fear as you steamroll past them. The Lost Legacy's PC port ups the ante for visuals, populating the screen with denizens bartering in the bazaar, exotic flora, and gigantic moss-covered idols and shrines to scale. It's insane how good Uncharted: Legacy of Thieves Collection looks — it made me want to invest in an ultra-wide monitor.

The ‘Medium' quality preset in Uncharted: Legacy of Thieves Collection adds lighting effects, making streams and puddles shimmer when trudging along. Human reflections were fairly solid on the marble floor of the Italian Rossi Estate, but those on water bodies were inconsistent.

At the ‘High' preset, minute details such as ridges and cracks are defined, adding undeniable stress to your GPU. This helps distract from the blurry, pixelated mess that plagues rocky surfaces you latch onto, in addition to separating foliage and flower beds, for even more realism. I didn't bother much with the ‘Ultra' preset on Uncharted: Legacy of Thieves Collection, as my graphics card was maxing out on memory.

While not fully on par with past PlayStation–PC ports, Uncharted: Legacy of Thieves Collection is decently optimised. My test rig consisted of an AMD Ryzen 5 2400G 3.6GHz processor, an Nvidia GeForce GTX 1660 Super GPU with 6GB of VRAM, 16GB of RAM, and a 500GB SSD. With this configuration, I was able to hit a sweet spot at Medium–High settings, resulting in stunning graphics. The experience was nearly smooth, but frame rates in this game can be quite erratic — at times, situational, depending on what chapter you're on.

At these settings, Uncharted 4 ran at 65fps on average, with frequent dips to 51, depending on scenery changes and camera movement. This remained true for both gunplay and exploration segments, with highs of 73fps reserved for select cinematics and closed-room events. When jostling through the Madagascar market or the auction setting earlier in Uncharted: Legacy of Thieves Collection, the frame rate plummeted to 32fps, before settling somewhere in the 40s. That drop was very noticeable, even at the Low preset, sometimes even causing the audio to cut out for a split second.

The adrenaline-fueled Madagascar chase sequence is undeniably the finest zone to push Uncharted: Legacy of Thieves Collection to its limits. It's not enough that you're thrown onto a large-scale playing field, with a tank right behind you. But then you've also got mercenaries, explosions, gunfire, mud flying off tires, destruction, and ongoing environmental changes to account for. At the aforementioned settings, the game managed to chug out 44fps on average, with the highest peak being 55fps. Bursting down a stairway filled with stalls, vendors, and brightly coloured umbrellas, triggered massive stutters, dropping the frame rate to 28fps at one point. The camera shaking does help with immersion, but some lag spikes are unavoidable.

At the time of writing, Uncharted: The Lost Legacy feels slightly rough in comparison, though that is somewhat justifiable. A decent chunk of the gameplay here involves traversing through wilderness. This generated an average of 50fps, with sharp declines to 32fps during intense sequences. On the other hand, puzzle sequences, wall climbing, and cutscenes saw numbers maxing out at 63fps.

The Lost Legacy's Chapter 2 pits Chloe Frazer and Nadine Ross in a high-stakes platforming run, as they're shot at by mercenaries in heavy rainfall. In addition to strong reflections on wet surfaces, you're faced with sparking bullet streams and environmental destruction. This sequence pushed out 46fps on average, and a quick brawl against enemies ran at 28fps. Having motion blur on helped avoid screen tearing, which I would recommend since Sony never goes overboard with it — there's no nauseating effect.

Bear in mind that both aforementioned chase sequences will cause significant lag spikes at certain intervals, if your hardware is in the same ballpark as mine, no matter which quality preset you choose.

Through gorgeous imagery and robust level design, Uncharted: Legacy of Thieves Collection promises a delectable adventure for newcomers to the franchise. Sure, the launch timing makes it seem like compensation — a playful jab — for PC gamers not being able to play God of War Ragnarök at launch, but Sony is not interested in matching Microsoft's day-and-date release strategy. For the Rs. 3,299/ $50 price tag, you practically receive one and a half games here — a splendid offer, if you can overlook its original last-gen release window.

Its shortcomings are exposed in Uncharted: The Lost Legacy, which lacks a bit of polish. And while support for ultra-wide displays and native 4K 60fps appear mouthwatering, I'm not sure that will be enough to draw in those who have already experienced these games on PS4 or PS5 for a second helping.

Uncharted: Legacy of Thieves Collection is priced at Rs. 3,299 on Steam and Epic Games Store.