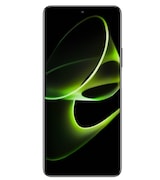 The Honor X40 GT runs Magic UI 6.1 is based on Android 12 and packs 256GB of inbuilt storage. It was launched in Magic Night Black, Racing Black, and Titanium Empty Silver colours.

Connectivity options on the Honor X40 GT include Wi-Fi, GPS, NFC, and USB Type-C. Sensors on the phone include fingerprint sensor.

Honor Magic Vs
OR