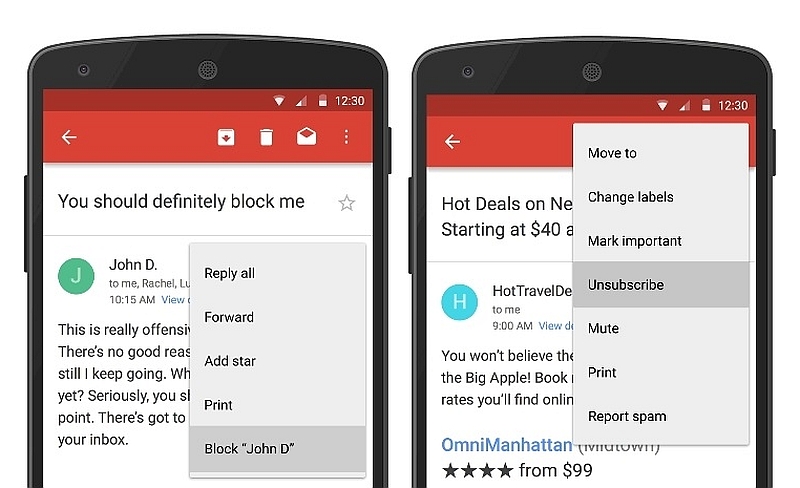 Google on Tuesday introduced two much-needed features to its Gmail service that would now let users block email IDs and unsubscribe from newsletters with a few clicks.

As a part of the latest Gmail update, people using Gmail on the Web would now be able to block specific email addresses in Gmail just with couple of clicks. Once blocked, all the mails from the particular ID would directly reach the spam folder instead of Inbox. Users also have to option to unblock the particular email ID from Gmail settings. The Block option, in case you are wondering, is visible inside the three-dot menu button on the top-right corner of the screen when viewing the email.

Google has also clarified that blocking an email ID that would send all future mails by the sender to the Spam folder; and it is different from the 'Report Spam' feature people used until now.

"Blocking a sender will result in having all future messages from a specific email address be moved directly to spam. It does not hurt the reputation of that sender. 'Report spam', however, provides feedback to Gmail on the nature of the email and helps it improve its classification overall," clarified Google to Venture Beat in a statement.

The 'Block' feature has already reached the Gmail Web version and would be hitting the Android app "over the next week." However, few regions including India have already started receiving the feature in the Gmail app.

Unsubscribing is now also possible for users via the Gmail app. It is worth noting that Google already brought the feature to Gmail's Web interface last year. Using this feature people can opt out from certain mailing lists directly from the Gmail app without visiting the particular website and unsubscribing manually. The 'Unsubscribe' option can be seen inside the three-dot menu button on the top-right corner of the screen on the navigation bar when an email is opened. The updated app is available to download from Google Play.