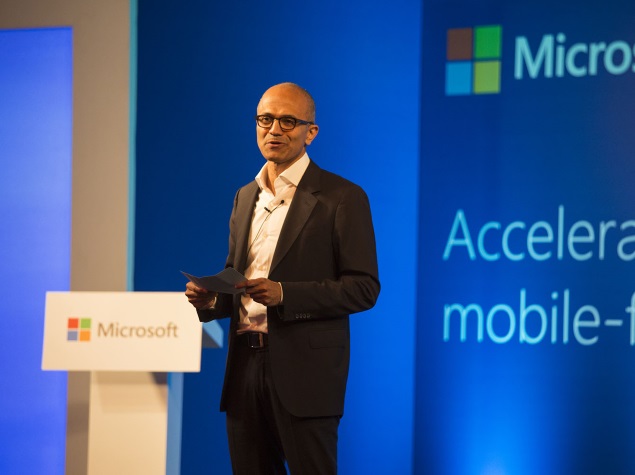 Microsoft announced plans Tuesday to offer its commercial cloud services from Indian data centres as it seeks to tap what it calls a $2-trillion (Rs. 1,000 lakh crore approximately) market in the country where Internet use is growing rapidly.

The move is part of the US tech giant's strategy to prepare for a world in which all data is stored online in locked accounts as it attempts to keep its market edge, with desktop use declining.

Microsoft chief executive Satya Nadella said the company would set up data centres in three Indian cities by the end of 2015, describing the country's demand for cloud services as "incredible".

"Last year, our cloud business in India grew over by 100 percent," said Nadella, on his first trip to India after taking the top job at the company in February.

"Buoyed by that success, we have now decided to offer cloud services from local data centres," he told reporters.

Microsoft, the world's biggest software maker, is facing stiff competition for cloud customers from US giants Google and Amazon.

The Microsoft chief kept mum about the amount of money that the firm will invest in India, but said "when we get started you will see the scale".

India's Internet use is booming as more of its 1.25-billion population buy smartphones, tablets and computers. Companies are also doing more computing in data centres.

Nadella said his company would offer its Azure and Office 365 cloud services from the new data centres.

"With more than 250 million Indians using Internet-connected devices today, there is an incredible demand and opportunity for India with Microsoft cloud services," he said.

While Microsoft has seen its computer desktop business reduces, it sees its software as giving it market clout and the cloud has become a new revenue growth driver.

Nadella's announcement came on the same day as the company said it intends to give an indication of "what's next" for its Windows operating system at a US event.