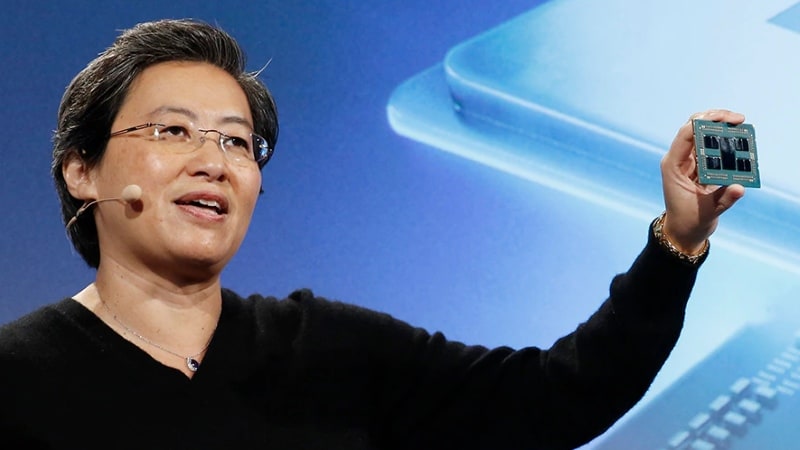 Two years after AMD first unveiled the brand new Zen CPU architecture that would catapult it back into the high-performance PC and server CPU markets, the company has revealed details of the next-generation Zen 2 architecture that will succeed it. With a focus on Epyc chips for servers, AMD now hopes to surpass the performance of its competitor Intel rather than just match it. New processors based on Zen 2 will use a 7nm manufacturing process and start hitting the market in 2019. Although exact dates and product specifications have not yet been revealed, AMD is hoping to achieve “double-digit growth” with this generation of products, according to CEO Lisa Su.

At an event in San Francisco titled Next Horizon, Su and other senior company executives and engineers laid out AMD's plan to make a serious dent in the high-margin server CPU market which is typically slow to adopt new technology. Building on the success of first-gen ‘Naples' Epyc CPUs, AMD will introduce the second generation, codenamed ‘Rome', in 2019. The chips will be manufactured by TSMC on its leading 7nm node, which the company says will give it a significant advantage over Intel, which is currently struggling with its own 10nm process.

Rome CPUs will have up to 64 cores using a new modular “chiplet” style of architecture rather than the core complexes used by first-gen Zen CPUs. The chiplets will contain nothing but CPU cores, and will be linked via the company's Infinity Fabric interconnect to an on-package 14nm I/O die. AMD says this will greatly help with uniform memory access latency, which was potentially a bottleneck when data had to hop from one core complex to another. Rome will support eight DDR4 memory channels and 128 lanes of PCIe 4.0 connectivity. Rome CPUs will also be socket-compatible with existing Naples server motherboards.

AMD claims a doubling of throughput and support for processing 256-bit floating point instructions, as well as better branch prediction and much better power efficiency. Security is also improved, with full support for data encryption as it passes from CPU to memory. Performance gains in terms of instructions per clock will be improved as well. The company is also claiming a potential 45 percent reduction in total cost of ownership for an Epyc-based server rather than comparable Intel hardware.

7nm Rome CPUs are currently sampling to AMD's customers and clients. AMD also teased that Zen 3 is on track for 2020 and will use a refined 7nm manufacturing process while maintaining forward socket compatibility to help customers migrate. Zen 4 is also in development, but there is no further news on that yet. In a floating-point-intensive ray tracing demonstration of a single 64-core Rome CPU prototype running alongside a dual-socket Intel Xeon Platinum 8180M server, the new AMD chip was seen to beat its competitor.

AMD also announced that Amazon has adopted Epyc servers for some of its EC2 (Elastic Compute Cloud) offerings. Customers can choose an AMD Epyc instance with up to 96 virtual CPUs and up to 768GB of RAM. This is already available in several Amazon EC2 territories in the USA, Europe, and Asia Pacific, with more coming soon. According to AMD, the AMD instances can significantly reduce running costs for customers.  Cray also announced an upcoming Shasta supercomputer built around AMD Epyc CPUs, capable of running at 100 Petaflops.

Along with developments on the CPU side, AMD also showed off its first shipping 7nm GPUs, in the form of the new Radeon Instinct MI50 and MI60 accelerators for the datacentre market, aimed at machine learning, rendering, and cloud computing applications. They can be used for faster neural network training, thanks to the claimed ‘ultra-fast' floating point performance and second-gen 3D stacked HBM2 memory. The new accelerators will also support high-speed PCIe 4.0 connectivity with twice the bandwidth of current PCIe 3.0 systems, as well as AMD's Infinity Fabric Link interconnect for up to 6x faster direct GPU-to-GPU communication.

How Overwatch Heroes are Born: Reddit, Data, and You
Qualcomm Must License Technology to Rivals, US Court Rules