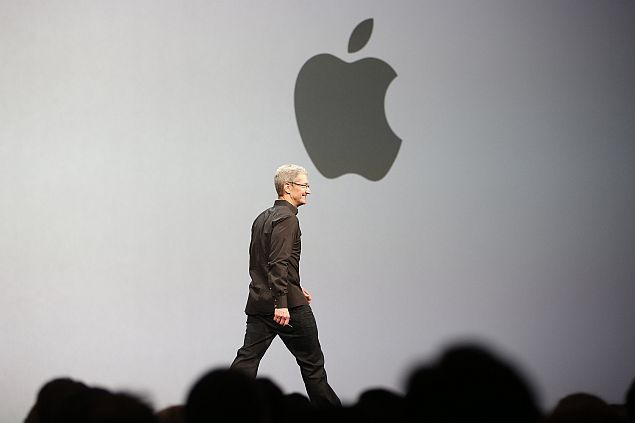 Apple Inc showed off a new line of Mac computers on Monday, including a sleek, cylindrical-shaped Mac Pro due later this year that will be assembled in the United States.

Executives showed off the computer as Apple kicked off its annual conference for its developers, where it is also expected to unveil a new streaming-music service.

Marketing chief Phil Schiller offered the audience a sneak peek at Apple's upcoming new Mac Pro - its top-of-the-line computer with a sleek cylindrical chassis that he said will feature several times the processing and memory speed and power of the previous generation.

It will be released later this year and will be assembled in the United States, Schiller said.

Apple's stock has fallen 37 percent after touching a high of $705 in September as competition in the key smartphone market escalated. Some investors believe the company that invented the iPhone is struggling to come up with original new products after cofounder and former CEO Steve Jobs died in 2011.

"Can't innovate any more, my ass," Schiller said as he showed off the new Mac Pro. "This is a machine unlike anything we've ever made."

Apple also announced a new operating system for the Mac PC called "Mavericks," moving away from its penchant for naming its computer software after big cats. The new OS can handle multiple display and "tagging" of documents, among other new features.

In an unusual move, Apple also shared the stage with little-known startup Anki, which was given the opportunity to show off a game.

He told the audience of developers at the Moscone Center in San Francisco that Apple's App Store now has 900,000 apps, which have been downloaded a total of 50 billion times.

The conference, whose tickets sold out in just over a minute when it opened up in April, comes as South Korean rival Samsung Electronics Co Ltd has solidified its lead in the smartphone market with a 33 percent share followed by Apple with 18 percent during the first quarter, according to market research firm IDC.

Cook is under pressure to show that the company that created the smartphone and tablet markets is not slowing down as deep-pocketed competitors such as Samsung and Google Inc encroach on its share.

Investor concerns center around whether Apple will be able to come up with more groundbreaking products as smartphone and tablet market gets more crowded.

In April, Apple reported its first quarterly profit decline in over a decade.

iOS 7 and other Apple launches in pics
Comments