Carvey is a 3D Carving Machine for the Designer in You 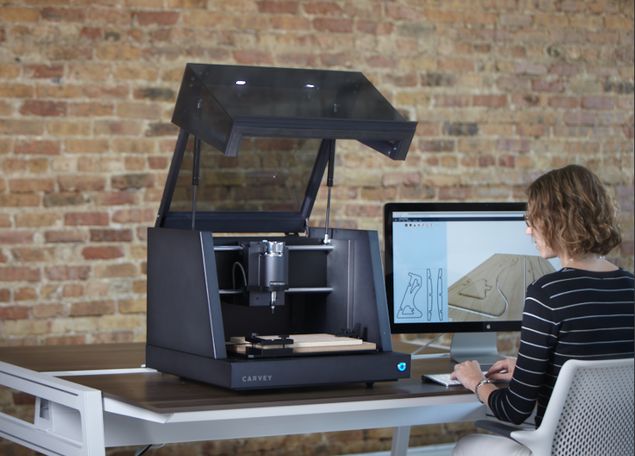 In our weekly series on crowdfunded projects, we look at some of the coolest new ideas that you can back on sites like Kickstarter and Indiegogo. That's because many interesting new products, like the Oculus Rift virtual reality headset and the Pebble smartwatch have come from these sites instead of big companies.

This week, we were most interested in the Carvey, a 3D carving machine on Kickstarter. The project has raised nearly five times the asking amount of $50,000 in just a couple of days, and you too can back this project until November 20.

A 3D carving machine is sort of the opposite of a 3D printer, even though the results are pretty similar. While a 3D printer typically extrudes material and deposits it layer by layer, additively building up a 3 dimensional object, 3D carving works in the opposite direction - you take a block of material and then subtract the excess, cutting away until you reach the desired shape.

The Carvey can be used to make 3D shapes, but the free software that comes with it is used for only 2.5D - engraving and embossing. You can still create full 3D objects using the CAD software.

The Carvey is a little expensive - an early bird unit (a few are still left at the time of writing) will set you back by $1,999, plus $150 for shipping; otherwise, it will cost you $2,399 plus shipping. The company is going to start shipping units only a year from now so you'll have a long wait ahead of you if you choose to back this project.

You can watch the video below to see how the Carvey will work:

With the growing interest in the maker movement, it's easy to see why there would be a lot of interest in something like the Carvey. The 3D wastes more material than additive 3D printing, but it is more reliable, and the examples made from the prototypes show that the final quality is also much more polished. It works with a number of materials - hardwoods, softwoods, cork, plywood, soft metals, circuit boards, waxes, foams and linoleum. Of course, based on some of the questions we've been hearing about this project, we should add a disclaimer - do not get your hand caught inside the cutting device. Don't get your hand (or any other part of you) caught inside any high tech device - no matter what happens, this sort of thing always ends in tears.

Given the long timeframe and the high cost, this isn't a project that everyone should back, but it is a very interesting concept nonetheless and worth checking out.

From 2D to 3D: How Hollywood Gains an Extra Dimension in India
HP to Unveil Sprout Windows PC With Projector and 3D Scanner: Report