Chromebook models are developed by most brands including HP, Lenovo, Acer, Samsung, and Dell. 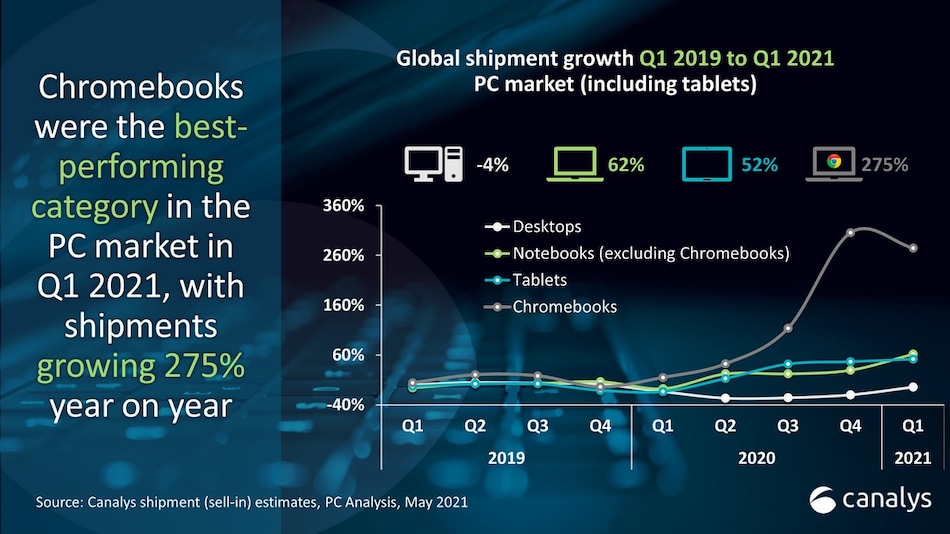 Chromebook showed the highest growth in shipments in the PC market globally in the first quarter of this year with 275 percent year-on-year (YoY) growth, as per a report. The latest data by market research firm Canalys shows that the PC market which includes desktops, Chromebooks, notebooks, and tablets saw significant growth in Q1 2021 with a total of 122.1 million units shipped. HP shipped the most Chromebook models at around 4.3 million units giving it the highest market share. Lenovo was second in the list, followed by Acer, Samsung, Dell, and other brands.

Chromebooks are laptops that run Chrome OS and are designed for regular light tasks like browsing the web, watching videos, creating and editing documents, etc. The first quarter of this year saw significant growth in Chromebook shipments globally with a 274.6 percent (approximately 275 percent) growth compared to the same quarter of last year, according to latest data by Canalys. There were 12 million Chromebook models shipped in the quarter. On the other hand, the notebook market grew as well with 62 percent YoY growth.

Tablet shipments of Chromebooks grew by 52 percent in the same quarter while desktop shipments declined by 4 percent. Overall, the PC market grew 53.1 percent YoY thanks to a total of 122.1 million unit shipments. This growth in Chromebooks, tablets, and laptop is from more and more people adjusting to the remote working scenario that has been imposed due to the pandemic.

Overall, Lenovo secured the highest market share (including all four facets of PC market) at 19.7 percent. Apple followed with its 18.1 percent, HP with its 15.8 percent, Dell with its 10.7 percent, and Samsung with its 8 percent.