Microsoft has also included several changes, improvements, and fixes with this preview build. 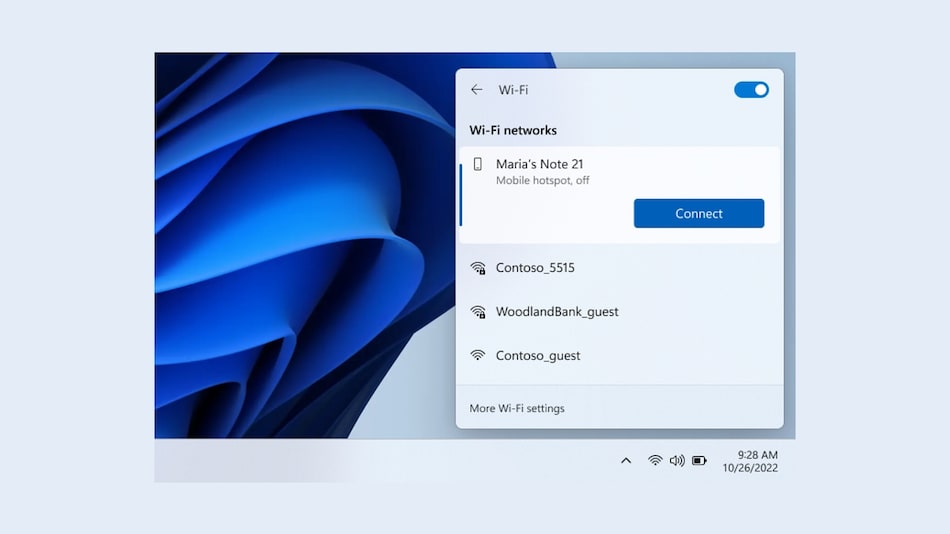 This feature is only compatible with Samsung Galaxy devices running on One UI 4.1.1 or higher

Microsoft announced on Thursday that is rolling out a new feature that will grant users instant access to their smartphone's hotspot via the Phone Link on PC. The instant hotspot feature is being released as part of the latest Windows 11 Insider Preview Build. It allows users to securely connect to their smartphone's Wi-Fi network without touching their phones. However, this feature is currently only compatible with select Samsung Galaxy devices. Furthermore, this update includes several other changes, improvements, and fixes as well.

The Windows 11 Insider Preview Build 25231 was released by Microsoft on Thursday. This update is currently only available to members of the Dev Channel of the Windows Insider Program. When a user's smartphone is in range of the system, it will automatically appear on the Wi-Fi network list.

From here, users will be able to single-click on the device's Wi-Fi link to enable and connect to its hotspot. It will not require the user to go through their smartphone's hotspot settings or type a password. However, users will need to have paired their smartphone and PC beforehand.

Users will first need to have Windows 11 version 22H2 Build 22621 or higher to install this preview build. The Phone Link desktop app will also have to be version 1.22082.111.0 or higher. Finally, users will be required to install the Windows Phone app version v1.22082.142.0 or greater on their Samsung device.

To use this new feature, users will need to have a Samsung Galaxy device running on One UI 4.1.1 or higher and a SIM card plan capable of supporting hotspot connectivity. Their PC will also be required to support both Wi-Fi and Bluetooth connectivity.

This Windows 11 Insider preview build also includes a tablet-optimized taskbar and System Tray improvements, which were previously available to only select users. An error that was causing apps like Paint and Windows Terminal to crash has also been fixed.