An eco-friendly laptop with decent performance for everyday use 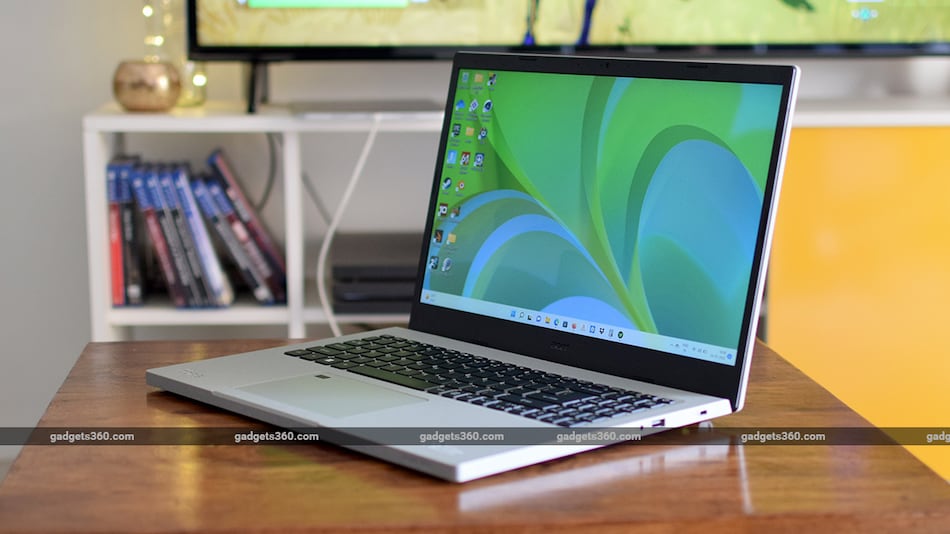 The Acer Aspire Vero starts at a market price of Rs. 57,999 in India

Tech companies have been trying various ways to reduce their carbon footprints over the past decade or so, whether it is using eco-friendly packaging and recycled metals in their products, or even powering their manufacturing and assembly lines with renewable energy. We've seen some drastic attempts to reduce e-waste in the smartphone segment, as many manufactures have stopped bundling accessories such as chargers with their products. Acer has recently pushed itself to produce “greener” devices, and the result is its new Vero line of laptops. The Acer Aspire Vero was the first laptop to be announced back in December 2021. This is what we'll be reviewing today, but the company has also recently expanded its Vero line to include more laptop models, mini PCs, a monitor, a wireless mouse, and some accessories.

The main appeal of the Vero line is that it uses Post-Consumer Recycled or PCR plastics for construction. In the case of the Aspire Vero, the entire chassis and the frame around the display are made from 30 percent PCR materials, which should make it more eco-friendly for recycling later on. Building materials aside, the Aspire Vero is in essence a mid-range laptop that's designed to handle casual productivity and multimedia tasks, and we'll be testing its capabilities in this review.

Acer launched the Aspire Vero at a starting MRP of Rs. 79,999 in India, but it's now available for a lot less. Acer's own online store listed two variants of the Aspire Vero at the time of this review. The variant with 8GB of RAM (which is what I'm testing) is priced at Rs. 57,999 and the one with 16GB of RAM is priced at Rs. 62,999. Apart from the difference in RAM, both variants have the same specifications which include an 11th Gen Intel Core i5 CPU and a 512GB SSD.

The look of the Acer Aspire Vero is definitely distinct from the rest of Acer's Aspire series. The base of the laptop has an interesting block-like design with no tapering edges whatsoever to offer any illusion of slimness. The lid and main chassis are a pale grey colour with a hexagonal texture and fine specs of yellow and grey. Acer says it has not used any paint over the chassis and this finish is the result of using PCR plastics. The laptop feels very rugged, with very little flex to the lid and the keyboard area. The Acer logo and all other labels on the laptop are embossed into the plastic, thereby avoiding any unwanted paint or stickers.

The Acer Aspire Vero has a good selection of physical ports. The right side has a single USB 2.0 Type-A port, Kensington lock slot, headphone and microphone combo socket, and two status LEDs. The left side of the laptop has the bulk of the ports, which include the charging socket, a Gigabit Ethernet port, HDMI, two USB 3.2 Type-A ports with power-off charging functionality on one of them, and a USB Type-C port. The latter cannot be used to charge the laptop. The Aspire Vero misses out on an SD card slot, which is disappointing.

The ventilation system in the Acer Aspire Vero seems pretty standard. There are plenty of inlet slits on the bottom of the chassis for air intake, which is then expelled via the opening between the two hinges. The Aspire Vero has bright yellow rubber feet on the bottom that provide a decent amount of elevation from whatever surface this laptop is placed on. The back of the lid also features some rubber padding as it pushes the base upwards at an angle when it's open.

The Acer Aspire Vero has a full-sized keyboard with black, chiclet-style keys and white backlighting. Acer says it has used 50 percent PCR plastics for the key caps. The keys in general are comfortable to use but I didn't like how the Up and Down direction keys are too small and don't have enough space between them. The Aspire Vero has a large palm rest and trackpad. The latter doesn't offer the most precise touch sensitivity but it gets the job done. There's even a fingerprint sensor in the upper left corner of the trackpad.

The Acer Aspire Vero has a 15.6-inch IPS LCD panel with a full-HD (1920x1080 pixels) resolution. Brightness and contrast levels seem adequate for indoor use and the matte finish of the display helps reduce reflections quite a bit. This laptop ships in a brown box that's claimed to be 100 percent recyclable. Acer makes it a point to state that even the included laptop bag is made of recycled plastic.

At the time of this review, the Acer Aspire Vero is only available with an 11th Gen Intel Core i5-1135G7 quad-core CPU in India. You get an integrated Intel GPU. As mentioned earlier, you can buy this laptop with either 8GB or 16GB of DDR4 RAM. Acer states that the RAM in the 8GB model is expandable up to 12GB. After opening the base of the laptop, which is a simple process as it's held in place with standard Philips screws, I noticed just a single accessible RAM slot, which had a Samsung 4GB DDR4-3200 (1600MHz) RAM stick in it that you can swap out. The other 4GB of RAM is soldered onto the motherboard, and so it is not user replaceable.

There's also a 512GB PCIe NVMe SSD, which is easily accessible. Even though it's easy to access these components, you will void the warranty if you attempt to open the laptop yourself, so I think it would be best to let an Acer service representative perform any upgrades you might want under warranty.

The Acer Aspire Vero has stereo speakers, a 720p webcam, and a 48WHr battery. Wireless connectivity includes Wi-Fi 6 and Bluetooth 5.1.

The Acer Aspire Vero offers easy access to its RAM and SSD, but opening up the base could void your warranty

My review unit was running Microsoft Windows 11 when I set it up. The Acer Aspire Vero also comes with a complimentary license for Microsoft Office 2021 Home and Student, which includes only Word, Excel, and PowerPoint. You also get a trial version of Norton Security Ultra and some first-party apps from Acer such as Care Centre and Pure Voice Console. Acer also bundles Cyberlink's PhotoDirector and PowerDirector editing apps with the Aspire Vero. There's a new battery management app called Vero Sense, which lets you choose between various battery profile presets and also lets you limit charging to 80 percent (vs 100 percent) to prolong the battery's lifespan.

For general productivity, the Acer Aspire Vero handled MS Office apps and browser-based tasks very well. Thanks to the SSD, Windows 11 was quick to boot up and apps were generally quick to load. The laptop was adept at multitasking too, and switching between running apps was quick and painless. The Aspire Vero ran cool when I wasn't stressing it and only got a little warm when charging or gaming. The latter activity did cause the exhaust fans to ramp up, which was then audible, but this never got distractingly loud.

Speaking of gaming, the Acer Aspire Vero can run casual games from platforms such as Steam, Epic Games or the Microsoft Store just fine, but heavier titles really struggled to run properly. For instance, Portal 2 and Lego Batman 3: Beyond Gotham ran smoothly at high graphics quality but Fortnite was not very playable even after lowering the graphics settings. The laptop fared well in synthetic benchmarks, considering its specifications. The Aspire Vero scored 3,972 points in PCMark 10 and 12,519 points in the 3DMark Night Raid graphics test. As for real-world tests, the Aspire Vero managed to compress a 3.24GB folder of assorted files in 3 minutes and 16 seconds, while transcoding a 1.3GB AVI file to H.265 took 1 minute and 17 seconds.

The display of the Acer Aspire Vero is sharp and bright, making it well suited for work and leisure viewing. It has relatively slim borders on the left and right, compared to the ones on the top and bottom. Streaming videos on YouTube and in apps such as Netflix looked good. The brightness was more than adequate and colours were well saturated with sufficient punch. The quality of video recorded by the webcam was decent, and even in dimly-lit situations, there wasn't too much noise in the footage. I found the keyboard quite comfortable to use even for extended typing sessions but the trackpad felt a little unresponsive at times when trying to perform quick multitouch gestures.

Acer claims that the Aspire Vero can last for up to 10 hours on a single charge but I found the actual number to be a lot lower. Even with conservative use, with the screen brightness set to less than 50 percent, when I was mostly using apps within a browser and watching videos, I would typically get about five hours of runtime before the power saver mode kicked in at the 20 percent battery level. Below the 15 percent battery level, the laptop switches to Vero+ battery mode which offers around 20 additional minutes of runtime before you need to charge it. All in all, you should expect close to six hours of runtime on one charge with light to medium usage, which is decent, but could have been better. I also ran Battery Eater Pro which is usually a good indicator of a laptop's actual battery life under heavy load, and this program ran for two hours before it exhausted the battery.

The Acer Aspire Vero is a mid-range laptop that performs well and has no real major flaws as such. It should appeal to environmentally-conscious buyers who are looking to reduce their carbon footprint. This laptop is sturdy and well-built, and offers decent performance, a good selection of ports, a bright display, and a comfortable keyboard. Battery life is also decent, although it could have been better. My only real issue with it is that it's a bit heavy which can be cumbersome if you plan to travel a lot with it.

The market price of Rs. 57,999 for the 8GB version is decent, although for a similar price, you can find options with equally competitive specs and Intel's 12th Gen CPUs, such as the Asus VivoBook 15.