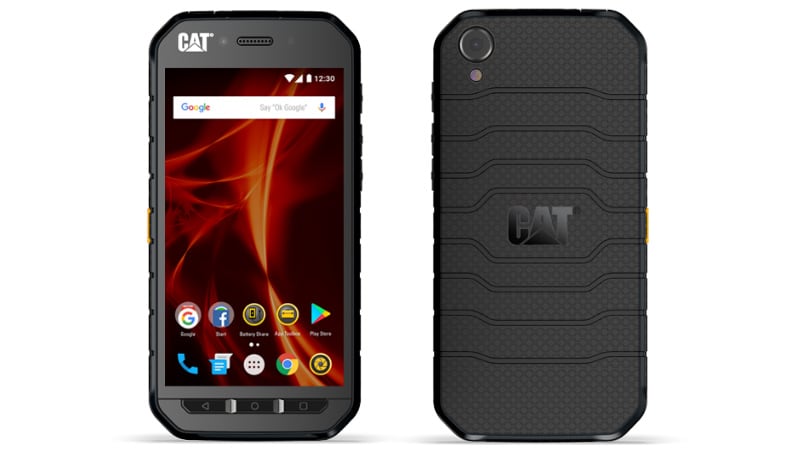 Cat, or Caterpillar, a brand licensed by Bullitt from the US-based construction machinery manufacturing company of the same, on Thursday launched new durable smartphones and a tablet at IFA 2017 in Berlin. Built by Bullitt, the Cat S41 and Cat S31 smartphones come with a rugged build, water resistance, drop/ vibration proofing, military grade protection, and large batteries. The Cat S31 is priced at GBP 299 (roughly Rs. 24,700), and the Cat S41 is priced at GBP 399 (roughly Rs. 32,900). The S41 is already available on the company's website, while the S31 will be made available sometime later this year. The company has also unveiled a Windows 10-based tablet called the Cat T20, and it is priced at GBP 599 (roughly Rs. 49,500). There are no availability details revealed for the tablet.

Both the smartphones run on Android Nougat, and support dual-SIM slots. The devices sport a unique design aesthetic with a rubber back to withstand drops and falls; and bent edges to help cushion the fall further.

Starting with the Cat S41, Bullit says the smartphone is 'beyond IP68 certified', surviving immersion in up to 2 metres of water for up to 1 hour, and is drop proof for up to 1.8 metres on concrete. It has passed the MIL-STD 810G certification as well, and supports category 4 vibration proofing. The Cat S41 sports the latest corning Gorilla Glass 5 scratch-resistance, and has a mammoth battery that comes with a battery sharing feature allowing you to juice up other devices as well.

The Cat S41 sports a 5-inch full-HD (1080x 1920 pixels) IPS display with auto switch support and wet finger and glove support as well. It is powered by a 2.3GHz MediaTek Helio P20 MT6757 octa-core processor paired with 3GB of RAM. Internal storage is offered at 32GB with expandable memory option via a microSD card slot (up to 2TB). It sports a 13-megapixel rear sensor with PDAF, and LED flash support. At the front, there is an 8-megapixel fixed focus camera as well.

It packs a 5000mAh battery that is rated to offer up to 38 hours of talk time (on 3G), and 44 days of standby time. It comes with the battery sharing feature that lets you charge other devices as well. Connectivity options include 4G LTE, FM radio, 3.5mm audio jack, Bluetooth 4.1, Wi-Fi 802.11 b/g/n, Micro-USB port with OTG support, and GPS/ A-GPS. The Cat S41 smartphone measures 152x75x12.85mm and it weighs 218 grams. On board sensors include accelerometer, ambient light sensor, digital compass, and proximity sensor.

The Cat S31 has a 4.7-inch HD (720x1280 pixels) display with wet finger and glove support and Gorilla Glass 3 protection. It comes with IP68 certification which means it can survive immersion in up to 1.2 metres of water for up to 35 minutes. The smartphone is drop proof up to 1.8 metres as well, and has also passed the MIL-STD 810G standard test. It is powered by a Qualcomm Snapdragon 210 quad-core SoC paired with 2GB of RAM. Internal storage is at 16GB, and it is further expandable via microSD card (up to 128GB).

In the camera department, the S31 sports an 8-megapixel autofocus camera with LED flash support and a 2-megapixel fixed focus camera in the front. It packs a 4000mAh battery, and offers the same connectivity options as the S41. The smartphone measures 146x74.42x12.6mm and weighs 200 grams. It features similar on board sensors.

Lastly, the company has launched the Cat T20 tablet which also sports a rugged aesthetic, apart from being vibration and drop (from a height of up to 1.8 metres) proof. It runs on Windows 10 and comes with IP67 certification (surviving immersion in up to 1 metre of water for up to 30 minutes). The tablet sports an 8-inch (800x1280 pixels) IPS LCD display with Gorilla Glass protection. The T20 tablet is powered by an 1.44GHz Intel Atom Z8350 quad-core processor paired with 2GB of RAM. It offers 64GB of internal storage as well.

WhatsApp Business Messaging Service Testing Begins in India, BookMyShow a Client
Apple Has Millions on iPhones. Can It Use That to Get You to Watch Its Shows?