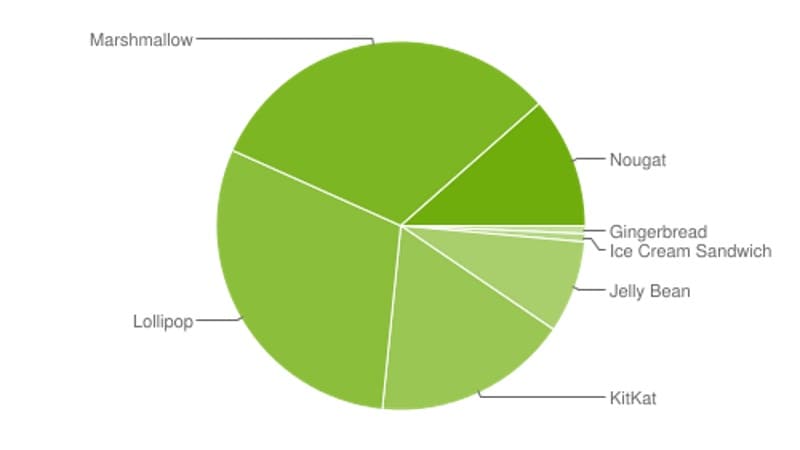 Just like every other month, Google has now released the updated version of its Android version distribution chart with data for the seven-day period ending July 6. Notably, this month's numbers show that Android Nougat is now gaining ground and has finally managed to cross the 10 percent mark for the first time since the search giant started rolling it out last year.

The updated numbers confirm that Android 7.0 Nougat is now present on 10.6 percent of devices while the Android 7.1 Nougat version is present on 0.9 percent of total Android devices that checked into Google Play, taking the overall percentage to 11.5 percent. To recall, just last month, this same number stood at 9.5 percent.

To note, the figures are gathered from devices visiting the Google Play app, which only supports Android 2.2 and above.

The latest distribution data shows that the Android 6.0 Marshmallow enjoys the largest share among all Android versions and is running on 31.8 percent of the total devices. The share has increased month-on-month by 0.6 percent from 31.2 percent in June.

The Google Play distribution data shows that Android Lollipop has a total share of 30.1 percent of active Android devices (with Android 5.0 Lollipop running on 7.8 percent of devices and Android 5.1 Lollipop at 22.3 percent) that checked into Google Play.

Android KitKat, which was running on 17.1 percent of devices last month, continues to have the same percentage share as last month on the updated chart. Android Jelly Bean has a combined share of 8.1 percent, while Android Ice Cream Sandwich (v4.0.3-4.0.4) and Android Gingerbread (v2.3.3-2.3.7), have a share of 0.7 percent each.

Google also updated its OpenGL version distribution numbers which has OpenGL 3.0 at 45.1 percent, and OpenGL version 2.0 steadily rising to 38.4 percent. OpenGL version 3.1 is now present on 16.5 percent of the devices.