Android 11 beta brings chat bubbles that allow you to respond to conversations without having to switch back and forth between apps. 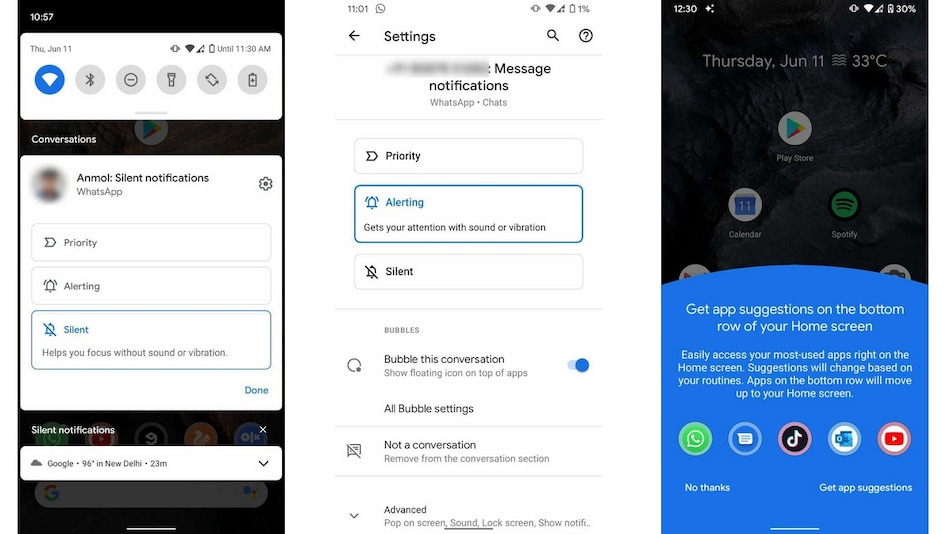 Android 11 beta is available to Pixel 2 and newer phones

Google has released Android 11 beta for Pixel phones after it cancelled the June 3 unveiling event due to the ongoing protests. After multiple developer previews for the upcoming update to Android, the OS has reached beta phase and brings a number of new features that Google has categorised into three groups: People, Controls, and Privacy. Android 11 beta brings chat bubbles, improved media controls, and improved control over sensitive permissions. Additionally, Google also released several new features in Android Studio 4.1 Beta and 4.2 Canary.

In its blog post, Google says it is making Android more “people-centric and expressive” so that it can recognise and prioritize certain conversations. The notifications in Android 11 beta are divided into three categories namely, conversations, alerting notifications, and silent notifications.

Android 11 beta also introduces chat bubbles similar to what we've previously seen with apps like Facebook Messenger. This bubble feature has now been integrated into the OS. Google says this is better for multi-tasking and keeping conversations in view. Essentially, these bubbles will help users respond to conversations without having to switch between the current app and the messaging app.

Android 11 beta adds improved and consolidated keyboard suggestions that offer “context-specific entities and strings” in the suggestion strip. This means users will get more relevant suggestions while typing. However, it is unclear whether this will be exclusive to Google's Gboard or work with third party keyboards as well. Google has also implemented an on-device visual cortex for improved voice access. It can understand what's on the screen and generate labels for better voice commands.

A new power button menu has been added in Android 11 beta that gives users the ability to access their connected devices more easily. The media controls will allow for quick switching between connected devices to manage audio and video output. This feature can be turned on from the developer options.

Google says it is added enhanced control over sensitive permissions with the Android 11 beta. Users will be able to give apps a one-time access to microphone, camera, or location and the app will request for access again when it is used the next time. All the runtime permissions that an app has been granted will be reset if that particular app has not been used for an extended period of time. Android 11 has 12 new updateable modules that will allow expedited updates for the core components of Android, as well as help in improving security, privacy, and consistency.

How to get Android 11 beta

Android 11 beta is available for the Pixel 2, Pixel 2 XL, Pixel 3, Pixel 3 XL, Pixel 3a, Pixel 3a XL, Pixel 4, and Pixel 4 XL. If you have an eligible Pixel phone, head on to the enrolment page and you should see you eligible devices that are associated with you Google account. After enrolling, you should get a notification within 24 hours on your phone for the update.

If not, you can check for in manually by going to Settings > System > Advanced > System Update, and tap on Check for update.

However, if you still don't see the update, head on to the download page to manually download and install Android 11 beta. There are two ways to do this, using the Android Flash Tool or manually flashing your Pixel phone, both of which have step-by-step instructions.