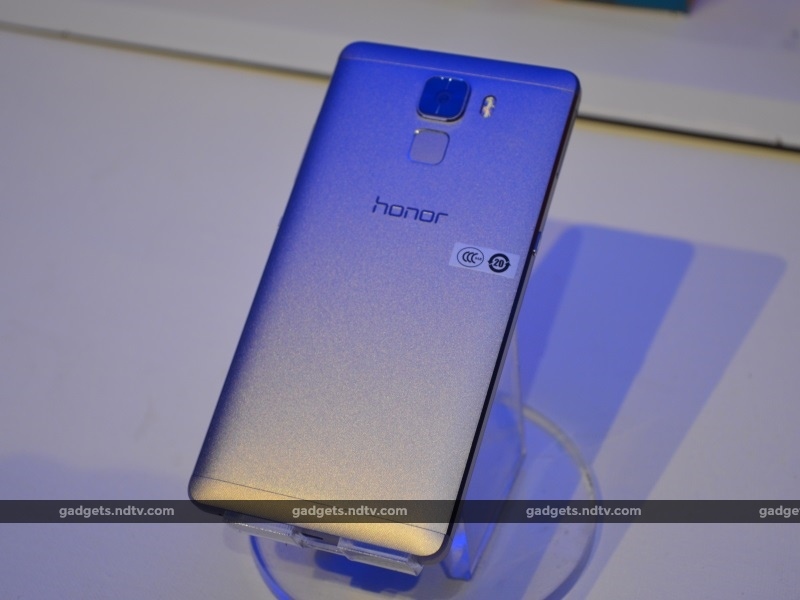 The Android 5.0 Lollipop-based Honor 7 features an aluminium alloy design and sports a 5.2-inch full-HD (1080x1920 pixel) display with a pixel density of 423ppi. The company says the Android 6.0 Marshmallow update for the smartphone will be rolled out in February 2016.

It comes powered by the company's own 64-bit octa-core Kirin 935 processor (four Cortex-A53 cores at 2.2GHz + four Cortex-A53 at 1.5GHz) clubbed with 3GB of RAM and ARM's Mali-T628 GPU. The smartphone runs EMUI 3.1 skinned on top of Android. The smartphone also comes with a microSD card slot, with expandability up to 128GB.

The Honor 7 ships with a 20-megapixel rear camera with phase detection autofocus which the company claims can deliver autofocus speeds of 0.1 seconds. The rear camera features a Sony IMX230 sensor, f/2.0 aperture, 6-lens module, dual-LED flash, and sapphire glass protection on top. An 8-megapixel front-facing 26-mm wide-angle fixed focus camera with a f/2.4 aperture is also on board the handset, alongside a front-facing flash module. Like the Huawei Ascend Mate 7, the Honor 7 also features a fingerprint sensor right below the rear camera that is claimed to read fingerprints in 0.5 seconds.

The smartphone's connectivity features include NFC, dual-band Wi-Fi 802.11a/b/g/n/ac, Bluetooth 4.1, GPS/ A-GPS, and 4G LTE. Measuring 143.2x71.9x8.5mm and weighing 157 grams, the Honor 7 is backed by a 3100mAh battery with a quick charging feature that charges the smartphone from zero to full within 1 hour 25 minutes, and zero to 50 percent in 30 minutes. The Honor 7 comes with a reverse charging feature that lets users charge other devices using the smartphone.

Also on board the Honor 7 is a smart hardware key that can be customised to open specific apps based on a single press, long press, or double press. The company is also touting a double-tap-for-screenshot feature for the UI, and app gifts worth up to Rs. 14,000 from partners like Freecharge, Hungama, and Yatra.