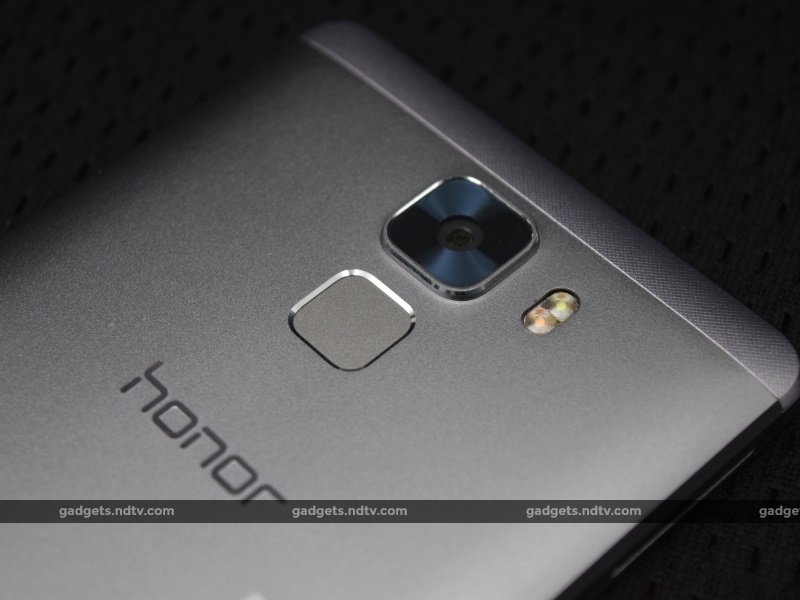 Although Honor is a Huawei-owned brand, its devices usually lack any mention of this, instead pitching the smartphones independently. The Honor brand allows the company to compete in the crowded budget market, and offer high-quality, well-specified devices at affordable prices without affecting the 'premium' brand image that Huawei has built for itself in China and the world over.

That is exactly what the new Honor 7 brings to the table. It's packed to the brim with features, and has top-spec hardware. With a specifications sheet that could put most flagship devices to shame, the Honor 7 hopes to win over a lot of high-value buyers with its Rs. 22,999 price tag. We go into the details in our review. 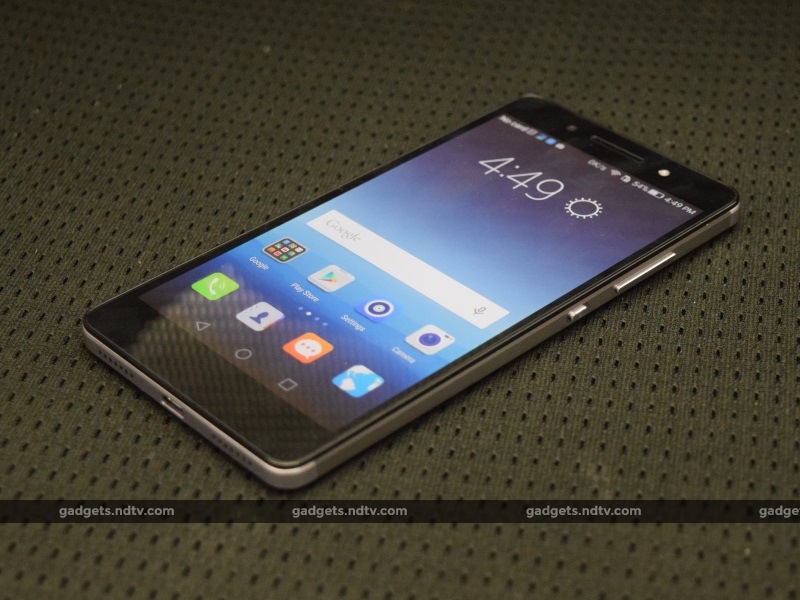 Look and feel
With a 5.2-inch full-HD IPS-LCD screen, the Honor 7 sits in the flagship smartphone sweet spot for displays. It's bright, detailed and suitably large, without breaching the 5.5-inch mark that is arguably considered to be the point where a phone becomes a phablet. The front is 72.4 percent screen, with on-screen soft keys, narrow borders and the front camera and flash on either side of the earpiece. The lack of branding makes the front stark and Spartan, a look we rather like.

The power and volume keys are on the right, while the USB port and speakers are at the bottom. The top of the Honor 7 has the 3.5mm socket and an IR blaster. The left of the device has the SIM and microSD tray, and the 'Smart' key. The version of the Honor 7 sold in India is a single-SIM device, however the tray is the same as the one used in the dual-SIM version which has a hybrid SIM slot. There are therefore markings and a distinct slot for a second SIM card, but be assured that a second SIM will not work, and only a correctly inserted microSD card will be recognised. 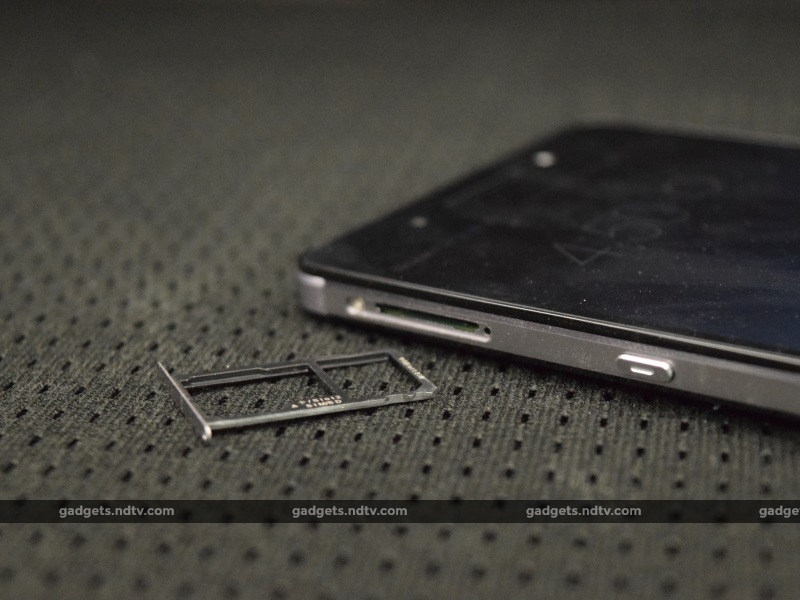 The Smart key is a rather unique addition to the device, and one that we hope more manufacturers start incorporating. This is a physical button that can be customised to trigger specific functions. The key can be set up to trigger up to three different functions with a single press, a double press, or a long press. There are four quick functions to choose from: ultra snapshot, voice recording, flashlight, or screenshot, or you can launch a specific app. It's an absolutely fantastic feature that makes the device much more intuitive and user-friendly.

The back of the Honor 7 is entirely metal and has a dull matte finish that looks great and is excellent for grip as well. Above the Honor logo at the top-centre are the primary camera, flash, and fingerprint sensor. The latter doesn't look like a sensor at all, with a metallic colour that blends in with the device. It's extremely effective at its job, and you can save up to five fingerprints which can be used to unlock the phone or access the file safe and app lock. It's also 360-degree capable, which means it will read a saved fingerprint no matter what angle your finger is placed on the sensor at.

The sensor can also be used for swipe functions, either pulling down the notification drawer/shortcut menu and clearing notifications, or bringing up the recent apps list. It can be used to unlock the device directly from sleep mode, without you having to first wake the device. It will take a little while to get used to its positioning at the back. The best way to go is to save prints of both of your index fingers, since these are the easiest to use the sensor with. 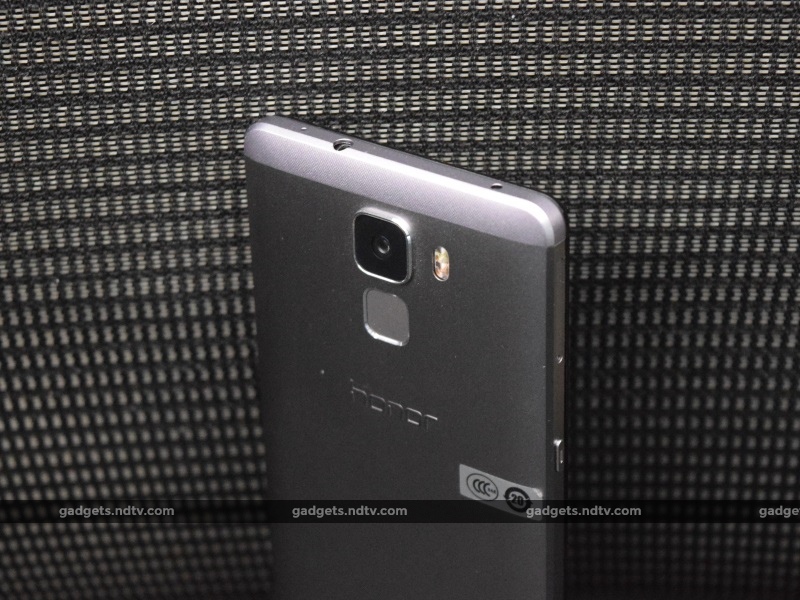 Specifications and software
Huawei is one of the few smartphone manufacturers that develops its own SoCs for its devices instead of using readymade ones from specialised developers such as Qualcomm or MediaTek. The octa-core Hisilicon Kirin 935 SoC finds its way into the Honor 7, with the primary four cores operating at 2.2GHz and the secondary four cores at 1.5GHz. The GPU is the ARM Mali-T624, which is admittedly an old unit and not one that we would normally see in a high-end device like this.

The rest of the specification list is comfortably flagship and high end, with 4G connectivity (Indian bands supported), 16GB of internal storage (expandable by up to 128GB with a microSD card), 3GB of RAM, Bluetooth 4.1, and a 3100mAh battery. About 9GB of the internal storage is user accessible, so you will likely need to utilise the microSD slot. 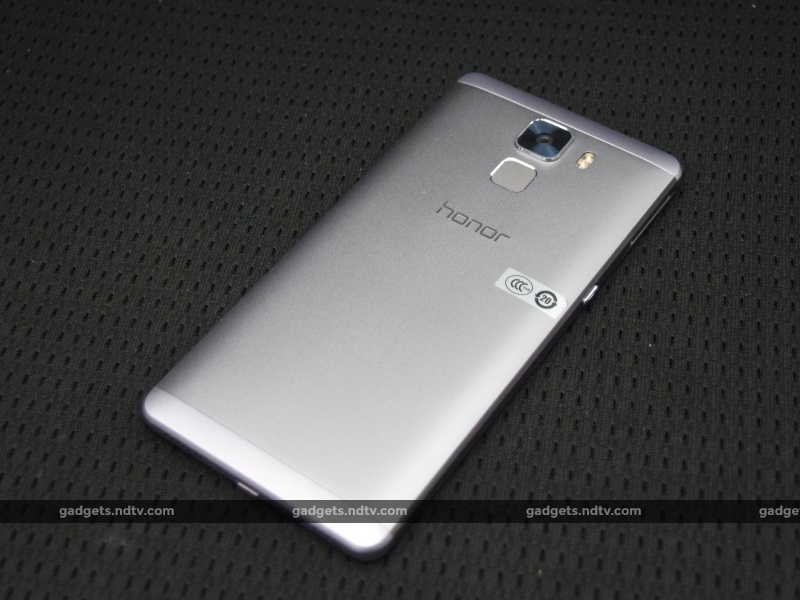 The Honor 7 runs on Android 5.0.2 with Huawei's Emotion UI 3.1 on top. The UI is single-layered, much like Xiaomi's MIUI and Gionee's Amigo UI, and therefore lacks an app drawer. We've made no secret of our dislike for single-layered UIs, as this stacks all app icons in an untidy manner, clutters all the homescreens, and makes the use of widgets a tricky affair. Fortunately, this is the only real flaw to the interface.

The rest of the system is highly customisable, with options for practically every function including the navigation bar, smart key, motion control, and one-handed operation. It's also comfortably smooth and easy to use, thanks to the excellent hardware under the hood. There are a handful of pre-installed apps, but none are too bothersome, and the majority can be uninstalled. The software feels truly high-end and flagship, and goes with the rest of the Honor 7. 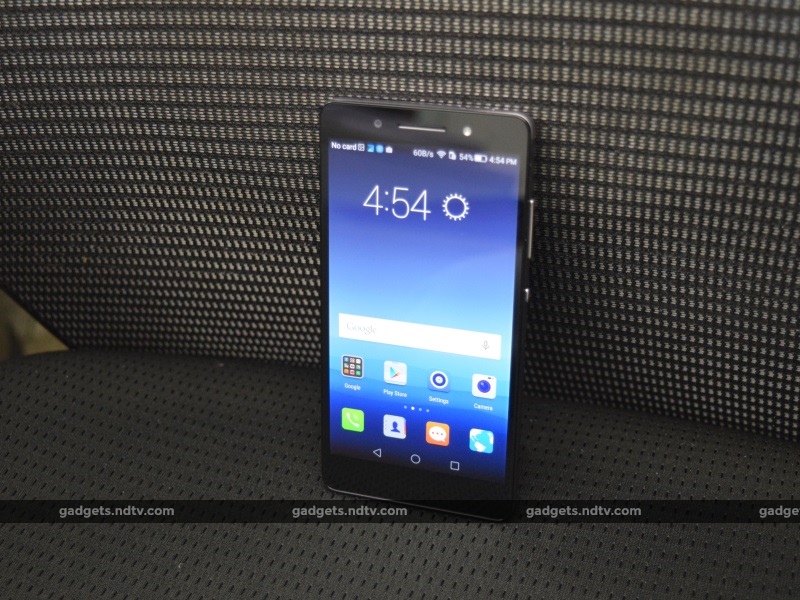 Camera
The Honor 7 has a 20-megapixel primary camera with dual-tone flash, and an 8-megapixel front camera with single-tone flash. Both cameras are capable of recording full-HD video, and the app has plenty of modes and filters that you can use.

The camera app is usually excellent, and has been designed to look good and be easy to use. The filter menu is quickly accessible, as are the mode selector and settings. There are plenty of software-based camera features to play with, giving the user a high amount of control over the kind of pictures taken. Apart from the typical panorama and HDR modes, there are also modes for slow-motion video, all-focus, audio note, time lapse, and best photo.

Within the settings you can trigger the timer, smile capture and object tracking, as well as adjust basic manual settings such as ISO and white balance. An ultra-snapshot mode allows you to quickly take shots even when the phone is locked  by double-tapping the volume down key or assigning the function to the smart key, although this doesn't always work well. The only notable flaw is the inability to quickly record video. You first have to switch to video mode and then tap the record button to start, which makes a two-step process out of a function that many phones can pull off in a single step. 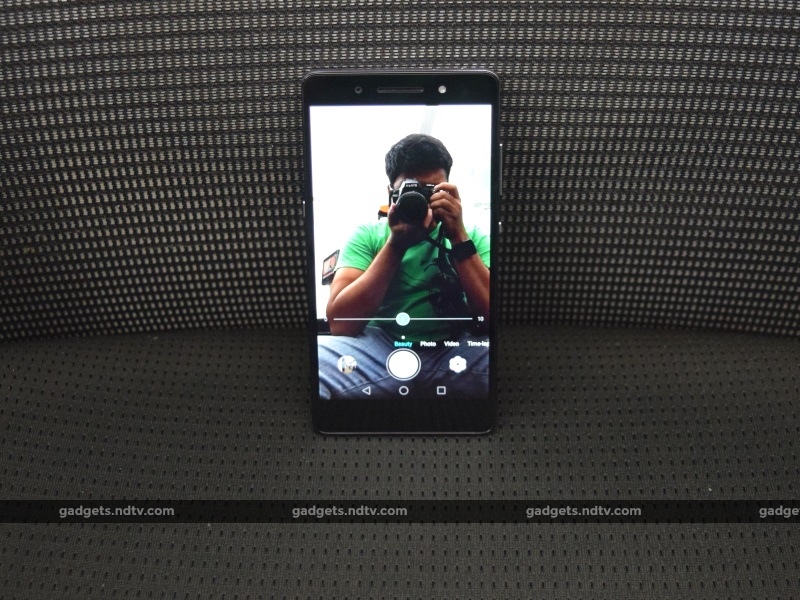 The camera itself is quite up to the mark, taking good shots in all conditions. The rear camera is capable of serious detail and good colour reproduction, be it with close-ups or more open pictures. The high resolution lets you zoom in deep without a loss of detail, and shots are vibrant and realistic. Close-up shots achieve a similar level of detail, as well as accurately replicating lighting conditions and shadows.

The front camera is absolutely brilliant for a smartphone, and thanks to the flash, is capable of taking some excellent selfies. The camera is in fact capable of taking better pictures and video than even the primary cameras of a lot of cheaper smartphones, and selfie lovers will have a lot to gain from the Honor 7. The software allows the front camera to also shoot in panorama, audio note and watermark modes, which might appeal to some people. 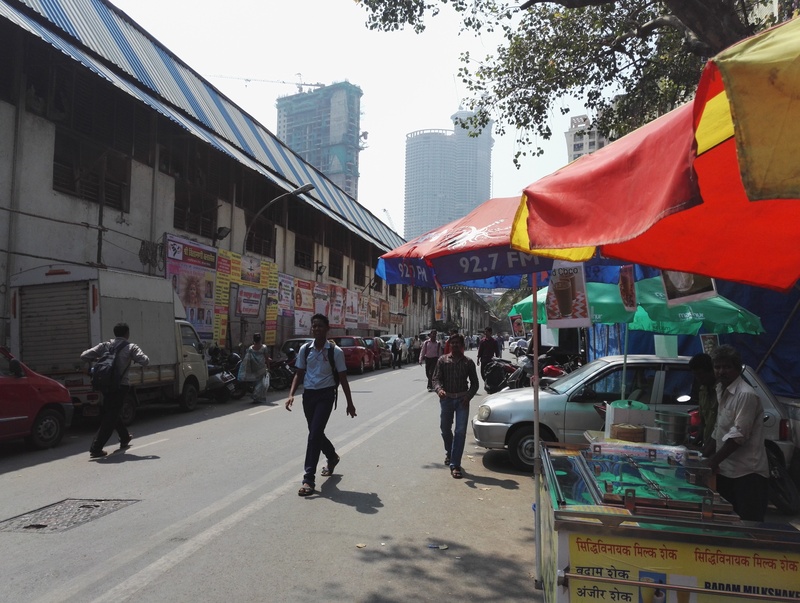 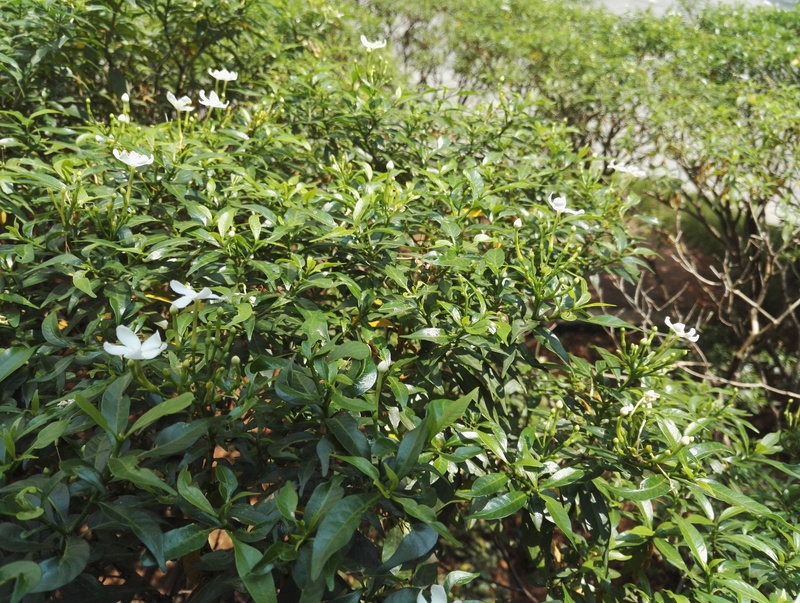 Performance
The Honor 7 utilises the company's own Hisilicon Kirin 935 SoC, coupled with 3GB of RAM. Until the development of the Kirin 940 and 950 is completed, this is the company's flagship SoC, and is also utilised by the Huawei P8Max and Mate S, apart from the Honor 7. The SoC is a vast improvement over the previous Kirin 930, and ensures that the Honor 7 performs well in all functions.

The device performed admirably in all our benchmark tests, with scores of 50,207 in AnTuTu and a solid 7,380 in 3D Mark Ice Storm Extreme. It ran our test videos well too, showing no lag or stutter even with the heavily encoded and high-resolution files. All the apps and games we ran performed flawlessly as well. 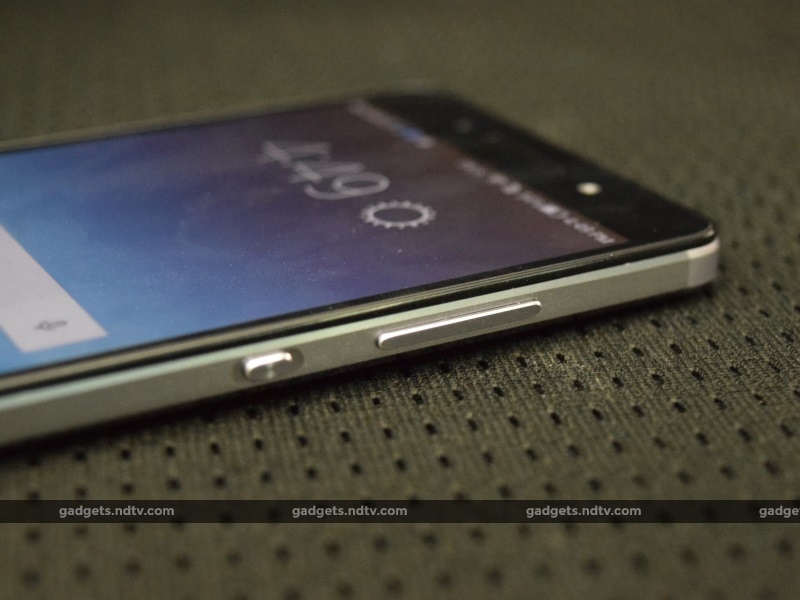 The Honor 7's aluminium alloy cover and L-Type architecture were designed to improve heat dissipation and keep the device cool through intense tasks, and this works effectively. Angry Birds 2 and Dead Trigger 2, which are both known to generate serious heat with test devices, failed to significantly heat the Honor 7 up beyond just a slight bit of warmth on the back.

Finally, battery life was a little below par, but certainly acceptable enough and adequate for a day's use under moderate conditions. The Honor 7 ran for 8 hours, 44 minutes in our video loop test, which is relatively low for a device with a 3100mAh battery. However, this may be forgivable for some users, considering the performance and the price. 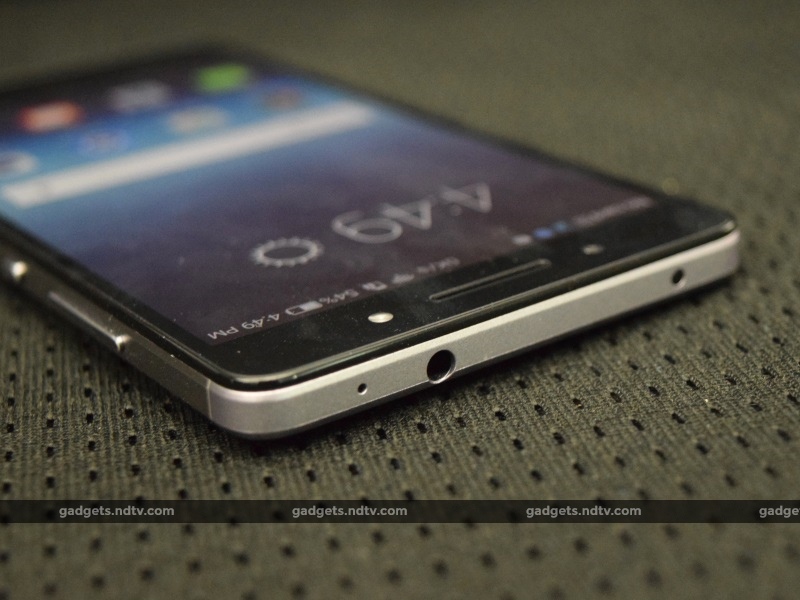 Verdict
Huawei has used its Honor range to successfully market quality products at competitive prices for a while now, and the online-exclusive strategy has resulted in some success. The Honor 7 is a beautiful device that embodies everything that a flagship smartphone should be. It has the right specifications, great features that will force you to question the value of competing devices, and a truly premium look and feel.

Furthermore, everything simply works well, whether it is the camera, fingerprint sensor, overall performance or the heat dissipating design. All of this is complemented by thoughtful touches such as the smart key, front flash, and heavy customisability in the settings menu. The Honor 7 is an excellent smartphone, and represents serious value at the price. We highly recommend this phone for anyone with a budget of up to Rs. 25,000.