Honor X20 5G will be offered in two colour options and come with dual-selfie cameras. 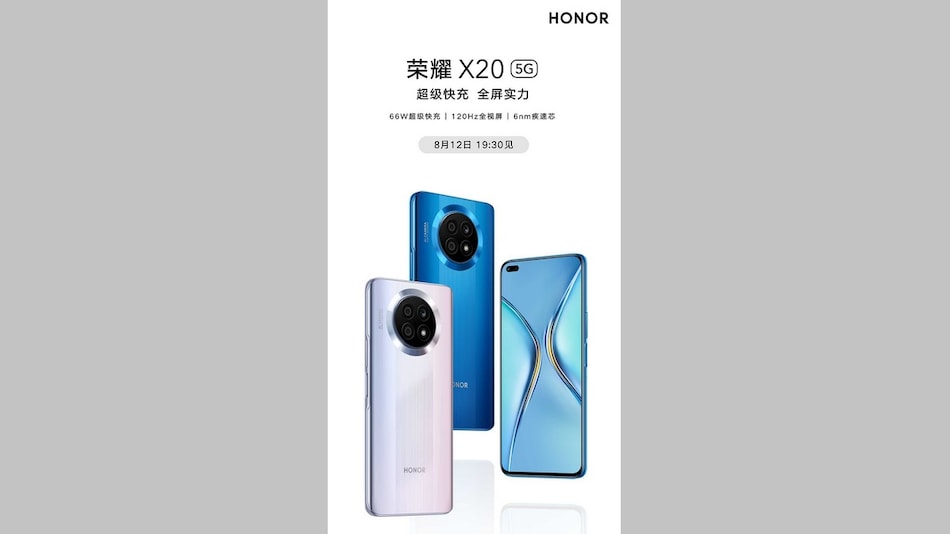 Honor X20 5G will have a triple rear camera setup

Honor X20 5G will be launched in China on August 12, the company has confirmed. The phone, though named the Honor X20, will be the second in the series following the Honor X20 SE that launched late in June. Honor has also shared a couple of specifications for the phone revealing that it will be powered by a processor based on 6nm architecture. The poster shared by the company also shows tow colour options, a triple rear camera setup, and a dual-selfie camera setup.

Honor took to Weibo to share a poster for its upcoming Honor X20 5G, announcing that the phone will be launched on August 12 as 7:30pm in China (5pm IST). The poster shows two colour options, a blue and a light purple. Notably, known tipster Evan Blass (@evleaks) shared renders of the Honor X20 5G on Twitter showing a third black colour variant.

A triple rear camera setup can be seen housed in a circular camera module on the Honor X20 5G. The setup includes a 64-megapixel primary sensor and details about the other two sensors are currently unclear. At the front, a pill-shaped hole-punch cutout can be seen, likely hosing two sensors. Additionally, a side-mounted fingerprint scanner can be seen as well. In terms of specifications, the poster reveals support for 66W fast charging, a 120Hz refresh rate display, and a 6nm processor which is expected to be the octa-core MediaTek Dimensity 900.

Compared to the Honor X20 SE that launched in June this year, the Honor X20 5G has a flat display rather than a curved one. The SE variant has a different camera setup but houses a 64-megapixel primary sensor as well. It, however, sports a single selfie shooter and has slower 22.5W charging support. It is powered by the MediaTek Dimensity 700 SoC which is designed on the 7nm architecture which suggests the Honor X20 5G will come with an upgraded SoC.