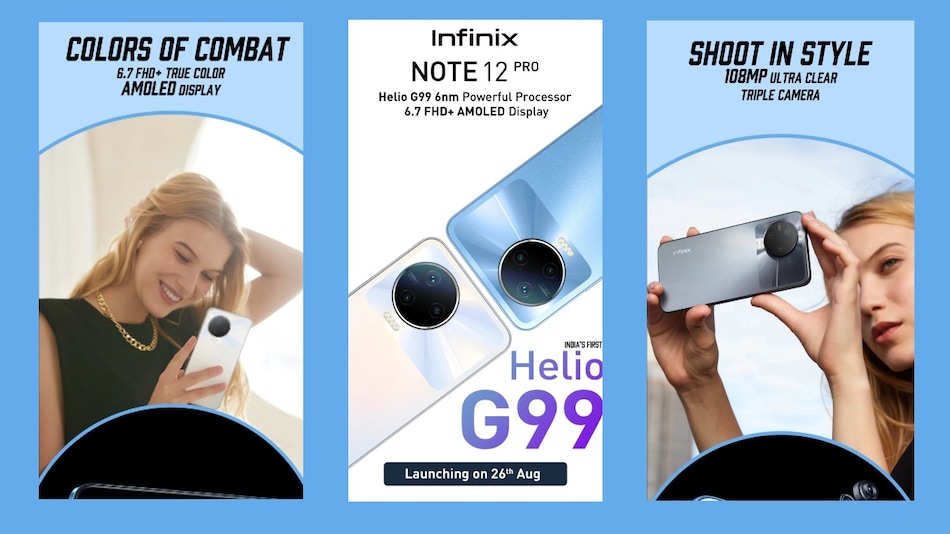 Infinix Note 12 Pro 4G will launch in India on Friday and will be available via Flipkart. The company has also revealed a few key specifications of this upcoming smartphone. It will be powered by a MediaTek Helio G99 SoC paired with 8GB of RAM and 256GB of storage. The Infinix Note 12 Pro 4G will sport a 6.-7-inch full-HD+ True Colour AMOLED display. Infinix has not revealed the pricing information of this smartphone, however, this 4G model is expected to be placed in the sub-Rs. 15,000 segment.

Infinix revealed the India launch date of the Infinix Note 12 Pro 4G via a listing on the Flipkart app under the upcoming launches section. It is set to debut in the country on August 26. The listing has confirmed that this handset will be powered by a MediaTek Helio G99 SoC.

The Infinix Note 12 Pro 4G will sport a 6.7-inch full-HD+ True Colour AMOLED display. It will pack 8GB of RAM and 256GB of onboard storage. Furthermore, there will be a 108-megapixel triple rear camera setup.

According to a recent report, this smartphone has already surfaced on AliExpress with its complete specifications. Apart from the already mentioned details, this smartphone also sports a 16-megapixel selfie camera. It comes with an Extended RAM feature that can add up to 5GB of virtual RAM. The smartphone comes with a multifunctional NFC feature.

This smartphone packs a 5,000mAh battery supporting 33W fast charging. The Infinix Note 12 Pro 4G boots Android 12 with XOS 10.6 skin out of the box. Its Lightning Multi-Window allows you to switch between various apps. It is equipped with a dual speaker system powered by DTS technology. Its Immersive Gaming system is designed to deliver an optimised experience. There is also a Linear Motor Tactile System with 4D vibration.