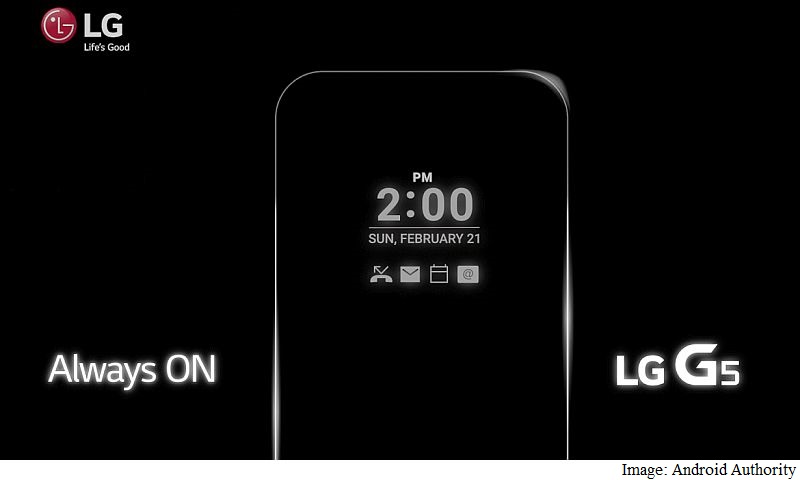 It seems Samsung's upcoming flagship, the Galaxy S7, won't be the only handset launching at MWC with an 'Always On' display feature. A new leaked teaser hints that LG's G5 flagship may also sport the similar feature.

Android Authority has obtained a gif image of the first LG G5 feature set to launch at the company's February 21 launch event at MWC in Barcelona. The gif image (only a frame of which is shown by the publication) is said to show several smartphone displays steadily growing dark, and then the LG G5 pops out with the time and date of the LG's MWC 2016 event in the middle. The notification that appears shows a series of notifications for calls, mails, calendar, and tweets. 'Always On' is mentioned and LG G5 are written on either side of the phone.

We will have to still wait for LG to reveal how the feature will work on the G5. But looking at the leaked teaser, the "Always On" feature of the LG G5 appears will work same as it worked for Moto devices with its Ambient Display feature.

LG had last month sent out invites for its MWC 2016 keynote event and earlier this month, the South Korean company confirmed that it would unveil its flagship smartphone - the LG G5 - on February 21.

Based on preliminary leaks, the smartphone is said to pack a dual rear camera setup. The G5 is also rumoured to sport a 16-megapixel rear camera with 135-degree wide-angle view. The handset is said to feature a ticker display, like the one we saw on the LG V10.

Some of the other details tipped include a 5.3-inch QHD display; presence of 'Magic Slot', which is said to be linked with some kind of hardware expansion; ticker display feature; Qualcomm Snapdragon 820 SoC; Android 6.0 Marshmallow; 3GB of RAM, and 32GB of inbuilt storage.

Internet Shouldn't Be the Monopoly of a Few, Says Communications Minister
Innovation in Smartphone Technology Has Slowed Down