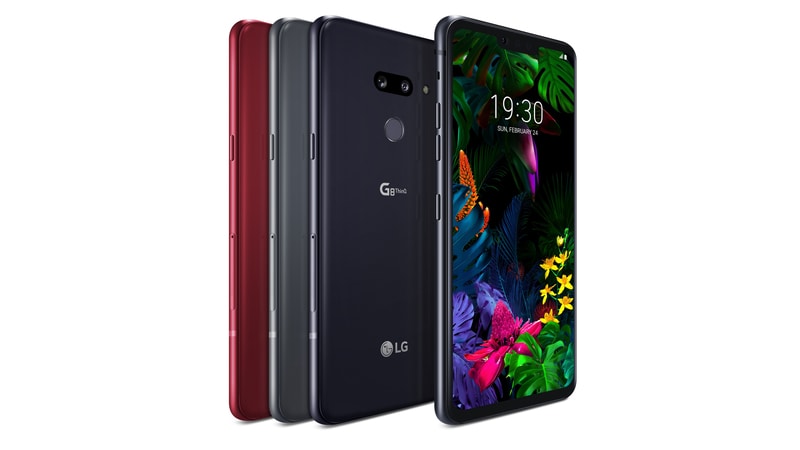 MWC 2019: LG G8 ThinQ price has not been detailed by LG, nor has its availability

LG G8 ThinQ was launched on Sunday at the Mobile World Congress (MWC) 2019 in Barcelona, alongside the LG G8s ThinQ and the LG V50 ThinQ 5G. The biggest highlight feature of the LG G8 ThinQ and the G8s ThinQ is the introduction of Hand ID - a new feature that provides palm vein authentication. This is enabled by use of the ToF (time of flight) Z Camera and infrared sensors, enabling users to hover their hand over the display to unlock their smartphones. Another significant highlight of the LG G8 ThinQ is the presence of a Crystal Sound OLED, which the company says eliminates the need for a front speaker or an earpiece - though the company's iconic BoomBox Speaker is retained at the bottom, and now capable of stereo output.

The LG G8 ThinQ is also MIL-STD 810G rated for durability, and has IP68 dust and water resistance. As we mentioned, the South Korean consumer electronics giant also launched the LG V50 ThinQ 5G, and you can read more about that smartphone in separate coverage. Getting back to the ToF Z Camera, it enabled other features, such as Air Motion, which allows users to answer/ end calls, take screenshots, switch apps, and adjust volume al with simple gestures. The ToF Z Camera also enables better Bokeh as well as Video Portrait mode. It also enables more secure 3D-based face recognition that isn't fooled by photographs. The LG G8s ThinQ is the cheaper variant of the G8 ThinQ, meant to provide G8 ThinQ offerings at a "competitive price."

As with most LG launches, the company has withheld some information. The LG G8 ThinQ price and the LG G8s ThinQ price have not been revealed, nor have availability. As before, the South Korean company will announce these details for individual markets closer to their availability. LG has detailed the colour variants of the LG G8 ThinQ though, saying it will be available in Carmine Red, New Aurora Black, and New Moroccan Blue.

On the front, the LG G8 ThinQ bears an 8-megapixel autofocus camera with an f/1.7aperture, 1.22-micron pixels, and an 80-degree lens. There is also a ToF Z Camera, which as we mentioned is combined with infrared sensors to enable Hand ID palm vein authentication. There is also face unlock, apart from a fingerprint sensor on the rear panel.

Evidently the more affordable variant of the two, with a full-HD+ display instead of a quad-HD+ one, the LG G8s ThinQ unfortunately doesn't have too many specifications revealed. Here's what LG has disclosed - it sports a 6.2-inch full-HD+ (1080x2248 pixels display) with an 18.7:9 aspect ratio, is powered by the Qualcomm Snapdragon 855 SoC coupled with 6GB of RAM.

As for optics, the LG G8s ThinQ bears a toned-down triple rear camera setup, with a 12-megapixel primary sensor, a 13-megapixel wide-angle sensor, and a 12-megapixel telephoto lens. On the front, it bears an 8-megapixel sensor, coupled with the ToF Z Camera, thus enabling the Hand ID, Air Motion, and Face Unlock features. It ships with 64GB or 128GB of inbuilt storage, not expandable via microSD card. It runs on a 3,550mAh battery.