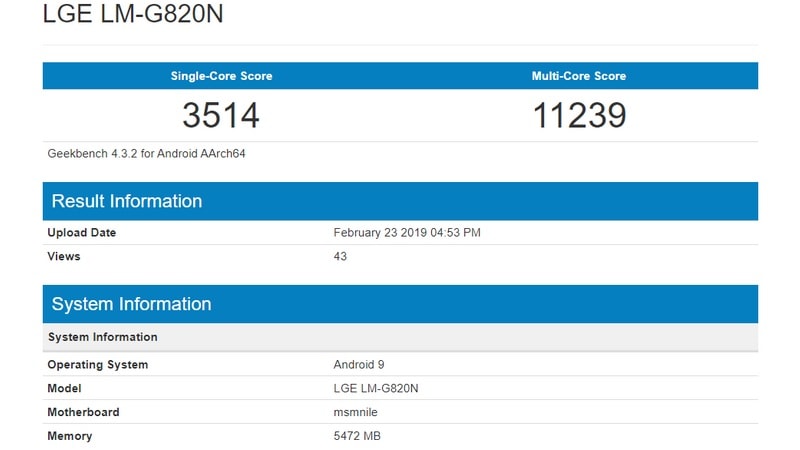 LG is all set to unveil the LG G8 ThinQ alongside the LG V50 ThinQ 5G later today at the company's official launch event in Barcelona, but it appears that there is no stopping the leaks from spoiling the surprise. The LG G8 ThinQ has allegedly been spotted on a benchmarking platform running Android 9 Pie and powered by an octa-core Qualcomm SoC paired with 6GB of RAM. Additionally, alleged hands-on images of the flip-cover display or the secondary screen case for the LG V50 ThinQ have surfaced online.

The LG G8 ThinQ, which has already been leaked multiple times in the past few months in the form of CAD-based renders and alleged press renders, has now reportedly been spotted on Geekbench. The upcoming LG flagship was sighted running Android 9 Pie while drawing power from an octa-core Qualcomm SoC paired with 6GB of RAM. As per previous leaks, the Qualcomm processor powering the LG G8 ThinQ will be the Snapdragon 855. The LG G8 ThinQ's Geekbench listing was spotted by Nashville Chatter.

Other rumoured features and specifications of the LG G8 include a 3D ToF (Time-of-Flight) technology-backed front camera, a 6.1-inch display with 19.5:9 aspect ratio, and a 3,400mAh battery. LG, on the other hand, has confirmed that the LG G8 ThinQ will come equipped with a Crystal Sound OLED (CSO) technology that will allow the smartphone's display to act as an audio amplifier.

Moreover, a trio of images allegedly depicting the LG V50 ThinQ's flip-cover attachable display or the secondary screen case has surfaced online. LG was rumoured to launch a foldable smartphone in 2019, but as per a recent report, the company nixed the plan for a foldable device and instead moved forward with the plan to unveil an attachable display for the LG V50 ThinQ.

The leaked images, which come courtesy of SlashLeaks, claim to show the attachable display case that looks more like a flip cover with a display on its inner face. The frame of the display cover case shows a Pogo connector that will serve as the docking point for the LG V50 ThinQ. The attachable display case appears to have a conventional smartphone screen's design with rounded corners and thick top and bottom bezels.