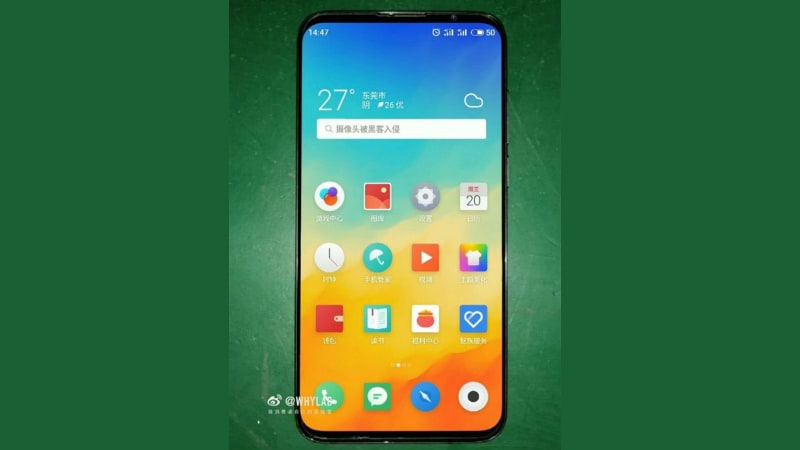 After many leaks, Meizu has finally confirmed that the Meizu 16s will be unveiled on April 23. The phone will be unveiled in China, and its launch in international markets still remains a mystery. The Meizu 16s was recently spotted on TENAA, revealing its specifications and design details as well. The smartphone has been in rumours for a while, and is said to be a flagship-grade smartphone running on Qualcomm's top-end Snapdragon 855 SoC and sporting a 48-megapixel Sony IMX586 sensor.

Meizu took to Weibo to announce that the Meizu 16s will launch in China on April 23. Notably, this is the same date that Lenovo will launch the Lenovo Z6 Pro flagship smartphone. The Meizu 16s launch date announcement reveals little else about the phone, but it is rumoured to sport a 6.2-inch AMOLED display, a 3,540mAh battery, and measure 151.9x73.4x7.65mm. A TENAA spotting suggests that the phone will run Android 9 Pie, feature an octa-core processor clocked at 2.8GHz (probably the Snapdragon 855) coupled with 8GB of RAM, offer 128GB of inbuilt storage, and weigh 166 grams. Unfortunately, camera details still remain a mystery.

The TENAA listing suggests that the Meizu 16s will sport very thin bezels up front. A spy photo reveals that it will sport a notch-less display with really narrow forehead that will house the camera and the earpiece. There's also a dual camera setup at the back that is expected to house a 48-megapixel primary Sony IMX586 main sensor with a 0.8-micron pixel size. There is a secondary camera as well but the details are unknown at the moment. It is seen to have a ring LED flash. The Meizu 16s phone should be priced around CNY 3,300 (roughly Rs. 39,900) when it launches in China.