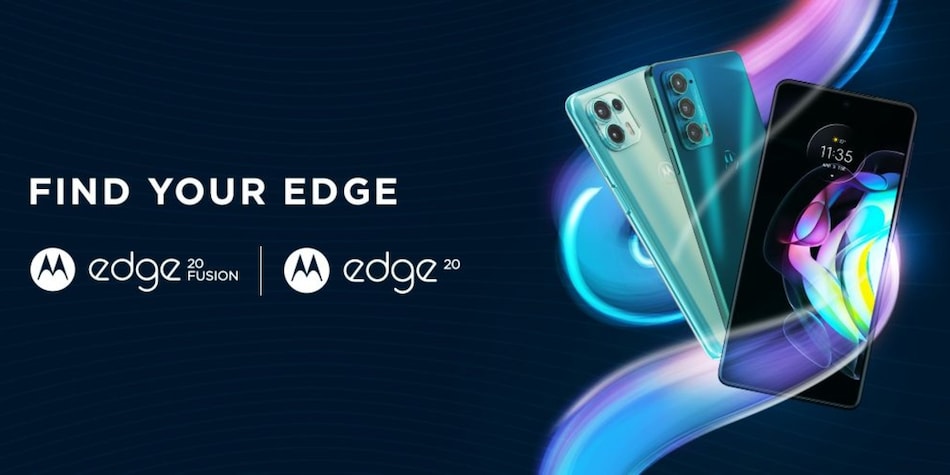 The Motorola India accounts on Facebook, Twitter, and YouTube have started teasing the launch of the Motorola Edge 20 and Motorola Edge 20 Fusion in the country. The company has changed the cover image on its social media accounts to confirm the arrival of the two new Motorola phones. It also appears that Motorola has decided to skip the Edge 20 Pro from its Edge series coming to the Indian market.

When a stunning design, cutting-edge technology meet flagship experience, that is when you #FindYourEdge. Introducing #motorolaedge20. Stay tuned! pic.twitter.com/LE2beTnRgS

Motorola Edge 20 price in India is yet to be revealed, though the phone could be priced similar to what was announced in Europe last month. The phone came at a starting price of EUR 499.99 (roughly Rs. 43,600) for the 8GB RAM + 128GB storage variant. It also comes in Frosted Onyx and Frosted Pearl colours.

The Motorola Edge 20 Fusion, on the other hand, is expected to be the rebadged Motorola Edge 20 Lite that came to Europe at EUR 349.99 (Rs. 30,500) for the 8GB RAM + 128GB storage model and features Electric Graphite and Lagoon Green colours.

Crafted for style and built with premium features, a remarkable smartphone is born. Bringing you #motorolaedge20fusion. Stay tuned! pic.twitter.com/CiMJ1pVL8f

Motorola had not provided the India launch date of the Edge 20 series at the time of filing this story. However, Gadgets 360 has reached out to the company for the details and will update this space when it responds.

The dual-SIM (Nano) Motorola Edge 20 runs on Android 11 with My UX on top and features a 6.7-inch full-HD+ (1,080x2,400 pixels) OLED display with a 144Hz refresh rate and HDR10+ support. The phone is powered by an octa-core Qualcomm Snapdragon 778G SoC, along with 8GB of RAM as standard. It comes with a triple rear camera setup that houses a 108-megapixel primary sensor, 16-megapixel ultra-wide shooter, and an 8-megapixel sensor with a telephoto lens that enables 3x high-res optical zoom and 30X digital zoom.

For selfies and video chats, the Motorola Edge 20 has a 32-megapixel selfie camera sensor at the front, along with an f/2.24 lens.

The Motorola Edge 20 has 128GB and 256GB of onboard storage options. Connectivity options include 5G, 4G LTE, Wi-Fi 6 and 6E, Bluetooth v5.2, GPS/ A-GPS, NFC, and a USB Type-C port. Sensors on board include an accelerometer, ambient light, gyroscope, magnetometer, and a proximity sensor. The phone also comes with a side-mounted fingerprint sensor and has an IP52-certified build.

Considering it as the rebranded Edge 20 Lite, the Motorola Edge 20 Fusion is also expected to have the same triple rear camera setup, with a 108-megapixel primary sensor, 8-megapixel ultra-wide shooter, and a 2-megapixel depth sensor. The phone could also carry a 32-megapixel selfie camera sensor, with an f/2.25 lens.

The Motorola Edge 20 Fusion is also likely to have 128GB of onboard storage as standard and include a 5,000mAh battery, along with 30W TurboPower fast charging.