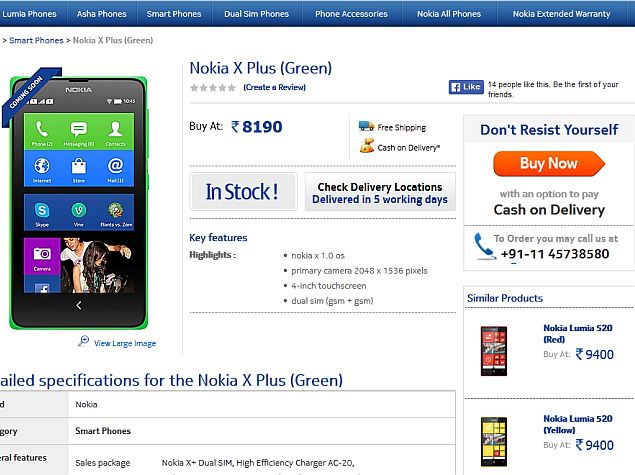 The latest Nokia X series smartphone has been listed as 'in stock' on the company's official India store, with the option to 'buy now'. Notably, only the Green variant of the Nokia X+ Dual SIM is listed on the store right now.

Similar to other Nokia X smartphones, the Nokia X+ also runs the Nokia X software platform that's based on the Android Open Source Project, and can run Android apps from the Nokia Store and other third-party app stores (Google Play not supported). It comes with 4GB of built-in storage, which is further expandable up to 32GB via microSD card. The Nokia X+ sports a 3-megapixel rear camera without flash.

Microsoft, at the time of India launch of the Nokia X+ Dual SIM, had also announced that it has tied up with Airtel to offer users free unlimited download of Android apps for six months on the Nokia XL Dual SIM (Review | Pictures). As per the company, Airtel subscribers using Nokia XL will get up to 500MB of free data usage to download apps via the Nokia Store and the 1Mobile store.