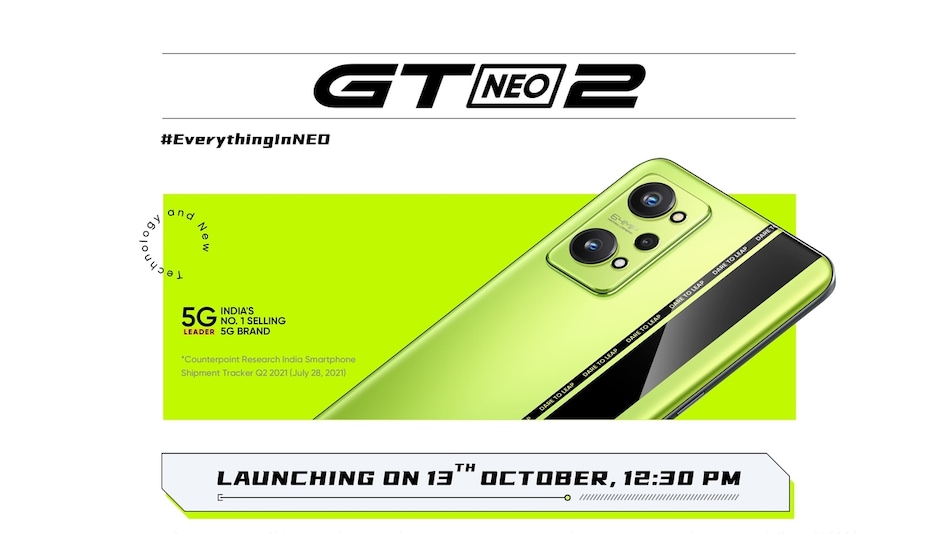 Realme GT Neo 2's launch date in India is set for October 13, Realme confirmed through a press note and a microsite on the company's website. The smartphone will be launched through a virtual event that will be held on Realme's official channels. Some specifications of the Realme GT Neo 2's India variant have also been confirmed through the dedicated microsite while some have been tipped. Realme mentions that the smartphone will be powered a Snapdragon 870 SoC and will feature a 120Hz refresh rate Samsung E4 AMOLED display.

A dedicated microsite on Realme's website reveals that the Realme GT Neo 2 will be launched in India on October 13 at 12:30pm IST through the tech giant's YouTube and Facebook channel. The microsite also confirms some of the key specifications of the upcoming smartphone. The price of the smartphone is not known as of now.

Unmatched Power Inside!
The #realmeGTNEO2 is powered by the Snapdragon 870 5G Processor for a truly powerful performance.
It is indeed the Best 5G Processor in the Segment. #EverythingInNEO

Launching at 12:30PM, 13th October on our official channels.https://t.co/m2ilqmjcih pic.twitter.com/r1TtNedSQK

As per the microsite, the Realme GT Neo 2 will be powered by a Snapdragon 870 SoC. The chipset is said to be paired with up to 12GB of RAM and up to 256GB of onboard storage. The microsite also mentions that the upcoming smartphone will pack a 5,000mAh battery with 65W SuperDart Charge fast charging support. It will sport a Samsung E4 AMOLED display with a 120Hz refresh rate, 600Hz touch sampling rate, and 1300 nits peak brightness. The display is also said to have 15 percent lower power consumption.

The Realme GT Neo 2 will be available in Neo Black, Neo Blue, and Neo Green colour options. Furthermore, the smartphone also has stainless steel vapour cooling system that is said to reduce the core temperature of the processor by up to 18 degrees Celsius.

As for other specifications, we can take a look the Chinese variant of the Realme GT Neo 2, which was launched in September. That variant featured a triple rear camera setup with a 64-megapixel primary sensor, an 8-megapixel ultra-wide shooter, and a 2-megapixel macro sensor. It also features an in-display fingerprint scanner. We can expect similar specifications on the India variant.