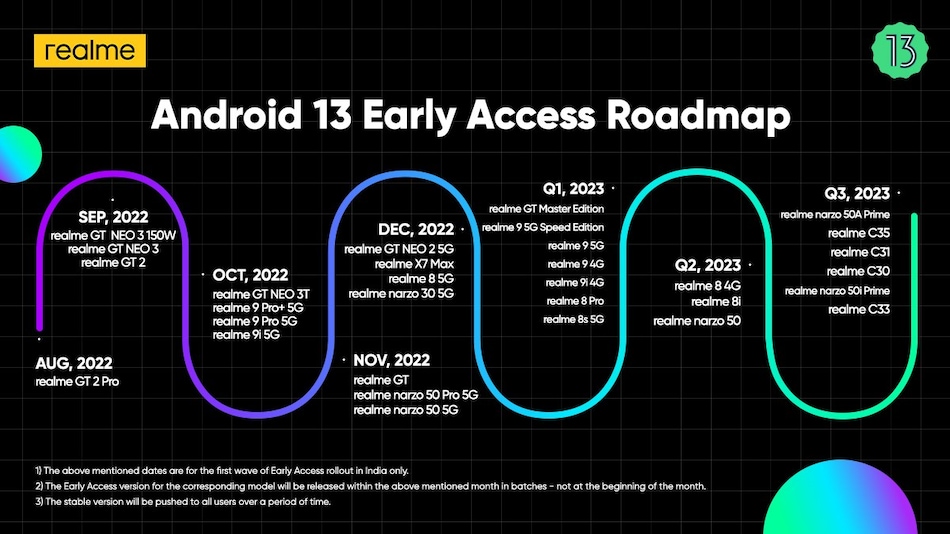 These Realme smartphones will also get Android 13 update outside India

Realme CEO Madhav Sheth revealed the Android 13 Early Access roadmap for India on Monday. The plan involves providing the Android 13-based Realme UI 4.0 update to over 30 smartphones by Q3 2023. The company later confirmed that Realme customers with any of these 30 handsets residing outside India will also receive the Android 13 update, however, it will be rolled out at a different time. Realme suggests that the early access updates will be followed by a beta one release, both taking up to four weeks each.

Sheth tweeted the roadmap on Monday that reveals that the Realme GT Neo 3 and its 150W variant, along with the Realme GT 2, will get Android 13 Early Access by the end of September. Realme already began gathering early adopters for the Realme GT 2 Pro in August.

Realme then shared a community post dishing out further details regarding the Android 13 Early Access roadmap. It has revealed that the early access stage for these smartphones will last for up to four weeks, followed by another four weeks of beta one testing. Only after these updates can customers expect a stable Android 13 update to roll out for their respective Realme smartphones.

The listed devices will receive the Android 13, irrespective of whether they are in India or not. However, all regions may not get an early access program. Realme smartphones outside India are expected to get the stable Android 13 update at a later date.

Here is the complete Android 13 Early Access roadmap for India revealed by Realme: