The update is rolling out to users in India, Malaysia, and Thailand. 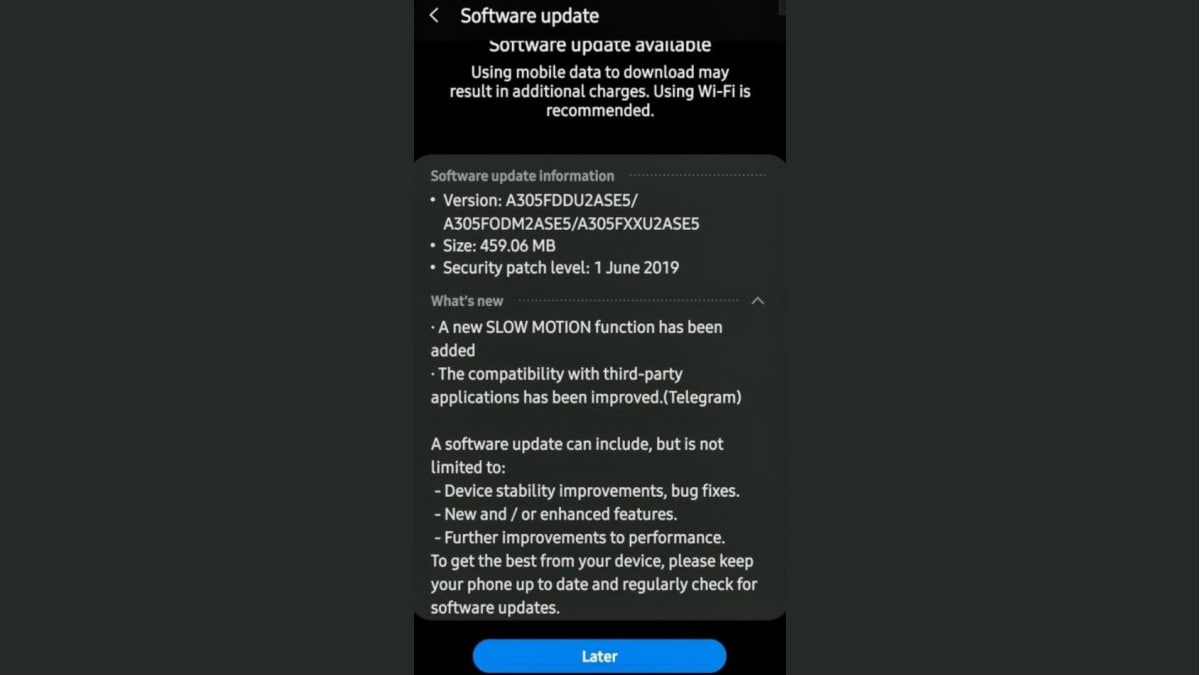 Samsung Galaxy A30 has got a new update

The firmware version for the latest Samsung Galaxy A30 update is A305FDDU2ASE5, and its size is at 459MB, reports TizenHelp. According to the screenshot shared of the changelog, the update brings along the slow-motion mode and improved compatibility with third-party apps. The update especially improves compatibility with Telegram, the changelog notes. As mentioned, it also brings the June 2019 Android security patch as well.

The report also says that the update is rolling out to users in India, Malaysia, and Thailand. The rollout is available over-the-air (OTA) and you can check manually by going to Settings >Software Update > Download and Install option.

The dual-SIM (Nano) Samsung Galaxy A30 runs Android Pie with One UI on top. The phone features a 6.4-inch full-HD+ (1080x2340 pixels) Super AMOLED Infinity-U Display and is powered by an octa-core Exynos 7904 SoC, paired with lone 4GB RAM option.

The Samsung Galaxy A30 has 64GB of onboard storage that is expandable via microSD card (up to 512GB). There is a fingerprint sensor at the back. Besides, the phone packs a 4,000mAh battery that supports 15W fast charging via USB Type-C port

Robert Pattinson’s The Batman Not an Origin Story, but a Bruce Wayne ‘Trying to Find His Footing’
Airtel Postpaid Plans of Rs. 349, Rs. 399 Introduced for Select Circles With Up to 40GB Data, Unlimited Voice Calling, 100 SMS Messages Per Day