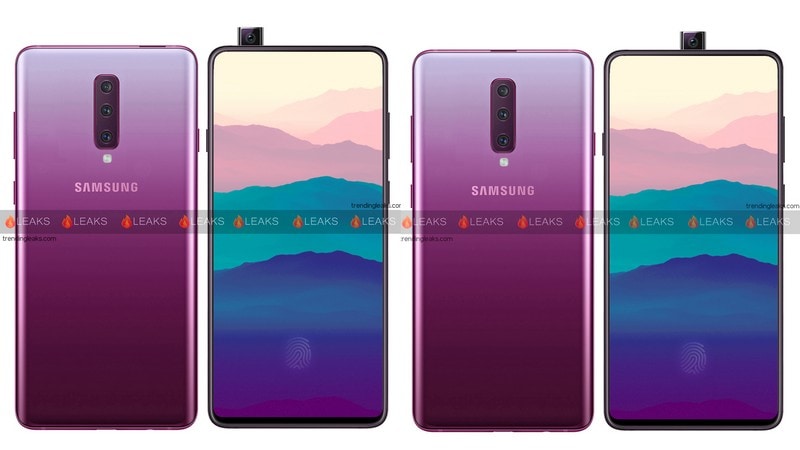 The Galaxy A90 will reportedly feature an in-display fingerprint sensor

A couple of days ago, reports emerged that the Samsung Galaxy A90 will come equipped with a pop-up selfie camera and will sport a display devoid of a notch or a hole-punch cutout. Concept renders of the upcoming smartphone have now surfaced online and they claim to show how the Samsung Galaxy A90's pop-up selfie camera will look. The renders also give us a closer look at the Galaxy A90's entire profile, down to its almost bezel-free display and a triple rear camera setup.

The new Samsung Galaxy A90 concept renders, that come courtesy of Trending Leaks and were spotted by GSMArena, show the upcoming smartphone flaunting a pop-up camera module placed at two different spots on the top edge. The leak adds that the Samsung Galaxy A90 renders are not an accurate depiction of the upcoming smartphone, however, the end product might share some aesthetic similarities with the renders. Needless to say, process the veracity of these renders with the proverbial pinch of salt.

The renders also claim to show the upcoming smartphone's vertically aligned triple rear camera setup, but again, there is no information available about the resolution or the size of the imaging sensors. Another important thing to note here is that the alleged Samsung Galaxy A90 renders show a fingerprint pattern on the lower portion of the display, indicating that it will come equipped with an in-display fingerprint sensor. As per previous leaks, the Samsung Galaxy A90 is among the nine Galaxy A-series smartphones the company is expected to launch later this year and it is also tipped to feature an optical in-display fingerprint sensor.

The new leak does not shed any light on the specifications of the Samsung Galaxy A90, but as per a previous report, it is expected to run on One UI based on Android Pie. As for the rest of the specifications, the upcoming Samsung smartphone will reportedly be powered by the Snapdragon 710 SoC coupled with 6GB or 8GB of RAM and 128GB of internal storage.