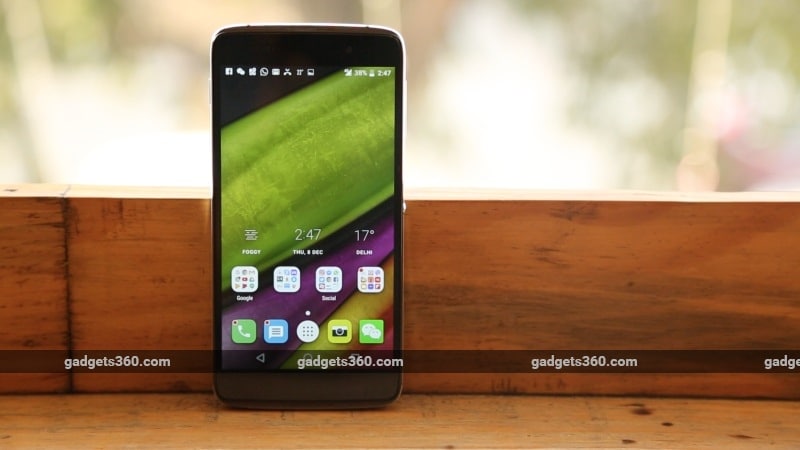 Alcatel on Thursday launched its Idol 4 smartphone in India, around 10 months after it unveiled the model at its pre-MWC 2016 event. The company told us that it chose to skip over the Alcatel 4s, which was showcased along with Idol 4, due to cost-related concerns. The Alcatel Idol 4 has been priced at Rs. 16,999 and will be available exclusively from sale on Flipkart.

Notably, the Alcatel Idol 4 is identical to Blackberry's DTEK50 smartphone (REVIEW), which was launched last month in India, except for its software and the rear panel, which is glass on Alcatel's phone and rubberised on Blackberry's. Both are manufactured by TCL.

The smartphone will be sold in Gold, Dark Grey, and Metal Silver colour variants.

At the launch event, we got a chance to spend some hands-on time with the device, and here are our first impressions.

One of the most appealing things about the Alcatel Idol 4 is its design, especially considering its price. Even though it is a mid-range smartphone, it can easily be passed off as a high-end device. The smartphone measures 147x72.5x7.1mm and weighs just 135 grams. It has a thin frame, which makes it easy to hold. The body is said to be durable enough to survive occasional drops. During the launch event, an Alcatel representative deliberately dropped the phone from around 3-4 feet and it was unaffected.

However, considering that this phone has a glass back, it might not be a wise idea to perform drop tests frequently. Also, the glass does act like a fingerprint magnet, which might annoy some users.

One jarring aspect of the design of the phone is that the power button is placed on the upper left side, which is unusual and inconvenient. The volume rocker is on the right.

Coming to the 5.2-inch full-HD (1080x1920-pixel) IPS LTPS display, we found it to be satisfactory, but nothing out of the ordinary. As we had limited time with the phone and couldn't test the screen outdoors, we will reserve our opinion till we can conduct a full review.

If there is one standout feature of this smartphone, it is its speakers. The sound department is where the Alcatel Idol 4 truly shines, and it can even be compared to high-end phones in this regard. The Idol 4 features speakers at the top as well as the bottom of the front. Interestingly, as the grilles are perforated through the body, sound from the speakers is able to spread out through the back even when the phone is placed face-down. The volume and the quality of sound output are both impressive. The phone further comes preloaded with an app called Waves which allows users to tweak several options related to the sound.

The Boom Key, which is located on the right of the phone, can be customised to function as per a user's liking. It can be set to launch any app with just one press. We found it to be interesting and useful.

The dual-SIM Alcatel Idol 4 runs on Android 6.0.1 Marshmallow and is powered by an octa-core Qualcomm Snapdragon 617 processor with integrated Adreno 405 graphics, and has 3GB of RAM. We found that the preloaded apps on the device were not all useful.

Interestingly, due the incorporation of a mic and speakers at both top and bottom of the Alcatel Idol 4, users can talk on the phone using the device held either way.

Alcatel bundles a VR headset with this phone, which is lightweight and comfortable to wear. The build quality of the headset is acceptable, and it seems to fit the smartphone well. However, we noticed some VR apps stuttering as they loaded, and motion tracking wasn't smooth. As we did not get too much time with the VR headset, you will have to wait for our full review to know more about the headset.

The Alcatel Idol 4 has 16GB of built-in storage, which is expandable (up to 512GB) using a microSD card. The smartphone also has a 2610mAh battery and supports Quick Charge version 2.0. In terms of connectivity options, it offers 4G LTE, Wi-Fi, Bluetooth 4.2, USB OTG, and a 3.5mm headphone jack.

In its price range, the Alcatel Idol 4 will face tough competition from the Oppo F1s (Review), Vivo V5, and Gionee S6s (Review). It will be interesting to see if the unique features of this smartphone will help it gain traction in the market.

For more updates about the Alcatel Idol 4, stay tuned to Gadgets 360.