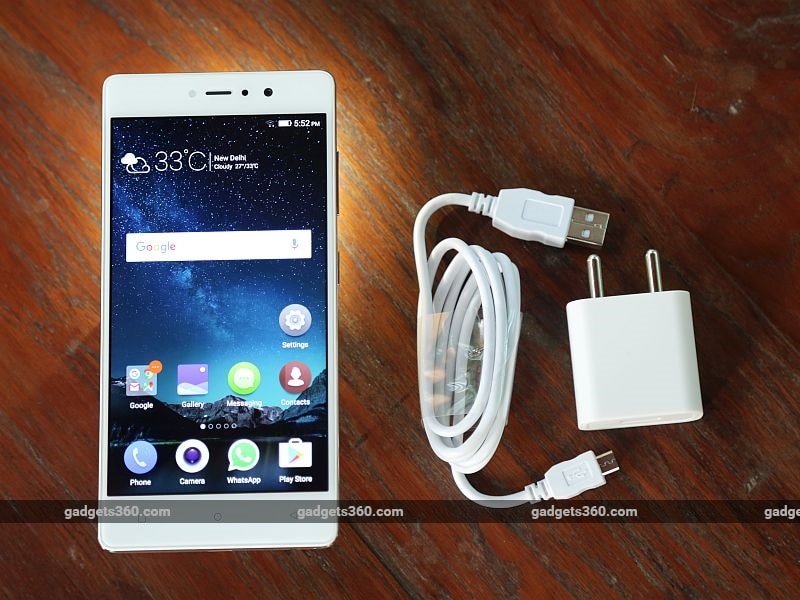 Gionee has been expanding its smartphone portfolio 'wisely' in India. What it means is that unlike some Chinese handset brands, Gionee smartphones are not just limited to one price segment.

The 'S' series is the company's premium handset series, and we saw the launch of the Gionee S6 at the beginning of this year. The Chinese company has now unveiled the upgraded Gionee S6s smartphone and claims the "selfie flash" is the biggest highlight of the handset. Gionee claims it is targeting young buyers in the age group 18 to 25, and selfie-obsessed with its new handset.

But with unibody metal build and decent under the hood prowess, will the Gionee S6s perform better than other smartphones in its price segment? Let's find out in our review.

Look and feel
The unibody design of the Gionee S6s feels sturdy when held in hands. The metal sides offer decent grip but at 166 grams, the Gionee S6s is slightly heavy for its size.

The front is dominated by the 5.5-inch 2.5D curved display that comes with Corning Gorilla Glass coating, while the rear is all metal. A Gold lining runs throughout the corners at the back of the handset that gives it a premium feel. Gionee, as seen in its other smartphones, has used three capacitive buttons for Back, Home, and Recent. The front camera accompanied by an LED flash sits on top of the display.

The rear panel packs the primary camera with LED flash while there is the fingerprint scanner placed right below the camera. Gionee's new logo is placed underneath the fingerprint scanner and makes for perfect symmetry. A speaker grille is placed at the bottom accompanied by the company branding. The right panel houses the power and volume rocker buttons while the left packs the hybrid SIM slot. The bottom holds the regular Micro-USB charging slot and a 3.5mm audio jack. At 8.15mm thickness, the Gionee S6s is definitely not the slimmest smartphone available in the market but during usage it didn't feel uncomfortably thick.

We however want to point it out that if the 'Gionee' branding was removed from the back of the handset, the S6s could easily be mistaken for a phone launched by Oppo, Huawei, or LeEco. With metal unibody design, the back panels of several handsets have started to look similar in a lot of aspects. For example, the lines at the top and bottom of the handset and the rounded fingerprint scanner as well as its placement right below the camera look all too familiar.

The company unveiled the S6s in just two colours Latte Gold and Mocha Gold in India. We got the Latte Gold unit for review.

The 5.5-inch full-HD display was sharp and fairly bright. We were impressed by the sunlight legibility of the S6s smartphone. Viewing angles were not an issue during our usage. Gionee ships the S6s with an in-cell IPS display and it had decent Black levels. Watching movies and playing games on the Gionee S6s is a treat with no noticeable real world issues.

Overall, the Gionee S6s scores well in terms of design and the build looks solid. However, we wish that the corners of the handset were more rounded for ease of use.

Specifications and software
The Gionee S6s features a 5.5-inch full-HD (1080x1920 pixels) IPS display and comes with Corning Gorilla Glass. The company has used the 2.5D curved glass on the S6s that has lately been seen many handsets, even those launching at lower price tags. The dual-SIM Gionee S6s runs the company's Amigo 3.2 based on Android 6.0 Marshmallow.

It is powered by a 1.3GHz octa-core MediaTek MT6753 SoC, coupled with 3GB of RAM. It's worth noting that Gionee has been one of the brands that has been persistently using MediaTek chipsets. At launch, we asked Arvind Vohra, Country CEO and MD, Gionee India, why the company chose MediaTek chipsets and not Qualcomm Snapdragon SoCs. Vohra responded claiming that the MediaTek chipsets were capable of delivering what Gionee wanted its phones to do and that was enough to go with the SoCs.

The S6s sports a 13-megapixel autofocus rear camera with Sony IMX258 sensor, an f/2.0 aperture, and an LED flash. There is an 8-megapixel fixed-focus front-facing camera with an LED flash. The front camera comes with an f/2.2 aperture, and a 5P lens. Additionally, the front camera also features screen flash support. The S6s comes with 32GB of on-board storage and supports hybrid dual-SIM card slot that means it can be expanded via microSD card (up to 128GB).

As for connectivity options, the Gionee S6s offers 4G (with VoLTE), Wi-Fi 802.11 a/b/g/n, Bluetooth 4.0, 3.5mm headphone jack, and Micro-USB. It is backed by a 3150mAh non-removable battery, and features a fingerprint sensor on the rear panel. The S6s ships with regular Micro-USB slot which means no USB Type-C connectivity. The Gionee S6s comes bundled with a display protector film and a transparent case.

The Gionee S6s runs the company's proprietary Amigo 3.2 custom ROM which is based on Android 6.0 Marshmallow. There are some new visual effects on the S6s that were not available in earlier models. Users can now arrange the apps on different home screens with the help of two new options - Cleanup, that clears either the top or bottom of the home screen for addition of new apps, and Arrange, which will help users arrange installed apps spread across various panes.

Since the Gionee S6s smartphone runs Amigo 3.2 based on Marshmallow, we noticed several Android M features such as the Now on Tap and App permissions.

As before, there is no app drawer and all the apps are spread across multiple home-screens. Many Chinese handset manufacturers have toned down their custom Android version, which means the devices now feature less pre-loaded apps. Unfortunately, this cannot be said for Gionee as the S6s smartphone ships with several pre-loaded apps. To name a few apps included in the phone were Gionee Xender, Hotoday, Compass, Mobile anti-theft app, G Store, System Manager, and Mood Wallpaper. Gionee is shipping the S6s with its Chameleon app that can pick a colour from any object using the camera and then make a theme based on the colour.

The software on the Gionee S6s comes with a lot of features such as Fake Calls, Super Screenshot tool, Theme Park, and extreme battery mode settings, and other software features previously also seen on the Gionee Marathon M5 Plus (Review).

The Gionee S6s on the software front surely looks better than the Marathon M5 Plus that ran Amigo 3.1 on top of Android 5.1 Lollipop. However, the biggest disappointment in terms of software was the number of pre-loaded apps and the fact they can't be removed.

Performance
We didn't face any lags during multi-tasking or were bugged by any serious performance related glitches in daily usage. We noticed the Gionee S6s dropped some frame when we played games like Dead Trigger 2. We also experienced slight heating issues during long gaming sessions, but nothing that would make the phone uncomfortable to hold.

Voice calls on the Gionee S6s were clear and we didn't face call drops due to handset issues. We spent considerate time on the Gionee S6s reading e-books and had no issues with the display. 4G connectivity was no problem, though we didn't get a chance to test VoLTE.

Performance was decent on the Gionee S6s and it handled whatever we threw at it. The AnTuTu benchmark test gave us a score of 38,208, and we got a score of 21,585 on Quadrant, while the GFXbench returned 13fps in the T-Rex test.

We have to specially mention the Music app that offers plenty of tweaking options. The music quality from speakers was decent and it handled loud music without any problems. The speakers, however, are not very ideal for long movie-watching sessions. We preferred the bundled earphones, which delivered better audio enhancements with good bass levels.

The 13-megapixel autofocus rear camera on the Gionee S6s ships with a Sony sensor and it clicked some decent shots with good amount of detail and colour accuracy. One will however notice lack of details when cropping the photos or zooming in the images. The edges also lacked detail. We were however surprised with the quality of low-light shots taken by the S6s. The images clicked by S6s in low-light were, for example, better than the Marathon M5 Plus.

One of the biggest selling points of the Gionee S6s as marketed by the company is its front camera. The 8-megapixel fixed-focus front camera comes with its own flash module and packs an f/2.2 aperture with a 5P lens. Selfies are great with decent colour accuracy, if taken in well lit conditions. Unfortunately, the same cannot be said for indoor settings with low lighting. Gionee has added a front flash as well as screen flash for making the selfies look great. But unfortunately, the flash is effective to only some extent. The front flash, for example, wouldn't be of much help in completely dark conditions.

We were impressed with camera app on the Gionee S6s which launched quickly and did not suffer from any lags. There are plethora of options to choose from including Panorama, Slow motion, Macro, Night, Time lapse, Text recognition, HDR, Professional, Smart scene, Ultra pixel, Mood photo, PicNote, GIF, and Smart scan. The camera app also offers additional settings such as option to choose Scene mode, Exposure, and White balance among others. The rear camera is capable of recording videos at 1080p quality.

Battery Life
The Gionee S6s smartphone packs a 3150mAh battery that is non-removable. In our video loop tests, the Gionee S6s lasted for 13 hours and 10 minutes, which is good. The S6s also managed to beat its predecessor (the S6) by over an hour. Considering that the Gionee S6 (Review) shipped with the same battery size as the S6s, we wanted to understand how the S6s was able to deliver more than its predecessor in the same tests. Gionee's product team informed Gadgets 360 that the latest version of Amigo comes with some battery specific optimisations that help in getting more battery backup.

In regular usage, the Gionee S6s easily lasted for over a day and we only charged the handset after almost 30 hours from the last charging time. We noticed the handset only took over two hours to fully charge from zero, even though it officially doesn't support fast charging.

Verdict
At Rs. 17,999, the Gionee S6s makes for a decent package with all-metal design. But considering that the company is pushing the Gionee S6s as the best selfie smartphone out in the market we were not very impressed with the low light front camera performance.

We were also not very happy with the overall performance as we noticed slight heating issues during our usage and frame drops while gaming. The overall experience with the Gionee S6s is however satisfactory, with no real big issues that would bother someone in daily usage.

Considering that there are a lot of smartphones priced around Rs. 15,000 that come with the exact package that Gionee is offering with the S6s, we wonder how Gionee will position it in the market. A slightly lower price for the S6s would have definitely helped the company seal the deal. One of the biggest advantages for the Gionee S6s will be its availability from offline retailers as well.

UPI Goes Live, Making It Possible to Transfer Money Without Bank Details
Android Is Getting Better, Nexus Is Getting Worse