Realme C25 Review: A Bit of Give and Take

A decent budget option, but does it stand up against Realme's own Narzo series? 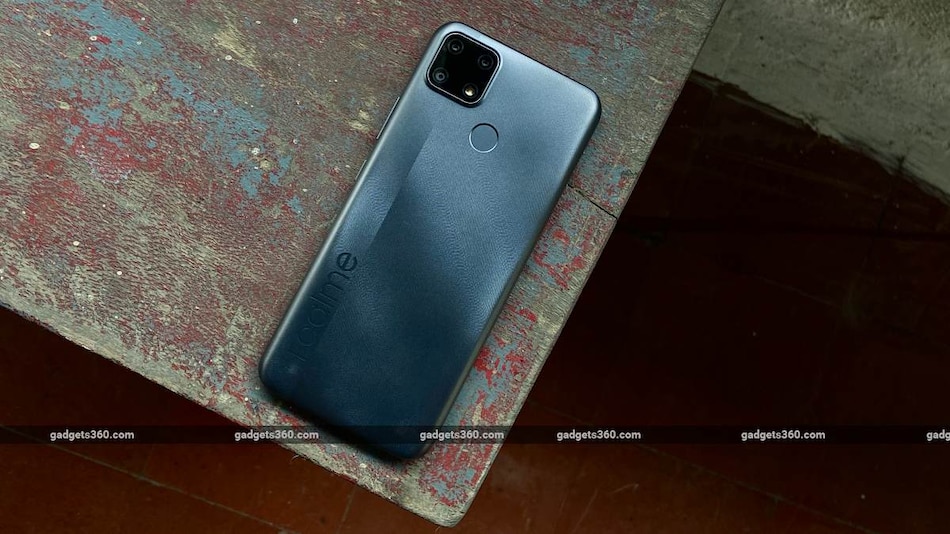 After launching the C12 and C15 with identical processors and similar features last year, Realme has decided to broaden the differences between the successors to these two models in 2021. The C25 (successor to the C15) gets a significant processor upgrade in the form of the MediaTek Helio G70 (instead the older Helio G35) but at the same time, drops the camera count from four to three.

However, despite having more power, the Realme C25 already has a very notable competitor which comes from the manufacturer's own stable, the Realme Narzo 30A (Review). Launched earlier this year, the Narzo 30A gets you an even better Helio G85 processor and has a lower starting price, but also has only two rear cameras. This might leave the Realme C25 in a tough spot, as it will have to lean heavily on its third camera, a 2-megapixel macro camera, to stand out. Can that feature make the Realme C25 worth its Rs 9,999 starting price? Or does the Narzo 30A make it irrelevant?

The Realme C25 is priced at Rs. 9,999 for the base 4GB RAM + 64GB storage variant, while the higher end variant with 128GB of storage is priced at Rs. 10,999. Both variants are available in new Watery Blue and Watery Grey finishes.

Just like the C15, Realme has gone with a plastic unibody with the C25. Its dimensions remain very similar to those of the Realme C15 (Review) and so does the overall design with a new textured finish and a bold, embossed Realme logo at the back.

The camera layout looks similar too, but with the C15's quad-camera setup replaced by three cameras, the LED flash makes its way inside the module. Also, at the back is a fingerprint reader, which is quick to unlock the phone.

The triple-card SIM tray sits on the left of the phone, while the volume rocker and the power/unlock buttons are on the right. The volume rocker sits well above the power button and is hard to reach without adjusting your grip.

Despite being made out of plastic, the phone felt quite bulky at 209g and this is mainly due to the 6,000mAh battery inside. The plastic back is quite prone to scratches, but thanks to the matte finish, does not pick up fingerprints. The fine grooves of the textured back and the rounded edges offer a solid grip.

The Realme C25, unlike past models, has a relatively powerful processor that helps it distance itself from the C21 and the C20. There's a 12nm MediaTek Helio G70 SoC with integrated Mali-G52 graphics, which is a noticeable upgrade over the Helio G35 in the C15. This SoC is paired with 4GB of LPDDR4X RAM. We received the 64GB storage variant of the Realme C25. There is also a 128GB storage option and both variants allow for expandable storage with a dedicated microSD card slot in the SIM tray.

Realme UI 2.0, based on Android 11, makes it to the C25. The user interface feels quite smooth in day-to-day use, but I did feel an occasional hiccup from time to time. Realme UI 2.0 has several customisations (for icon styles, notification drawer icons, etc.) and theming options, compared to the previous version. Also available are some Android 11 staples such as the revamped power button menu, grouped notifications, and more.

The Realme C25 does come with some bloatware

The bloatware is minimal and mainly comes in the form of some Realme apps such as HeyFun (for access to quick casual games), Community (forums), Finshell Pay (which refused to launch) and Realme Link (to connect with Realme's IoT products).

The 6.5-inch HD+ (720 x 1600 pixels) LCD panel is bright and vibrant not just indoors but outdoors as well. Text was legible, images were visible, and the camera viewfinder was easy to see even on sunny afternoons. Hampering visibility outdoors is the display glass, which I found to be relatively easy to smudge, and it picks up fingerprints within minutes of use.

The HD+ resolution works in favour of battery life. Also, most video streaming apps including Netflix will only support SD streaming on the Realme C25 because it is only Widevine L3 certified. Streamed content did not look sharp when stretched over that 6.5-inch display.

Given the MediaTek Helio G70 SoC paired with 4GB RAM, I did not expect much in terms of performance, but the C25 chugged along just fine in our benchmark tests and gaming sessions. The phone scored 214,116 in AnTuTu, as well as 386 and 1,278 in Geekbench's single-core and multi-core tests. The GFXBench T-rex test gave us 52fps, which is pretty much the baseline performance needed to make a simple 3D game look smooth.

While casual games worked just fine, I also tried playing Call of Duty: Mobile. With the graphics set to Low and frame rate set to Medium (the default settings) this fast-paced FPS title was just about playable. Still, I did notice that there were instances when the textures and the scene took an extra second to load up while playing the game. Asphalt 9: Legends had a few hiccups at the Default graphics setting but ran smoother with the quality set to Low. Given that this phone ran games at such low graphics settings, it's no surprise that it barely got warm during gameplay.

Playing games and streaming movies at these low settings didn't have much of an impact on battery life. Ten minutes of Frontline tournaments in Call of Duty: Mobile barely ate up 3 percent of the 6,000mAh battery capacity. The Realme C25 can easily last a day and half per charge with some gaming and a good two days without. Our HD video loop test lasted an impressive 27 hours and 2 minutes on a single charge. Charging up the phone using the included 18W adapter saw it reach 19 percent in 30 minutes and 37 percent in an hour. It took 3 hours and 7 minutes to reach 100 percent, which is quite a long time.

Compared to the Realme C15, the new C25 loses the 8-megapixel ultra-wide rear camera and dedicated low-resolution filter cameras. Instead, you get three cameras in total: a 13-megapixel f/2.2 primary wide-angle camera, a 2-megapixel macro camera, and a 2-megapixel f/2.4 depth sensor. That means the C25 has a triple camera setup instead of the quad-camera one that the C15 had. The selfie camera remains at 8 megapixels with an f/2.0 aperture. The camera interface is no different from what we have seen on other Realme smartphones in the past and is fairly easy to use, with most of the filters and toggles available at hand with the second layer of settings just a tap away.

Coming to image quality, daylight photos came out quite vibrant and colourful, and also showcased a good amount of detail in darker areas. The HDR system kicks in frequently, meaning that dynamic range is often in check, and I rarely ended up with an overexposed photograph.

However, shooting subjects using the primary rear camera resulted in some abnormally bumped up saturation levels, that clearly did not represent the actual scene. I tried turning off AI scene recognition in the camera settings, but it did not seem to help in any way. The Portrait mode was a bit off too, often overexposing both the subject and the background, although edge detection was still decent.

For a smartphone that costs less than Rs. 10,000, I was impressed with the digital 2X zoom that also delivers an impressive level of detail. Switch to 5X though and the results are mostly unusable.

Selfies shot in daylight came out quite sharp with neutral colours and decent dynamic range, with everything from the subject to the clouds behind them exposed properly. Portrait mode delivered equally good results in terms of sharpness and colour with good edge detection.

The macro camera (available when using the Ultra Macro camera mode) allows users to take photos with bumped-up contrast and sharpness. These were mostly usable but looked a bit too dramatic and lacked detail. I preferred cropping photos taken with the 13-megapixel primary camera, which showcased better colours and had the right amount of sharpness.

Once the sun sets, the quality of photos you can take deteriorates, with lots of noise becoming evident and textures seeming poorly defined. One might expect Night mode to do better, but this was not the case with the Realme C25. Photos taken using Night mode were brighter than those shot in the auto mode but had overdramatic contrast and blown-out highlights. These photos also lacked sharpness and were quite low on detail thanks to aggressive noise suppression. In short, I was better off shooting low-light photos using the auto mode.

The rear camera is capable of shooting video at up to 1080p 30fps. Videos taken in bright daylight came out a bit overexposed and lacked stabilisation, but looked decent overall. The same goes for the selfie camera, which also records at 1080p 30fps. The results in low light were a bit too noisy with reduced details in darker areas and shadows.

Priced at Rs. 9,999 for the base 4GB RAM + 64GB storage variant, the Realme C25 basically offers what we have come to expect in the budget segment. While the C15 was launched at a higher price (Rs. 10,999 for the 4GB + 64GB variant) last year, Realme has managed to offer a better processor with this model. The Realme C25 is also one of only a few smartphones with a 128GB storage variant that's priced below Rs. 11,000.

The performance gains that the MediaTek Helio G70 brings are quite noticeable and are enough to keep things running smoothly for casual users. Performance was somewhat of a problem with the C15, but on the other hand you don't get an ultra-wide camera, so there is a bit of give and take.

Buyers who want a more stock version of Android can choose the Moto G10 Power (Review), but will have to compromise a bit on the performance front. For those who want a bit of futureproofing, Poco's M3 (Review) is also a solid contender that offers good design plus the Qualcomm Snapdragon 662 SoC and 6GB of RAM at a slightly higher starting price of Rs. 10,999. Given the price fluctuations that Realme smartphones go through during the manufacturer's sales, last year's Narzo 20 (Review) is also a good alternative. It features the same Helio G85 processor as on the Narzo 30A but adds a 48-megapixel primary camera. Its price often drops to Rs. 9999 (from the fixed Rs. 10,499) for the base 4GB RAM and 64GB storage option, so it's definitely worth looking into. I would also recommend checking out our Best Phones under Rs. 10,000 guide to get a broader idea about the best phones you can buy in this segment.