Realme C25 Getting Early Access to Android 12-Based Realme UI 3.0

Realme C25 users will have early access to Realme UI 3.0 in batches. 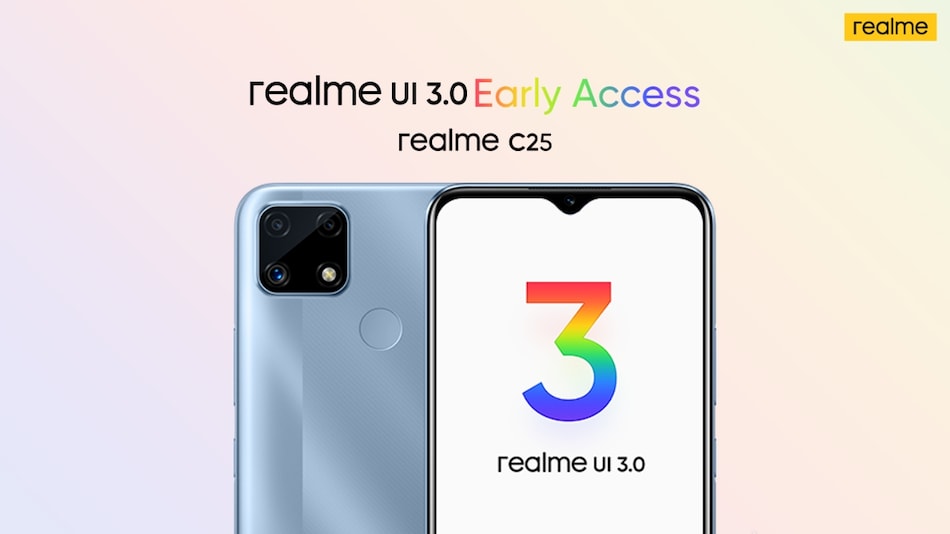 Realme C25 was launched with Android 11-based Realme UI 3.0

Realme C25 is getting early access to Realme UI 3.0 based on Android 12, the Chinese company has announced. Realme will be rolling out the beta software of its latest OS to a select number of users to allow them to experience new features of the upcoming Android 12-based OS. Realme C25 was launched in April last year with Android 11-based Realme UI 2.0. It features a 6.5-inch HD+ display, an octa-core MediaTek Helio G70 SoC, and a triple rear camera setup.

As per a blog post by Realme, the Realme UI 3.0 early access programme application channel for Realme C25 is now open. Applicants will be accepted in batches and only limited seats are available, Realme said. In a press note, the Chinese company detailed that Realme UI 3.0 “will improve functionality, fluency, customisability, security, and privacy” of the smartphones. It will also introduce Fluid Space Design and Sketchpad AOD, along with some features that help protect user privacy.

Through Fluid Space Design, Realme has used layers and colors to provide a sense of context and visibility to 3D icons. It says that the overall interface is now more straightforward, and intuitive. There is Smart Theming Engine, similar to Android 12's Dynamic Color feature, that automatically picks colours from the wallpaper and applies them across system elements. The Sketchpad AOD converts the portrait wallpaper into artistic AOD aesthetics which fades smoothly whenever a user unlocks the phone.

Realme UI 3.0 builds upon features of Android 12 such as enhanced app permissions control, privacy indicator that tells when an app uses the phone's camera, microphone, or location, and approximate location.

Furthermore, it is said to offer an easy switch functionality between Realme Book and Realme smartphone in terms of notifications, file transfer, among others. (edited)

As mentioned, this is an early access programme, which means some Realme C25 smartphone owners will be able to experience Realme UI 3.0 features before a wider rollout. Since it is a beta software, it is expected to have bugs and Realme recommends that the applicants don't install the early access software on their primary phones.

In order to apply for the Realme UI 3.0 early access programme, Realme C25 users will have to update their handsets to the required UI version -- RMX3193_11.A.25/ RMX3193_11.A.26, and have over 60 percent battery. Once this criterion is met, users of these Realme smartphones will then have to head to Settings > Software Update > Tap on the settings icon in the top right corner > Trial Version > Apply Now > Submit your details and finish the quiz.

It is to be noted that Realme has laid down some conditions for the Realme C25 early access programme. Users are needed to make sure their smartphones aren't rooted and they have a backup of their data. The handsets should also have more than 10GB of storage available to prevent update failure. Users can check the phone storage by heading to Settings > Additional Settings > Storage. The Early Access versions may have an unpredictable impact on your phone and effect on daily use, Realme has warned.