Inside the Mission Control Centre for 'Bharat ka Moonshot' 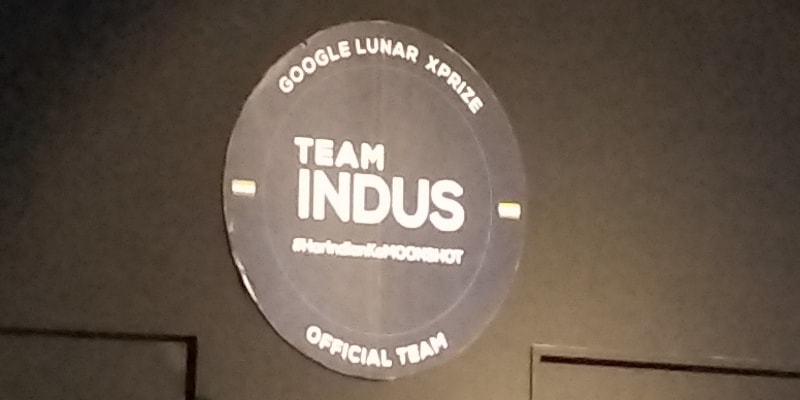 Picture this: you're in a darkened command centre, with several rows of desks - each with monitors on them - all lined up and facing a wall that's completely bedecked in screens. Screens on both sides are showing telemetry readouts and other technical details, while in the centre, the two main screens are showing the view from a Moon rover each. You can see one of the rovers in the other's feed, as they make their way across the uneven surface.

No, you haven't stumbled across a movie set in Hollywood - this is all happening in an old-looking building in Jakkur, a few kilometres away from the Kempegowa International Airport in Bengaluru. The rovers aren't really on the Moon - yet - but just a couple of rooms away, and the simulated lunar surface is just a healthy layer of sand. But it's possible that in just a few months from now, we might be able to watch this scene play out for real.

Last week, at its office in Bengaluru, Google Lunar XPRIZE finalists TeamIndus showed us some of the progress it has made on its Moon-mission, and unveiled its new command centre. An international panel of judges said that TeamIndus has made substantial progress in its mission, and the team is still aiming to make its run for the moon in December this year.

Visiting TeamIndus' control centre, we first took a look at the updated lander. It's carrying payloads for experiments, including a payload from students whose experiment TeamIndus will take to space. The lander is being tested ahead of the mission to see if it meets the various qualifications, and many of these have been completed, while a drop test will be done shortly, to confirm that it can accomplish a soft landing. The lander comes equipped with 16 thrusters as well as a main rocket, and apart from the various payloads - some of which are commercial payloads that go towards funding the project - it's also carrying two rovers, one from TeamIndus, and another from Japan's Team Hakuto.

Beyond that though, it's also an attempt to generate interest in space as a commercial prospect - teams can't raise more than 10 percent of the mission cost as government funding. The actual cost of the mission, explained TeamIndus Fleet Commander Rahul Narayan, is higher than the money being offered for the prize, but he added that the team has been able to raise significant amounts from private sources already. The XPRIZE moonshot isn't just about winning the race, but also opening up some serious business possibilities, while also pushing science forward, he added.

The XPRIZE is also an attempt to bring down the cost involved in space exploration. The various teams that are participating have been able to bring down the costs involved significantly, and this will also benefit future attempts as the baseline requirements for a moon mission go down. It can open up possibilities like asteroid mining, or the creation of regular moon missions that deliver various payloads at low costs, and more, over the years.

To win the XPRIZE, the teams have to first accomplish a soft landing on the Moon, after providing advanced notice of the launch and landing site. After landing, the team must move its craft at least 500 meters, in a deliberate manner. It must also send two "Mooncasts", at the lunar arrival, and at the completion of journey. These must be include eight minutes of video, a panoramic photograph, and technical data. There are also bonuses for achievements such as visiting an Apollo landing site, or finding water on the moon.

TeamIndus' lander with the rover visible in the front

Another member of the panel of judges is Derek Webber, a former satellite and launch vehicle designer, who points out that each of the five finalists has taken a unique approach to the Lunar XPRIZE challenge. "It's like a race of tortoises, as these very slow rovers make their way to the finish line," he says.

In the home stretch
The Lunar XPRIZE is work-in-progress that's been a decade in the making, and it's still not done. The deadline for completing the mission - as explained above - is March 31, 2018. Initially, there was also a 31 December 2017 deadline for the launch of the space mission, which had to happen this year. However, that deadline was removed, with the focus being on completing the mission, rather than the launch.

The field has narrowed from just over 31 applicants that could have made the cut, to only five finalists. Of these, one - Japan's Team Hakuto - isn't using its own lander. Instead, the team will be relying on the lander from Team Indus, and once the soft landing is accomplished, both teams will be racing to get their rovers towards their targets. The other teams have their own landers and launch plans, and asked about why Team Indus decided to work with Team Hakuto for part of the mission, Narayan said that while the contract between the two cannot be shared, the teams go back a long time, and have worked together to develop their systems.

Derek Weber, one of the judges of the competition, who has worked as a satellite and launch vehicle designer pointed out that each team has a unique approach, and so Hakuto and TeamIndus can share critical data even though they're competing.

Team Hakuto's rover is being carried on TeamIndus' lander

We didn't get to see the controls of TeamIndus' rover, but Hakuto's Sorato rover uses a control scheme that feels like a video game. A direction pad allows you to send commands to the rover, and you can guide it like a remote-controlled car - though keep in mind there will be a long lag when the vehicle is on the moon. The Sorata rover is so easy to use even children can operate it, a Team Hakuto spokesperson said, before pointing to the various sensors that capture information including the orientation, temperature, and other data around the rover.

Bharat ka moonshot
Back on Earth, emblazoned on the TeamIndus building is the phrase Bharat Ka Moonshot. Talking about its plans, Fleet Commander Narayan mentioned that the team plans to plant the Indian tri-colour on the Moon. But how far along is TeamIndus in its journey? Professor Alan Wells, who is the Chairman of the international panel of judges for the Lunar XPRIZE said that there are 10 steps of certification from the judges to complete the prize, and TeamIndus is now close to sign-off on the first one, with nine to go. That said, it has made significant progress on all of them, he added.

TeamIndus is on track to beat the March 31 deadline, Narayan said, though asked if it's still meeting the planned December 28 launch date, he said this was merely the first launch window that was possible for TeamIndus. "In each month, we have three-day launch windows available to us to complete the mission," he said. "So if we can make the launch as planned, then it's great, but otherwise, we have options after that for a successful launch as well. You'll know exactly when soon because we have to declare the date at least six weeks ahead of time, but we could launch in the first week of March and still meet our goals."

Having said this though, he added that a firm deadline like this one is helpful as motivation. "I am an engineer, as are more of the team," he quipped, "and you know with us, you only start studying the day before the exam."

He also talked about the challenges of funding the mission. Although it's been talked about as a huge step forward scientifically, as a privately funded mission, the Lunar XPRIZE is also working to create a commercial space ecosystem.

The payload for the moon - rover and lander
Photo Credit: TeamIndus

"The total cost of the program will be around Rs. 450 crore, out which more than half has been collected and spent and for the rest talks are on with sponsors and others who are interested in spending on this mission," he said. TeamIndus is now actively trying to raise the remaining amount from a number of private sources, and is going to announce a second, larger round of funding soon, Narayan disclosed.

The new phase of space?
The Lunar XPRIZE holds potential for bootstrapping a new space race, this time between companies rather than countries, and it's something that could have a lot of impact for people here on Earth as well. A number of technologies will be created and improved upon, ultimately finding their way to consumers like GPS and DTH did, Professor John Zarnecki, President of the Royal Astronomical Society, who worked on the Giotto mission that flew past Halley's Comet in 1985, points out.

Professor Wells says that space missions are "always cash-strapped, because of the high costs, so finding ways to do it cheaper is very beneficial. [In comparison] Curiosity and Soujourner cost billions, these are the benefits of miniaturisation." Adding that the long-term impact of the missions is going to be very considerable, as the little rovers still have "enormous potential for exploratory science, by virtue of their flexibility."

"It's orders of magnitude cheaper [than government-run missions in the past have been]," added Webber. "We're witnessing the beginning of a whole new industry here. There has been - and continues to be - a change in how space exploration is conducted since the Apollo era almost 50 years ago. New Space is for entrepreneurs looking for commercial opportunities that governments aren't interested in, like space tourism. There are all sorts of other potential new markets. Take asteroid mining. There are legal issues about ownership, but that's a later concern."

"There are potential lunar markets that can only be accessed by these cheap missions," he continued. "[Thanks to new companies that emerge from this start] it would be like paying for the taxi ride for all kinds of missions."