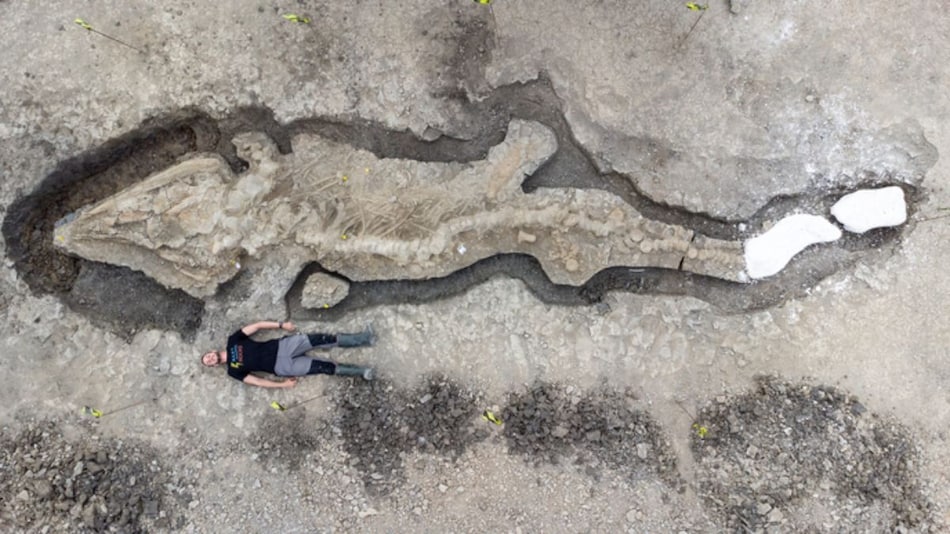 Researchers in the United Kingdom have found a colossal 180-million-year-old fossilised remains of an ichthyosaur, colloquially known as a ‘sea dragon'. The researchers describe it as one of the most significant discoveries in the region as the fossil is the biggest and most complete skeleton of its kind found in the UK. Ichthyosaurs resembled dolphins in body shape and became extinct around 90 million years ago, after first appearing 250 million years ago.

Discovered in a reservoir in Rutland county, the skeleton measures nearly 10 metres in length. Joe Davis, a conservation team leader from Leicestershire and Rutland Wildlife Trust, which operates the nature reserve in partnership with owner Anglian Water, found the specimen during some re-landscaping work which involved draining the water in the lagoon. He first spotted parts of vertebrae in the mud. What followed then was a large-scale excavation in August and September, said the Leicestershire and Rutland Wildlife Trust said in a statement.

Davis remarked that the finding was a “career highlight” for him, and went on to add that it was a feeling to even think that this creature once swam in the seas.

A report by CNN quoted Dean Lomax, an ichthyosaur expert and current visiting scientist at the University of Manchester, as saying that “the size and the completeness together is what makes it truly exceptional.” Lomax added that the earlier finds of ichthyosaurs in the UK had been “nowhere near as complete and as large as this.”

Stating that this discovery was only the “tip of the iceberg,” Lomax said that there was still much more to learn about the ichthyosaur when bits of rock were removed, including the potential that the reptile's last meal was preserved or that the reptile was pregnant.

Paul Barrett, Merit Researcher in the Earth Sciences Vertebrates and Anthropology Palaeobiology department at the Natural History Museum in London, told CNN that this was “one of the most impressive marine fossil discoveries from the UK that I can remember at least in the last 20 to 30 years or so.”