It was observed that the 2022 Tonga volcanic eruption caused waves of air pressure that reached as far as Australia and Japan. 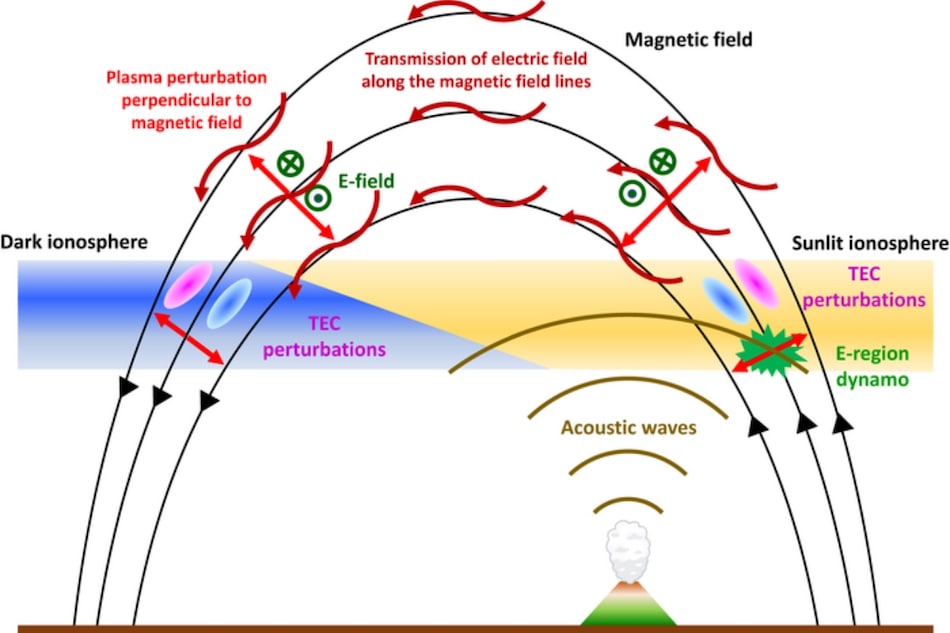 An underwater volcano erupted near Tonga in 2022 that caused destruction in the archipelago nation. The Hunga Tonga-Hunga Ha'apai volcanic eruption also spawned a tsunami that further caused significant damage in Tonga. Now, researchers at Japan's Nagoya University have used the data from the eruption and disturbances in the Earth's atmosphere to track the airwaves that led to the tsunami. The findings are now likely to help in predicting future giant waves and tsunamis.

During a tsunami, the lower atmosphere gets deformed while oscillation of sounds and gravity waves are generated, which cause disturbances of the electrons in the upper atmosphere. Radio waves from the satellites and those used in GPS pass through this layer of atmosphere that lead to errors in the positional information provided by GPS at the time of a natural disaster.

In the recent study, published in Earth, Planets and Space, the team of researchers used data from GPS and satellites to examine the errors caused due to the 2022 Tonga volcanic eruption. It was observed that the eruption caused waves of air pressure that reached as far as Australia and Japan.

These waves led to oscillation in the lower part of the ionosphere that in turn generated electric fields. The fields were then transmitted to the upper atmosphere at high speed. The scientists noted that the electron charges were detected earlier than the pressure airwaves that led to the tsunami.

“We captured the signal of the ionospheric disturbance caused by the air pressure wave about three hours before the pressure wave originating from the volcanic eruption believed to have triggered the tsunami in Japan,” said Assistant Professor Atsuki Shinbori, who is also the author of the study.

“In short, the significance of these results can be divided into two aspects: the scientific aspect of a coupled system, and the disaster prevention aspect of preparedness for severe events such as tsunamis,” Shinbori added.

According to the professor, analysing disturbances in the ionosphere during a volcanic eruption and monitoring the seismic events may lead to effective prediction of tsunami.