How Amazon Plans to Personalise Its Echo Smart Devices for India 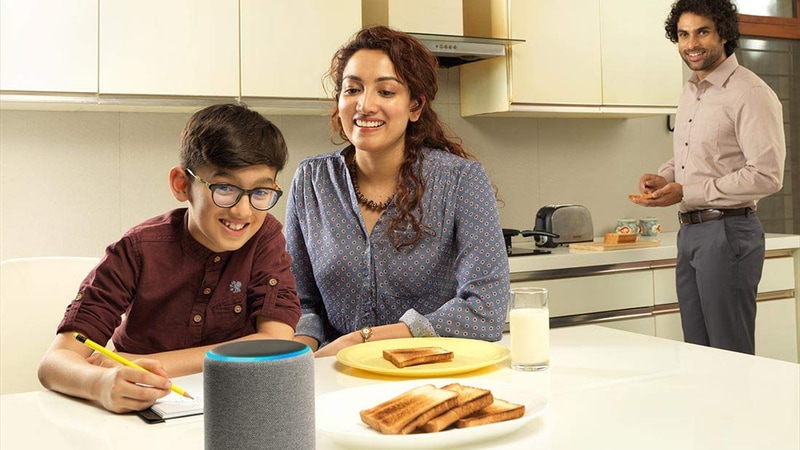 Amazon has a lot going on in India. It's been a year since Amazon launched Echo devices in India, powered by its smart voice assistant Alexa. The company most recently launched the latest generation products of Echo Plus, Echo Dot, and Echo Sub in India. Two more products — Echo Show and Echo Input — from a sea of products Amazon launched at its September 2018 event in Seattle are due to launch in India early next year.

Amazon's commitment to bringing its ecosystem to India can be seen by its excellent pricing for Amazon Prime, offering a pretty decent catalogue of shows on Amazon Prime Video, and bringing an increasing number of its products to the country at the same time as other important markets. However, the Echo lineup of products lacks one feature that'd make it a lot more useful in India — cellular connectivity. Mobile Internet is being used far more in India than home broadband and Wi-Fi, and Amazon is going to have to find new ways to make its products more useful in India. Gadgets 360 spoke with Amazon's Tom Taylor at the sidelines of the Seattle event to find out more about the company's plans for India.

When asked whether Amazon is looking at shipping an Echo device with a SIM card, much like the 3G Kindle devices it sells in the country, Taylor said, “This is certainly something we have heard from our teams in India because of spotty internet connectivity. That's all I'm going to say about that.”

One of the most exciting features Amazon announced at the same event is called Local Voice Control. This allows your Echo device to execute certain smart home commands even when the Internet is down. This kind of a feature would be perfect for Echo in India, where Internet connections aren't very reliable.

“In addition to smart home use cases we have something going on in the auto use case,” Taylor said, referencing the Echo Auto device for cars that was launched at the same event. “How much can we put on the device so we don't have to put it on the cloud? You can imagine that I go into a tunnel I still need to be able to talk to Alexa. That capability is there and we will continue to expand it.”

“Whether we use a SIM card or not I don't have anything to say at this moment,” he said, going back to our original question.

For Alexa and Echo to succeed in India, Amazon is going to have to do a lot better than supporting six primary languages (and their variations). While Google Assistant is available in multiple Indian languages, Alexa is far behind.

“Our India team keeps telling us: ‘Don't think of India as (a homogenous) country. It's 35 different... from cultures to languages'. The diversity of language is much greater than we have in any other country,” Taylor admits. “We'd love to expand languages. We think it's not just the languages, but the personality and everything else that goes along with it. It's something we are working on but we want to get it right. We wouldn't just want a machine translation of this language. We actually want to have great talent and great content that goes along with it.”

”It's a good question. It's something we are working on, no dates to announce. It's something that occurs in many countries,” Taylor said. He did add that Alexa is getting better at understanding different dialects of the same language.

“The more you interact with Alexa the better she can start to learn so she can better understand dialects. We are also adding these self-learning loops to Alexa,” he adds.

This means that Alexa will ask you a question such as: “Did I do this right?” after answering a query or executing a request, to learn what you actually meant when you issued a request. “If you play a song and within five seconds if you say stop the song, perhaps we did something wrong,” Taylor said, giving another example of a self-learning loop.

These features are helping Alexa improve at a rapid pace, but that creates another problem — discoverability. When Alexa can do a million things and it's really good at them, how do you make sure that people know it can do this as well? Taylor said, “We know that customers tend to do the same few things (Alexa capabilities) they learnt in the first few days.“ Taylor says the company is working on “conservatively” sending prompts via Alexa to show you that you can do more with the smart assistant.

This is the kind of thing that a person would be able to tell you without you feeling like they interrupted your day, but when Alexa does it, Amazon has to be careful because it could be perceived as an annoyance.

Taylor added, “A strong example of that is Hunches [a new feature where Alexa alerts you if you've left the lights on, among issuing other important reminders]. We very strongly believe in every feature in every device in every country. You should just start seeing more and more of Alexa saying, ‘Hey did you know you can watch that on TV and do you want to turn that on right now?', or ‘Hey did you know there is a movie about that?'.”

Disclosure: Amazon sponsored the correspondent's flights and hotel for the event in Seattle.

BlackBerry Evolve to Go on Sale in India on October 10, via Amazon
Eros Now's Next Original Series, Smoke, Gets Trailer, Release Date