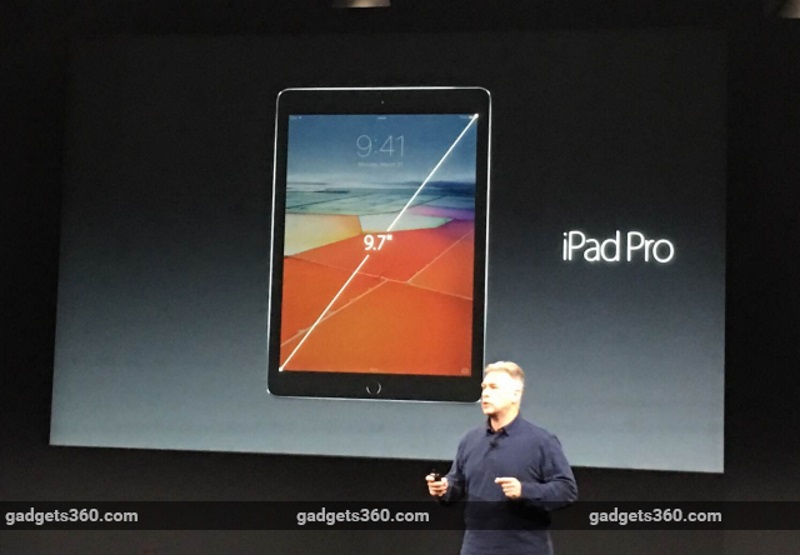 At its much-anticipated 'Let Us Loop You In' event in Cupertino, California, Apple announced the latest addition to its tablet lineup: the 9.7-inch iPad Pro (Wi-Fi | Cellular). The tablet packs in largely the same innards as the iPad Pro that Apple had launched last year in a smaller, 9.7-inch form-factor. Much like its bigger sibling, the new iPad Pro also supports the Apple Pencil and has the Smart Connector for detachable Smart Keyboard.

The smaller iPad Pro is the company's attempt to lure a wider audience. The last year's iPad Pro was considered too large by many who were primarily looking to purchase a tablet for content consumption.

The new iPad Pro is a true successor to the iPad Air 2, which Apple had launched in 2014. The new iPad Pro offers an improved True Tone display, which  adapts its tone and brightness in accordance with the environment you're using the tablet. Additionally, the iPad Pro will house a four-speaker setup.

The 9.7-inch iPad Pro comes with the same processor as its bigger sibling: the A9X. On the photography front, the 9.7-inch iPad Pro sports a 12-megapixel iSight camera with Focus Pixels, True Tone Flash, new image signal processor. On the front side, there's a 5-megapixel FaceTime camera. It is worth noting that these camera sensors are same as the iPhone 6s from last year. The iPad Pro also supports Live Photos.

Apple SVP Phil Schiller noted at the event that the company has sold more than 200 million 9.7-inch iPad tablets. There are more than one million iPad apps in the App Store.

The 9.7-inch iPad Pro will be available to order beginning Thursday on March 24 from Apple.com, and through select carriers and Apple Authorised Resellers on March 31, in Australia, Canada, China (Wi-Fi models only), France, Germany, Hong Kong, Japan, New Zealand, Puerto Rico, Singapore, the UK, US Virgin Islands, and the US.