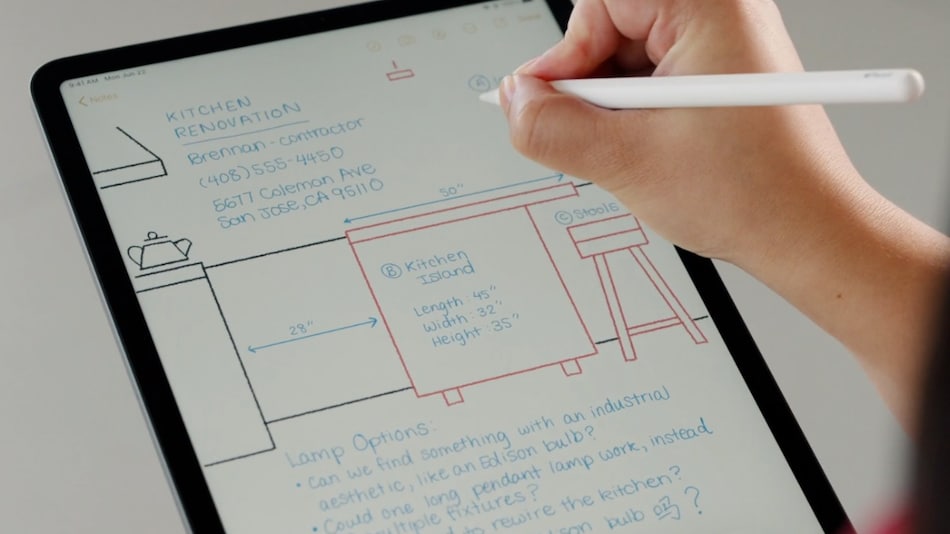 Apple has unveiled iPadOS 14, watchOS 7, and new features and functionality for AirPods and AIrPods Pro, among the many announcements made at the WWDC opening keynote. iPadOS 14 gains all the features first shown off in the earlier iOS 14 demo, along with new tools and optimisations that are specifically aimed at getting the most out of an iPad's large screen and Apple Pencil compatibility. The improvements to watchOS 7 include better watch face management, sleep tracking, new workout types, and hand washing instructions. The new operating systems for Apple's portfolio of devices will be available later this year.

The main UI improvement dedicated to Apple's iPad and iPad Pro models is the sidebar element, which has been added to multiple first-party apps including Apple Music, Mail, Notes, Calendar, and Photos. The sidebar will let people quickly jump between sections, and also to drag and drop content between things such as playlists and photo galleries.

Another improvement specific to Apple Music is a new Now Playing screen that has room for live song lyrics to scroll in sync with the music, alongside playback controls.

Apple's first-party apps get a new sidebar for navigation

iPadOS 14 introduces a new search interface with the whole function being rebuilt to work more like macOS's Spotlight pop-up search bar. You can launch apps, find contacts, and even jump to websites, and iPadOS will autocomplete as you type.

Users might also appreciate the new incoming call UI, which uses a notification-style popup at the top of the screen rather than obscuring the entire interface, interrupting whatever you're doing. This works in iOS 14 on iPhones as well.

There are many improvements to Apple Pencil functionality on compatible iPads, aimed at making scribbles and handwriting input smoother. You can now write with the Apple Pencil directly into any text field such as Safari's address bar or the new search UI. Apple demonstrated support for English and Mandarin handwriting recognition. This lets you multitask without having to put the stylus down to type using the keyboard.

Apple Pencil can also be used to make sketches look more professional, just by pausing after completing a line or shape. Users can now select what they've written and convert it to text instantly. It's also easier to rearrange scribbled content on a page to make space for new things. iPadOS 14 will also recognise things like contact names, addresses, and phone numbers that have been handwritten, allowing users to use them to trigger actions.

Not mentioned during the WWDC presentation, but teased on screen, iPadOS 14 also gets a new version of ARKit and a new depth API to help with augmented reality applications. It will also help leverage the LiDAR scanner on the latest iPad Pro models.

Also not mentioned, but reported by The Verge, iOS 14 and iPadOS 14 will allow users to set third-party email apps and web browsers as their defaults, in a break from Apple's tight control over the user experience. This has also been a much-requested feature for years.

Sleep tracking is a long-awaited feature. Compatible Apple Watch models can help users with a downtime routine, pre-set sleep goals, and a UI showing important information in the morning. Silent haptic alarms can help a user wake up without disturbing others.

New workouts that can be detected include dance and core training. The iOS Activity app has been renamed to Fitness and gets new visualisations of activities.

Other features include cycling directions through Apple Maps, Siri translations, and mobility metrics.

AirPods and AirPods Pro can now switch between multiple Apple devices instantly, depending on which ones audio is playing from. Spatial audio for AirPods Pro allows for surround sound and directional audio effects with the sound sources staying in place even when a user moves their head or is in a moving vehicle.

PDF to PPT: How to Convert for Free on Computer, Phone
WWDC 2020: iOS 14 Unveiled With App Library, Redesigned Widgets, Upgraded Siri, and More