Switch Mobility's EiV22 electric double-decker AC bus is powered by a 231 kWh capacity battery pack, with a range up to 250km for intra-city transport. 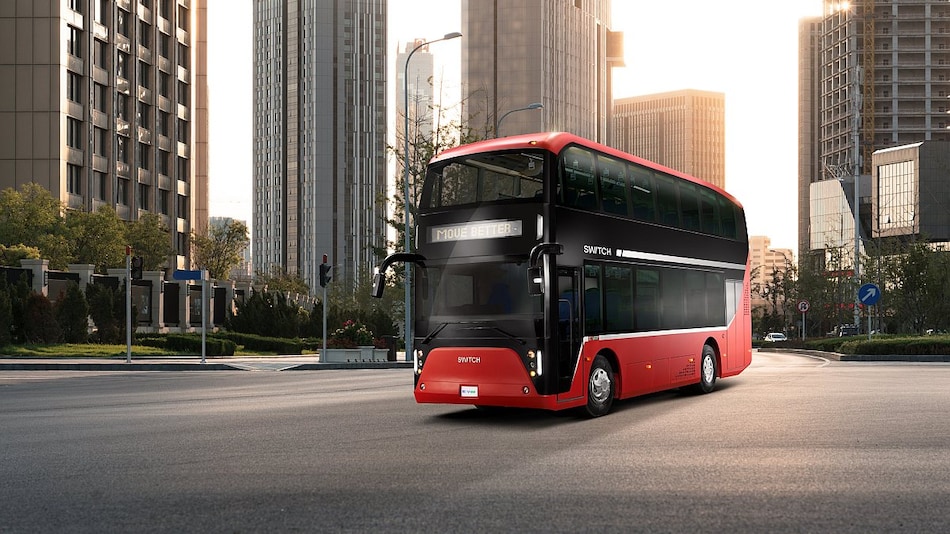 Switch Mobility, the electric vehicle division of Hinduja Group's flagship Ashok Leyland, unveiled its EiV22 double-decker electric bus on Thursday. The introduction of these 66-seater buses will help Brihanmumbai Electricity Supply and Transport (BEST) switch its current fleet of double decker buses to electric as it looks to make commuting green by 2028.

"Ashok Leyland was a pioneer among Indian manufacturers when it first launched the double-decker in 1967 in Mumbai and Switch is carrying forward that legacy. With our strong expertise in double-deckers, both in India and UK and with over 100 Switch electric double-deckers in service on UK roads, we reinforce our commitment to create this form factor (design) for India and the globe," said Dheeraj Hinduja, Chairman, Switch Mobility.

Today there is no double-decker market in India, which is going to change because cities are growing and getting congested, said Mahesh Babu, Chief Executive Officer, Switch Mobility India, and COO at Switch, said.

"Everybody is looking at the pilot happening in Mumbai. If Mumbai is successful, I believe this will open up a whole market," Babu told PTI.

The electric double-decker AC bus EiV22 is powered by a 231 kWh capacity battery pack with dual gun charging system, which allows the bus to have a range up to 250 kilometres for intra-city transport, according to the company.

"The Switch EiV 22 is designed and developed to meet Indian conditions. Mumbai and double-deckers are synonymous with public transport, and we are certain that EiV 22 will transform the public transport space in terms of sustainability and footprint," said Babu.

Switch has secured the order for 200 buses from BEST, which it plans to deliver by next financial year in tranches and is open to "participate" if the autonomous body comes up with another tender, he said.

In April this year, Switch Mobility announced an investment of GBP 300 million to develop a range of electric buses and light commercial vehicles in India and the UK.

Switch India expects to get a major chunk of this investment in the initial phase considering the pace at which electrification of the vehicles in the country and also the volumes which are much higher compared to the UK and Spain.

But it will also depend on the market, how it grows, he added.

According to him, the latest double-decker bus offers 86 per cent more capacity compared to a single-deck, which has been made possible by increasing the weight of the bus by 18 per cent.

Moreover, it takes 41 per cent less space in comparison to a regular single-floor or decker and therefore can offset 32 cars on the road, and can lead to substantial reduction, he said.

"The Group has a clear vision to support economies in delivering their net zero objectives through renewable energy, finance and zero emission transportation. We are confident that our new zero emission double-decker bus will deliver a cleaner and more sustainable future, reinforcing our commitment for India and the globe," said Ashok Hinduja, Chairman, Hinduja Group of Companies (India).

Switch had in March announced its entry into continental Europe with a greenfield facility in Spain.

For India, Babu said, the company is looking at a dedicated facility but not in the near future as it is using the multiple assets of the company.

"We are using these facilities to scale up. In parallel we are looking for a dedicated facility for Switch. It is not decided [by when]. If we decide now, it [the 9th facility] will take two years to come up," he said.

Babu, however, said that the company has a capacity to produce 2,500 buses, which it will be able to ramp up to 5,000 in a short span of six months.