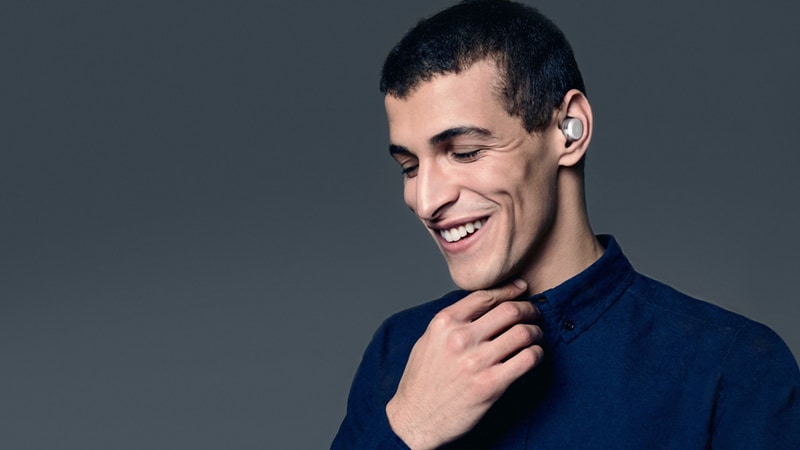 In countless movies and TV shows set in the future, one commonly seen object is a small earpiece that acts as a wearable computer. Using it, the wearer is able to perform tasks by interacting with a voice-based, possibly artificially intelligent interface. Well, there’s no need to keep gazing, because that future is here.

There are two ways of looking at Apple’s removal of the 3.5mm headphone jack from the iPhone 7 — the death of a revered universal standard for wired audio, or a subliminal push towards wire-free audio in the near future.

Bluetooth headsets don't have to be just plain old Bluetooth headsets. With every electronic device having a tiny computer inside it now, there are some novel features that can be implemented that makes a headset, ‘smart’. So without further ado, here are some interesting smart headsets we’ve come across, that do more than just streaming music or receiving phone calls.

1. Waverly Labs Pilot
The Pilot by Waverly Labs is an homage to Babel Fish, a fictitious alien fish that performs instant translations in The Hitchhiker’s Guide to the Galaxy. It is a pair of wire-free earphones and a supporting app that work together to perform real-time translation between two people talking in different languages. You can offer one of the two earbuds to another person and hear each others’ translations, or use them both yourself to wirelessly listen to music as well.

The other person can also use their app in place of the earbud. While the initial version will require cellular connectivity, the company says an offline mode will be available at a later stage, which will be useful when you’re overseas and/ or have no cellular coverage.

Currently, services like Google Translate have a conversation mode where two speakers of different languages can participate in a dialogue. Skype Translate is pretty seamless, but is designed for remote communication. The USP of the Pilot is a seamless experience of talking face to face, without having to use your phone, and hearing the translations directly in your ear instead of the phone speaker.

You’ll notice in the demo video, the speakers are enunciating precisely, and that’s because the Pilot “is not perfect and it will make mistakes sometimes”, according to the product’s Indiegogo page. But as is the case with artificial intelligence systems, it further states that “the more people use it the better the translation engine becomes”. There’s also no word yet on the battery life of the earpieces.

You can pre-book the Pilot from the aforementioned page at $199 (roughly Rs. 13,280) and the product is said to ship by May 2017. At launch, it will support translations between English, Spanish, French, Italian and Portuguese, with other languages being added with software updates in the future, though remember not all crowd-funded projects ship.

The Dash boasts itself of being a “discreet personal assistant in your ear” with gestures that accept a phone call when you nod, or decline when you shake your head. The computer-generated voice also gives you audio feedback of your stats during a workout. The Dash is also a music player, with built-in 4GB of internal storage, so you don’t have to carry your smartphone while exercising and listening to music.

Continuing the laundry-list of features, the Dash also sports an ‘Audio Transparency’ mode. Turning it on will lower the playback of the audio and instead tunnel ambient sounds the microphone receives directly into the earpieces. This way, you can listen to the surroundings clearly without having to take them off. Bragi claims a battery life of up to 4 hours and the bundled charging case can replenish power in the earbuds up to five times. The company also has committed to push software updates to the Dash, adding features and improving performance post the purchase of the device. You can purchase the Bragi Dash at $299 (roughly Rs. 19,950).

Alternatively, you can also look at the Samsung Gear IconX, which offers similar functionality, and is on sale in India for Rs. 13,400.

3. Doppler Labs Here One
The Here One from Doppler Labs is an augmented audio device for selective listening. That’s right, with smart noise filters you can drown out noises like that of an airplane engine during flights, background chatter in an office or the screeching sounds when traveling inside a subway train. It's like a noise canceling headset, but a lot smarter. The accompanying app also has an equalizer with presets, using which it claims to improve your listening experience of a live concert, or the ability to hear someone in a crowded restaurant. Watching a movie and you want to turn the bass down without affecting others? The Here One has you covered. There are also fun effects that you can turn on and find humor in otherwise typical conversations.

The app also learns your auditory preferences over time and provides suggestions for based on your environment. Other than augmenting the sounds around you, the Here One is also a traditional Bluetooth headset that you can use to listen to music or take phone calls. There’s no mention of how long the battery on the Here One lasts. You can pre-order them at $299.99 (roughly Rs. 20,000) here and it expected to ship by the end of 2016.

4. Muzik One
In this list of truly wirefree earpieces, the Muzik One looks like a typical headphone, and it is, for the most part. The Muzik One connects to devices via Bluetooth and can maintain a connection for up to 50 feet. The outer surface of these headphones is touch-sensitive and can be used to play/ pause music and invoke your phone’s assistant (like Siri or Google Assistant). The programmable hotkeys can be customised with the bundled Muzik Connect to perform various actions. For instance, you can play a playlist from Spotify, share the song you’re listening to on Facebook or Twitter with one tap, and more.

With IFTTT integration, you can also program the button to perform preprogrammed functions using the popular “if this, then that” app. Bundled in the package are two types of ear cushions that either go on the ear or over the ear. When compared to the rest of the headsets, the Muzik One owing to its large size, can also last longer for up to 30 hours on a single charge. Finally, if you like, you can also use a 3.5mm cable to connect the Muzik One to its source. They are available at $299 (roughly Rs. 19,500).

5. Apple AirPods
If you’re looking at this particular listing and asking “aren’t AirPods just wireless Earpods?”, well then that’s only half the story my friend. Keeping aside the design choice that has made it the butt of many jokes, there are some interesting features that do qualify this as a ‘smart’ headset. First, if you’re engulfed in Apple’s ecosystem of devices, you’ll benefit from the seamless transition of using AirPods between your iPhone, Mac or Apple Watch. So when you start playing audio on any of your iDevices, the AirPods will automatically work with them, which is easier than having to change Bluetooth audio sources manually. Also easy is pairing, as simply removing them from the charging case invokes automatic pairing with your iPhone nearby. Motion sensors also pause the audio the moment you take them off your ears. It's only a matter of time before third-party apps figure out more uses for these sensors.

Next, the same sensors can determine when they’re placed in your ear, and you can invoke Siri by double tapping the exterior. The virtual assistant can be used for performing all tasks that you otherwise would with her on an iPhone. The battery life of these AirPods is rated at five hours, and the charging case can re-power them roughly five more times. They cost Rs. 15,400 in India.

There are also some headsets we'll give a passing mention to — like the Vigo, which we honestly had to double-check to ensure wasn't an April Fools joke. Also not to forget the Motorola Hint, which has some smarts built-in, but is largely a typical Bluetooth headset. We'll close with this — with Bluetooth headphone sales surpassing wired headphones in some regions, it's a signal that more people are interested in a wireless future. And we can only hope that with innovative thinking like how it's applied to the ones above, will make this future a lot more colourful.

Reliance Jio's Ragging, Nokia at MWC, Xiaomi's Bendable Phone, and More: Your 360 Daily
MakeMyTrip and Ibibo to Merge Under the MakeMyTrip Brand