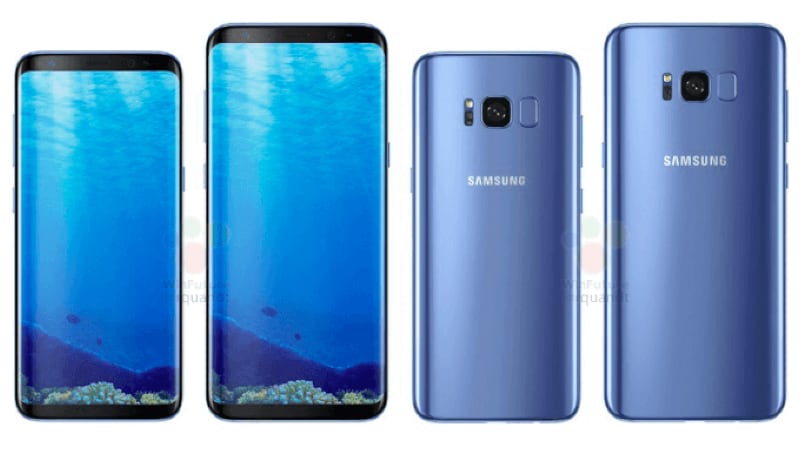 A day before the official Samsung Galaxy S8 launch, images, and specifications of the smartphone – and its bigger sibling, the Galaxy S8+ – have leaked once again. The image shows both the smartphones next to each other, giving a look at difference in size between the two. The upcoming Samsung flagship smartphones have also been spotted on a the AnTuTu benchmark app, revealing specifications such as Snapdragon 835 chipset for the US and Exynos 8895 processor for international markets, 4GB of RAM, 12-megapixel rear camera, 8-megapixel front camera, 64GB internal storage.

A separate Galaxy S8+ leak suggests that the smartphone, said to have a 6.2-inch display, will be significantly taller and thinner than its predecessor, Galaxy S7 Edge. We just have to wait one more to day to find out whether the reports so far are bang on with their leaks, or if Samsung has something that tipsters have been unable to leak over the Internet.

While you wait to the biggest launch for the next few months, here are the other important tech news of the day:

Moto G5 India launch scheduled for April 4
Just weeks after Moto G5 Plus hit the Indian market, Lenovo is launching the Moto G5 in the country as well. The Moto G5 India launch event is scheduled for April 4, and the smartphone will an Amazon-exclusive; its sibling, on the other hand, is exclusively available on Flipkart. The upcoming Moto smartphone has a 5-inch full-HD screen, 1.4GHz Snapdragon 430 SoC, up to 128GB microSD card support, 13-megapixel rear camera with dual-LED flash, 5-megapixel front camera, 2800mAh battery, and Android 7.0 Nougat operating system. The smartphone comes in two variants – 16GB storage + 2GB RAM, and 32GB storage + 3GB RAM. The Moto G5 launch happens to coincide with the India launch of Sony Xperia XZs smartphone, we also learnt today.

iOS 10.3 update brings cricket scores, Find My AirPods, and more
Apple has released the iOS 10.3 update for supporting iPhone, iPad, and iPod touch models, bringing a several new features and updating numerous existing ones. With iOS 10.3 on board, Siri will be able to show live cricket scores from IPL and ICC matches and give ball-by-ball updates, match schedules, player rosters, and even trivia. For iPhone 7 and iPhone 7 Plus users, the update also brings the Find My AirPods feature that will help you locate your AirPods in case you lose them nearby. Other iOS 10.3 features include support for scheduling with ride booking apps, daily curated playlists and new music categories in Apple Music on CarPlay, and support for “parked car” in Apple Maps, among others. Along with iOS 10.3, Apple has also released the macOS Sierra 10.12.4, watchOS 3.2, and tvOS 10.2 updates.

Nokia 8 rumoured to have dual-camera setup, Carl Zeiss lens
The rumoured Nokia 8 will have dual-camera setup on the back and Carl Zeiss lens, while the Nokia 7 will feature single-camera setup but have the same lens, according to sketches leaked on Chinese social media site Baidu. The current Nokia Android phones – Nokia 3, Nokia 5, and Nokia 6 - have neither of these features. One of the sketches shows that Nokia 8 will be the more premium model of the two. Previous leaks said that the two smartphones are powered by the yet-to-be-released Snapdragon 660 SoC, but not much else is yet known about the Nokia duo.

Amazon buys Middle East’s biggest online retailer Souq.com
Amazon has acquired Souq.com for an undisclosed amount, saying that this move represents its entry into the Middle East e-commerce market. The deal is expected to close in 2017, an official statement said. The deal comes just a day after Emaar Malls PJSC, operator of Dubai’s biggest mall, in a regulatory filing said that it offered to acquire Souq.com for $800 million (roughly Rs. 5,207 crores).

COAI wants DoT to check handset quality over call drops
The Cellular Operators Association of India (COAI) has asked the Department of Telecom (DoT) to create a framework to regulate the quality of mobile devices India in order to tackle call drops. Saying that the role of handsets has not been adequately considered in the issue, COAI has sought an urgent intervention to address “the massive influx of untested and uncertified smartphones (more than 10,000 models in India) due to design variations introduced by the device manufacturers.” The COAI letter also mentions cases of degradation of data in dual-SIM LTE smartphones, specifically regarding “chipset-specific implementation by MediaTek.”

Truecaller 8 update brings SMS inbox, flash messaging, payments
Truecaller has released the Truecaller 8 update for its Android app that brings a host of new features, such as SMS inbox that allows you to filter spam texts, flash messaging to send pre-defined messages to other Truecaller users, and Google Duo integration for video calls. But the most notable feature is Truecaller Pay, which allows users to send or receive money on your smartphone. Users will be able to transfer money using any UPI ID, or mobile number registered with the BHIM app.

In addition, the Airtel Truecaller ID, which brings the app’s caller ID function to feature phones (even those without Internet access), was launched today. Callers will be identified from Truecaller's database, and the information will be sent to Airtel customers via a Flash SMS before the call hits their phones.

Moto X 2017 images, specifications leaked
Moto X 2017 has leaked once again, with images and specifications surfacing online, but without any mention of its launch plans or price. The leaked Moto X 2017 images show that the smartphone will have a Moto Z-like circular camera design with dual camera setup, while the front camera will be supported by LED flash. The images also suggest that an oval-shaped fingerprint sensor will be in front and the body will be metallic, while the bootloader screen says it will have the Snapdragon 625 processor, 3GB of RAM, and 32GB internal storage.

Elon Musk launches Neuralink to merge AI with human brain
Tesla and SpaceX founder Elon Musk has reportedly launched a company called Neuralink Corp, which will attempt to merge artificial intelligence (AI) with human brains. The company will focus on the possibility of implanting tiny electrodes on the brain that may someday allow people to upload or download thoughts, which Musk calls the “neural lace” technology. Neuralink has not been officially launched yet, but it was registered as a medical research company in Calfornia in July 2016.